Learning to Develop a Global Mindset: An ASTD Foundational Competency

How does a global leader turn challenges into opportunities?

In our blog, we have been following Tom Rush, a newly promoted global project team leader. When he accepted the position in May, he thought his experience with U.S.-based remote workers would serve as a resource for this geographically dispersed team. He quickly learned that aligning a team across cultural, linguistic, generational, and gender divides was more than just challenging, it was an opportunity to rethink everything he had learned in management training. This was far more complex than he could have imagined. After six months on a steep learning curve, Tom finally admitted that his manager, Carlos, really meant well when he had suggested Tom get a coach.

Tom interviewed three global executive coaches from the list that Lee, the Senior HR Director of Global Talent Management, had given him before choosing the coach he felt the most at ease with. This coach clearly defined the roles and responsibilities of the coaching agreement. She actively listened as Tom explained his background, the past six months, and then, with just two powerful questions, almost got him to laugh out loud.

First she asked, “In your new role, what does success look like?”

Tom realized that if someone had asked him this question six months ago, his answer would have been entirely different. OK, not entirely different because surpassing sales figures was still the driving force behind the strategic success of his new role, but Tom’s personal vision of what success looked like was very different.

The coach then asked, “Knowing what you know today, what would you have done differently and what will you do differently in the next six months?

Over the last six months, Tom had learned that the words accountability, empowerment, and ownership didn’t even exist in some of the native languages of his worldwide reports. He couldn’t help thinking that if the word didn’t exist, how could the concept? Many of his new reports had 10 to 15 years of experience in corporate cultures that were totally different from that of ISO, the only company Tom had ever worked for since leaving college.

Aligning and motivating people whose experience had been more hierarchal, formal, and status-oriented compared to egalitarian, informal, and achievement-oriented proved to be quite the challenge. There has been a lot said about a flatter world or more global mindsets, especially with the millennial generation, but Tom found out the hard way that culture really does eat strategy for breakfast.

In the coach’s non-judgmental presence, Tom reflected on what he could have done differently, his recent past and present expectations, and what he had learned from his reports and colleagues—Jack in Hong Kong, John in Taiwan, Saatar in Qatar, Philippe in France, Manfred in Germany, Julia in the United Kingdom, Sven in Sweden, Pascale in Canada, and Bob in California. At first, Tom had thought he needed to change his own behaviors to culturally fit each of these very different people and nationalities, but that made him come across as indecisive and inconsistent. When he thought back to the conversation he had with John, a seasoned global colleague in Taiwan, he remembered asking if there was a list of dos and don’ts. John had replied with a chuckle: no such thing. No list, no magic wand, not even a drinkable potion. That’s when Tom had felt really lost. What would turn him into a global leader?

After the sponsor meeting that the global executive coach organized with Tom, Carlos, and Lee, she sent out a stakeholder survey based on the 4R principles. The various perspectives helped Tom to see how he was perceived and even more so, the feedback gave him insights into what his stakeholders appreciate, expect, and want more of. It is only through constructive, on-going feedback that we can learn what needs to shift in us in order to bring out the best in others. This is an often overlooked or underappreciated process in many organizations.

During the coaching process, Tom concluded that to understand other cultures, he needed to first understand his own. He completed an online cultural profile that his coach had set up, which was a good starting point for Tom to see how aligned he was with the U.S. profile. He learned that culture is complex—layered like an onion and as hard to melt as an iceberg. Tom’s innate curiosity and relationship-oriented approach were key qualities to success, while his outgoing personality was both a strength and a weakness. He reflected on how informal, solution-oriented, and efficient characteristics were sometimes seen as arrogant by others. To succeed, he had to let go of his drive to just do it, prove it, and wrap things up quickly and concisely. It wasn’t worth trying to control time in some situations, whereas it needed to be managed closely in others. The challenge was how to find the balance. Having this truly global experience and accepting vulnerability—willing to trip up, admit it, and get back up again—was an opportunity. Simply said, Tom needed to take his work seriously, rather than himself. 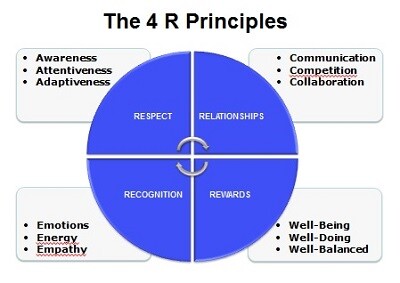 In addition, Tom’s global executive coach was helping him reflect on his own coaching skills. He was learning to apply the 4R principles of human needs: respect, relationships, recognition, and rewards. Research has shown that people will follow you if they find commonalities in the way you do things or who you are. For global leaders, strategically knowing how to frame the why of corporate decisions; when to extend a trip abroad by a day or two to meet up with people outside the meeting room; and how to set the pace and give people the space to vent as well as to celebrate personal and professional stepping stones, not only milestones, have proven to be especially beneficial. Lingering over lunch or around the water cooler (sometimes disguised as a coffee maker or photocopier) should be used to stay in the loop. Understanding that in many cultures outside the United States, a professional and personal division of time and information is often misunderstood by eager, efficient-minded, low context communicators who feel a need to share anything and everything about their personal lives. Above all, learning to laugh more, together, leads to high performance teams across cultures, languages, generations, and gender.

On February 11, Maureen will be signing books and presenting the ASTD T&D Area of Expertise Competency Model with the foundational competency model of global mindset at the South Florida ASTD Chapter. Read more and register here.

On February 13, she will be at the Space Chapter in Melbourne, Florida. Register today to learn more about coaching with a global mindset.