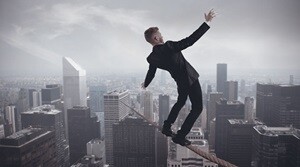 “While technology is young people's oxygen, risk may be their carbon monoxide," stated Inc. magazine, in its May 2015. This statement was a clear response to the decrease of upstart entrepreneurs in this generation as opposed to other generations. According to the magazine, young people (25-35 years old) launched 35 percent of start ups in 1996, young people start ups only made up 18 percent of the market in 2014. Indeed, although innovative and team-oriented, Millennials may be the most risk-averse generation. But why?

We all know that life experiences shape our outlook of the world. Millennials grew up during a time of great prosperity (the Clinton years) when they were the smartest, healthiest, and wealthiest children on the face of the earth. That world was smashed apart by the acts of 9/11, two wars, and the Great Recession.

In 2001, Millennials (who were mostly in middle school and high school at the time) watched as the very fabric of safety and security was destroyed as the Twin Towers fell. In the coming years, Millennials would make up the majority of recruits that were shipped off to fight a new type of war—a war against a belief—terror. Additionally, Millennials witnessed the destruction of the American economy and the very real consequences as their parents lost their jobs, their 401k and their livelihood. On top of all of that, this is a generation where credit card and college debt will enter the trillion dollar range. This obviously affects home ownership, retirement investments, car purchasing, and the ability to take on small-business, entrepreneurial loans.

Bottom line: The Millennial population is in a perpetual state of safety and security, if we look at it from Maslow’s Need Theory perspective. This leads to the risk-averse reaction we’re currently seeing among this cohort.

The challenge is that our current global workplace will not tolerate timid thinkers, doers, and entrepreneurs. There is very little room even in our offices for risk-averse workers, as we ask our young people to do more with less and to do it with exceptional speed and quality. Many times you will hear Gen-X managers complain that several of the tasks that need to be done by the younger worker are halted or slowed because the Millennial is afraid of making a mistake, being wrong, or taking a risk.

This sort of thinking and action could be detrimental to the development and growth of our young workers, as well as our products and services. What can we do as training and development specialists to encourage a more risk-taking, forward-moving mindset in our Millennials? Here are some thoughts, but I encourage others to weigh in.

It’s not failure, it’s just 2000 ways not to do it. Thomas Edison was famous for saying, “I didn’t fail. I just found 2000 ways not to make a light bulb,” when he was asked how he dealt with the frustration of failing a lot before succeeding. We need to build the mindset in our organizational culture that we are pioneers, explorers, and revolutionists who are discovering many ways not to do something in order to get the final product or service right. Don’t encourage failure, encourage tests and trials to discover new ways to do things.

Have the “Belief/Behavior Conversation.” We’ve talked about this before. We can’t do anything to change a mindset or belief if we don’t even talk about it. Have a conversation with your Millennial workers: Do they believe they’re risk-averse? Why? Do they believe the organization encourages risk-taking? To what degree? Do they think they would get in trouble for taking more risks? The Belief/Behavior Conversation uncovers the belief (and works to build possible discrepancy in that belief if need be) in order to drive proper behavior and attitude in the future.

Think Yes, before saying No. This is one idea we often encourage in training, and it’s the idea that so many of us after hearing an idea or initiative say, “No, can’t be done, we’ve tried that before, it’s too risky…” before we ever think, “Yes, what if…” It’s just the nature of who we are as humans. We are constantly critiquing and avoiding pain as an evolutionary bi-product of our caveman-selves. Our less evolved ancestors were probably asking: “How do we avoid the risk to run into a hungry saber tooth tiger…what worked last time…let’s try that again.” Imagine if we created a culture where workers had to say Yes before saying No! How would that change our meetings? Our initiatives? Our risk-taking?

Cultivate a learning culture. A learning culture consists of a community of workers instilled with a “growth mindset,” according to Robert J. Grossman’s article, A Culture of Learning, in HR magazine. In order to create that culture that focuses on learning rather than not failing, an organization must: secure top leadership buy-in

A learning culture tolerates and even encourages mistakes as long as they support learning and growth.
Obviously, risk-taking has to be done with finesse and a good understanding of the business and the market. A good manager or coach is constantly working with their Millennials to understand not only the work or tasks for the day, but also the implications and the larger business strategy. Let them know that the organization they work for would never exist if it were not for someone taking a risk. Continue with the Belief/Behavior Conversation as a way to understand their fear and worry and provide support to allow them to take some greater risks.

About the Author
Matthew Harrington

Matthew Harrington is an author, trainer, and consultant with New Directions, an innovative leadership firm located in Vermont. Matthew is seen as a subject matter expert on social media, social learning, the Millennial generation, and new forms of leadership within the workplace. His recent book, Survival of the Hive: 7 Leadership Lessons from a Beehive, provides a working illustration of cultural complexity, leadership clarity, and the importance of trust as a foundation for excellence. The fun and reflective book provides leadership lessons from the macro- and micro-responsibilities of a queen bee and her relationship to a hive.