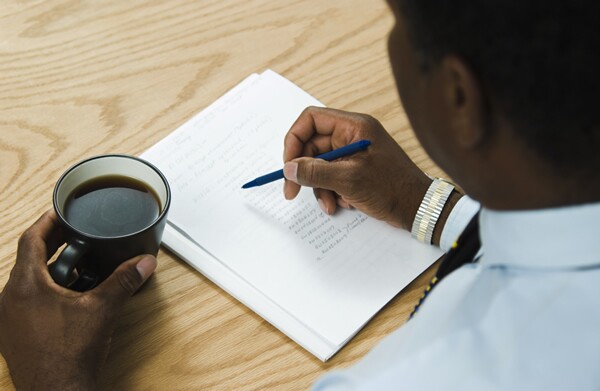 Suppose we attend a workshop on writing realistic dialogue, because writing good dialogue helps us write good scenarios and stories. The instructor, Joelle, is a novelist and has written screenplays. She starts the class by displaying the following on the screen:

“I’m unhappy with the product I received,” said the caller.

“Did you read the manual?” the salesman asked mockingly.

The caller responded, this time a bit louder, “It’s defective.”

The salesman repeated scornfully, “You should read the manual.”

The caller hung up.

Joelle asks us what we think of the dialogue as an example of a poor customer service interaction. We discuss the problems with it: It doesn’t sound like real people or a real interaction, we don’t know what is really happening in this situation or why, and because the dialogue is strange and unrealistic, we find it hard to engage with the situation.

Next, Joelle hands out a worked example (Figure 1) showing the steps for writing better dialogue along with an example written by an expert (Joelle). Everyone reads the example on their own.

Step 1. What is the purpose of this dialogue?

The purpose of this dialogue is to supply a situation to use in a discussion of customer service. It should show how upset or frustrated customers can simply disappear and you will never know why they left. It should show a problem in which the service rep doesn’t care enough to find out what the caller’s real problem is.

Step 2: What kinds of language and emotion should we include in this situation to mirror real life?

Step 3: What are the specifics of the situation (context)?

The customer has a problem with a technology purchase made online and calls to get help. She doesn’t know much about the technology and is frustrated that she spent money and the purchase doesn’t seem to work. She doesn’t really know how to explain the situation. The person who answers the phone acts like she is stupid and keeps repeating the same solution. The noise in the background doesn’t seem businesslike, adding to the customer’s confusion.

Marta felt frustrated that the tablet she ordered didn’t turn on. She called the 800 number on the box. When the service rep answered, she said, “I just got your tablet. It don’t work.”

Joe, the service rep, replied, “What?”

Joe cut her off again. “The manual tells you the steps. The first couple pages.” She heard laughter on the other end. It sounded like there was a party going on.

Marta replied, “I don’t understand.” She continued to hear party noises. After about 10 seconds of not hearing anything but laughter on the other end, she hung up the phone.

Step 5: Read the dialogue aloud. Does it sound like a real conversation? Change anything that sounds forced or unrealistic.

Step 6: Place the dialogue where it belongs and see if it works as needed. If not, rework the steps.

After analyzing and discussing three worked examples of dialogue in three different types of situations (customer service, mom and daughter, and a boss and subordinate), Joelle asks us to come up with principles for writing good realistic dialogue. We come up with the following:

Realistic written dialogue rarely includes formal speech, monologues, every person talking in a similar way, and adverbs such as mockingly, loudly, and scornfully.
We each write dialogue for a situation we are now working on. We share the dialogue with someone else and edit each other’s dialogues, using the principles we devised. By the end of the workshop, we have analyzed a variety of dialogue worked examples, built and edited dialogues, and received plenty of feedback. Some dialogues are critiqued by the entire class and instructor.

Last month’s post, I discussed how worked examples (sometimes called worked-out examples) make it easier for people who are new to a complex task learn it more easily, remember more, have more confidence, and transfer what they learn to new situations. The example we just discussed shows how this works in a specific situation. One of the primary reasons worked examples are helpful is that they reduce the mental effort (cognitive load) of thinking through how to do a complex task when you are new to it.

I called this borrowing an “expert’s thinking.” Worked examples can also help people see what is most important for solutions to this type of problem so they can more readily solve the same kind of problem in the future. This is why Joelle had her class work out a set of principles for building good dialogue from the different worked examples she supplied.

Last month I described five typical steps used for building a worked example, and we discussed the first three:

1. Decide if worked examples will work for your situation.

2. Show how an expert tackles this problem or issue.

4. Check to make sure the underlying principles are understood (so people can apply the example).

5. Build practice to apply the worked example to other situations.

One of the most critical things learning facilitators must build into instruction is checking for understanding. Many trainers ask, “Everyone got this?” Or they say, “Does this make sense?” But it takes a great deal of mental effort to pull together an articulate question and then ask it. When we ask for questions, we need to give enough time for people to collect their thoughts.

One good method includes asking participants to write down the muddy points in the last section (you can ask them to use index cards, email, or a text box of a form and then collect them). Another great method is to ask people to put what they just heard in their own words. Research tells us this method helps people form schema in long-term memory, which is important for remembering.

Joelle repeatedly checked for understanding by asking questions (How could we make this more realistic? Does this dialogue have enough context?), and facilitating while participants:

Checking for understanding in between analysis, critique, and practice was the primary design of her dialogue class.

Practice in Joelle’s class included analysis, critique, and development of dialogue. Participants used her worked examples by analyzing what made the examples good (the principles). They could then use those principles to develop their own dialogue.

How can you apply worked examples in your own training? Feel free to answer and ask questions in the comments section. I’m looking forward to learning from your examples!

The big idea: Worked examples free people who are learning a complex task or problem-solving method from having to figure out or discover it on their own. This saves time and complex mental effort, and improves confidence. It helps people gain expertise more quickly by learning from the expertise of others.