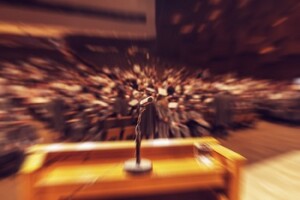 As professional trainers and facilitators, we’ve all been through basic public speaking courses that helped us get where we are today. These courses stressed the need for fundamentals, such as having a good structure, designing learning outcomes or take-aways, and keeping the audience engaged. Yet when we speak with fellow facilitators, it’s amazing to learn most still get some form of anxiety or stage fright in front of the room.

During the process of public speaking, facilitators not only have to manage their engagement with the audience, but they also have to manage the relationship they have to themselves. Everything from "What do I eat before the talk?" to “Am I remembering to breathe?" to "What am I feeling as I present this material, and does it matter?" When we break down all the aspects of being an effective public speaker, we discover it’s not only how one delivers, but also how one is treating themselves in the process.

We’ve seen speakers who haven’t been congruent. Their message was rich, engaging, and educational, but the speaker seemed uncomfortable, trying too hard, or being too content-focused. We know we enjoy a speech when we see it delivered well—when the speaker is authentic, at ease, and relational. TED Talks are famous for offering congruent speakers on their stage.

The challenge is how to arrive at this congruency. Lee Glickstein, a former stand-up comedian, had paralyzing stage fright. Can you imagine wanting so much to share one’s humor but, at the same time, being so frightened of being on stage? Glickstein made it his goal to figure out how he could be himself, be at ease, and deliver material enjoyed by the audience.

Glickstein writes in a 2017 article for Speaking Circles, “I came into my mastery (of public speaking) as the result of a creative workaround for a genetic neuro-atypicality, a variety of what used to be called Asperger Syndrome, now referred to as ‘being on the autism spectrum’. By necessity, I've devised a workaround using my expanded intuitive powers to teach myself how to simulate attunement with others. By some serendipity, I have been able to use this capacity to solve stage fright for myself and for legions of others. And—hallelujah!—my decades of ‘simulation’ have actually expanded my capacity to feel into situations and attune to others."

He worked with a variety of experts and discovered the two key ingredients he had overlooked. The first was to consciously breathe in oxygen, and the second was to be available for eye contact in a way where he could “find a home in people’s eyes.” The difference these two behaviors had on his ability to engage with groups authentically was life-changing. In fact, he enjoyed the changes in himself so much, he offered his findings in a book titled,Be Heard Now!, where he coins this process as “relational presence.”

The two ingredients helping our relationship to ourselves (full breath and a different kind of eye contact) seem like simple actions. After all, if we didn’t breathe, we wouldn’t find ourselves up in front of the room! But these ingredients allow the facilitator who consciously remembers them to come from a deeper sense of connection.

Glickstein learned the mastery of taking full breaths when he noticed his emotions running high. Vago and Silbersweig explain in an article for Frontiers in Human Neuroscience that such breaths help the speaker to come back to a sense of being more emotionally centered and also give the audience time to “catch up,” absorbing what is being said. In addition, speakers’ attention to their perception of fuller breathing brings awareness to physical and visceral sensations, which helps to ground them in the present moment with conscious awareness.

A focus on breathing is a core of many meditation practices to build a calm and focused mind, yet how many times do individuals remember to take a few deep breaths as they try to convince another? Breathing practices can also directly modulate the nervous system as one calms the reptilian brain. For example, research detailed by Lehrer, Vaschillo, and Vaschillo in Appl Psychophysiol Biofeedback. has shown that having a longer outbreath than in-breath tends to activate the parasympathetic nervous system and deactivates the sympathetic (fight or flight) response, helping to calm people down. This practice may make people feel not only calmer, but more able to engage relationally with their companions or audience, explains S.W. Porges in the article, “Social Engagement and Attachment: A Phylogenetic Perspective.”

The specific kind of eye contact Glickstein uses, soft eye gaze, is the practice of experiencing connection with one’s audience through a neutral gaze of positive regard without agenda, or even a need for words in any given moment. It is the pre-condition for meaningful communication, where a speaker delivers information through this natural connection to their listeners rather than talking “at” an audience that feels separate. Another key aspect to this eye gaze is for the speaker to choose an audience member to convey this positive regard, “one listener at a time”. In other words, one's eyes are not sweeping the room, but rather softly focusing always and only with one person at a time. So the audience is seen by the speaker and in turn the speaker is seen – one-to-one - a mutual connection, not simply one directional.

There is research to suggest that soft eye gaze releases the social bonding hormone oxytocin, which may well explain the increased sense of safety and trust that audiences report feeling when experiencing it. Other research by Dr. Stephen Porges suggests that extended non-threatening eye contact activates the Social Engagement System, which also acts as a brake on the normal fight-or-flight response, slows the heart rate, thereby creating a sense of safety.

So the next time you step in front of the room, remember you have the opportunity to both connect to the audience and connect with yourself. Through conscious breath and intentional soft eye gaze with another you can discover the path of being relationally present—ultimately, more fearless, more connected, better heard and remembered.

About the Author
Tina Mertel

Tina Mertel has spent her 20+ year career in leading workshops and coaching individuals to improved performance. Her areas of focus include communication skills, teambuilding, leadership, presentation skills, time management, emotional intelligence, creativity, goal setting, conflict management, stress management, wellness, and influence. Common in each workshop is a focus on skill building that incorporates a company’s culture and real life situations. She works with corporate, governmental and non-profit organizations, and runs public workshops in relational presence in New York and San Diego. She has authored several publications including journal articles, and Meaningful Coaching, a book based on the idea that knowing your values as a coach, and the values of your client, assist in making the coaching interaction more meaningful for your client. Based in New York City, she has her M.A. in Human Behavior, B.S. in Business Administration, and is a PCC level coach with the International Coach Federation. You can follow Tina on LinkedIn or visit her website at www.meaningfulcoaching.com.

About the Author
Lynne Velling

Lynne Velling, principal of Velling & Associates Communication Training, has made the communications field her career.  A trained actress and communication trainer, she has helped many professionals find their authentic, effective and confident voices in the world. Her background includes marketing and public relations in the public and private sectors, director of an international English language Center, and instructor of adult English as a Second Language (ESL) students and clients. Lynne has also created and conducted training programs in Customer Service. An award-winning Toastmaster, she was a district Public Relations Officer among other leadership positions developing and conducting training workshops.  She conducts relational presence and communication workshops in Southern California and is a co-author of "Finding Your Own Voice" in  Inspiration to  Realization, Strategies for Success, Vol. II.  She holds degrees in Natural Theology and Sacred Healing, Theatre and Teaching English as a Second Language (TESOL). You can follow Lynne on LinkedIn, Twitter, or visit her website at www.vellingcommtraining.com.