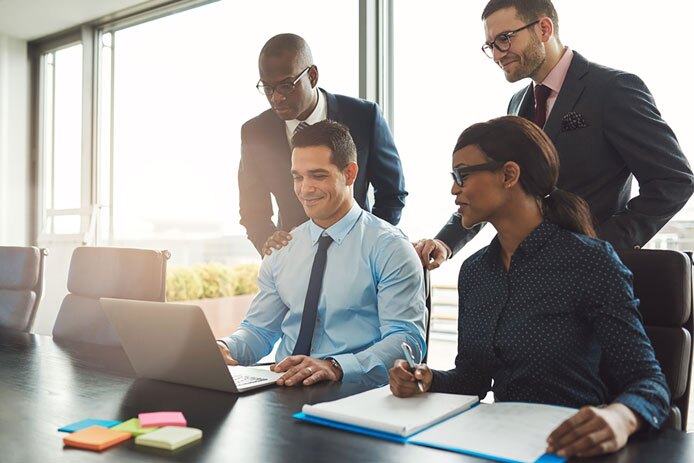 Google the term business speak and the first result is an article titled “The Most Annoying, Pretentious, and Useless Business Jargon.” Scrolling further quickly confirms this article isn’t an outlier. To the surprise of no one, business speak does not have the best reputation.

And yet, you undoubtedly use business speak, maybe without even realizing it. These terms permeate every aspect of work. They are often overused and vague, and they can trigger confusion and annoyance. However, when used appropriately, jargon—and to some extent even clichés and buzzwords—can convey a tremendous amount of information in bite-sized containers. Personally, I’ll never forget the first time someone told me to avoid “eating crow.” It was a tremendous learning experience packaged into one phrase.

Deciding whether business speak is pretentious or annoying isn’t the point of this blog. The point is that these terms and expressions can have value when they are used thoughtfully. In this blog series, we’ll examine stuff business people say to uncover its hidden value—if it exists—and to expose the terms that don’t. As a result, hopefully we’ll all communicate just a little better.

Merriam-Webster and host of other dictionaries assure us that synergy and its verb form, synergize, are perfectly fine words. Synergy, formed from the Greek words for “working together,” means the cooperation or interaction of two or more things to produce a beneficial result.

Synergy and synergize have clearly made their way into the lexicon of American business. But if you, like us, sense that the terms are trendy and overused, we have some data to back you up.

According to the Collins Dictionary, synergy was among the least used English words until the 1970s, when its popularity began to climb. Today it’s one of the 30,000 most commonly used words in the vast vocabulary of English. We could argue that synergy got its biggest boost in 1989 with publication of Stephen Covey’s The Seven Habits of Highly Effective People, in which habit number 6 is "Synergize." Prior to that, synergize was most often used in pharmacology, to describe two or more drugs that work together to amplify efficacy.

Keep It or Lose It?

Lynn: This is a hard one for me. Synergy has a specific definition and it can be useful and concise in the right situations. I have more trouble with synergize because it’s the product of the habit we English speakers have of verbing—converting nouns to verbs. It’s not wrong, but it seems a bit linguistically lazy.

Overall, though, I think the two words are overused and misused to the point that the user’s real intent sometimes gets muddled. The user can also sound ridiculously pretentious. To illustrate both problems, consider the vacuous phrase, “Let’s synergize.”

I’m a big fan of saying exactly what you mean. For example, if you mean “Let’s work together,” say so—avoid the wordy and ambiguous “Perhaps we could consider synergizing.” Or if you think your idea produces economies of scale, say that instead of saying it “provides an opportunity to realize synergies.” On the other hand, if you are referring to the beneficial results of cooperation, then by all means use the word synergy.

So I say, keep synergy but use in moderation, and lose synergize.

Rick: After college, as a joke, I was given a copy of the book Faking It: How to Seem Like a Better Person Without Actually Improving Yourself. It’s a funny read, and the word synergy is specifically highlighted. The argument is if you want to seem smart without having any real knowledge, synergy is your go-to term. The book might be silly, but now whenever I hear synergy a little alarm bell goes off in my head.

In my opinion, synergy just doesn’t translate well from definition to application. This is classic business speak: force-fitting a term into situations where simpler language would convey your message better. The worst part, for me, is synergy’s vagueness. It invites a cloud of mysticism into what should be a straightforward concept, and creates obscurity (purposefully or not).

Despite being a big fan of Stephen Covey, I’m going to take a hard line on this word and say lose it. There is almost always a better way to say what you mean.

So there you have it: one on the side of keeping it, and one rooting to lose it. What do you think? We’d love to hear.

About the Author
Rick Rittmaster

About the Author
Lynn Moline

Lynn Moline is the owner of Lynn Moline Associates, Inc., a Minneapolis-based OD and leadership development consultancy. In practice for 23 years, Lynn has trained and coached thousands of leaders from scores of industries and has guided dozens of executive teams through planning and organizational renewal. She holds an MBA and many credentials and certifications for training, facilitation, and coaching. Lynn hopes to leave as her legacy at least a few people whom someone thinks are the best bosses they ever had.