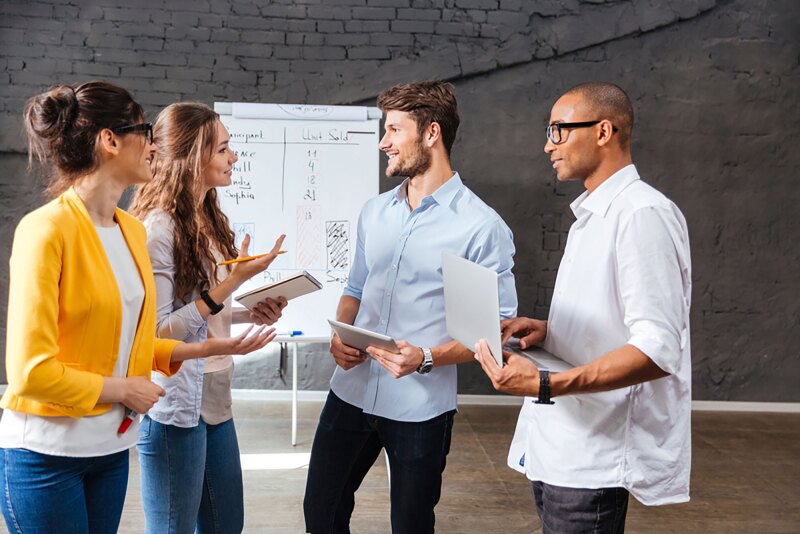 Corporate jargon, clichés, and buzzwords can impact how we work together in ways we can’t anticipate. In this blog series, we examine the stuff business people say to uncover any hidden value and expose the terms that don’t work. Our last post explored the term synergy. Now, let’s look at bandwidth.

“Frankly, Rick, I don’t think I have the bandwidth to write this article.”

“Ok, so you don’t have time this month.”

“No, actually, I have the time. I just don’t have the, you know, the bandwidth.”

“You mean the mental ability? But you love words and you know how to write, Lynn. I don’t get it.”

“Rick, of course I know how to do it. But right now I just don’t have the bandwidth! I’m too psychologically worn out from my day job to think about this.”

And so we see the issue when a word appropriated from one field is pressed into service in another. Someone invents a clever, novel way to use a word. Others like the ring of it, so they adopt the word for their own purposes. Use of the word spreads, and given enough time, it morphs into a shapeshifter with several meanings—none of which can be clearly discerned from the context.

That’s the problem when business people use a trendy word like bandwidth. It’s not clear just what the user means.

A Bit of History

Bandwidth entered scientific lexicon at the beginning of the 20th century when scientists experimenting with radio communication needed to describe segments of frequencies on the electromagnetic spectrum. The frequency segments looked like bands of varying widths, and the term bandwidth was coined.

But that’s not where it ended. Our current fascination with this scientific term is the second time in the last century that it’s been appropriated. According to an article in Quora, the next inventive use came when telephone and cable lines began to be used for the internet. The lines had limited capacity for the amount of data they could carry simultaneously, and someone began calling that capacity bandwidth. Of course, the capacity to carry data has nothing to do with bands, but the usage stuck.

Today, the Mirriam Webster Dictionary shows three definitions. The first refers to electromagnetic wave, the second to data transfer as previously mentioned, and the third is “the emotional or mental capacity necessary to do or consider something.”

Keep It or Lose It?

Lynn: For casual conversation when the context makes the meaning clear or when the exact meaning isn’t so important, go ahead and indulge. But for business, lose it. It’s too imprecise, especially when the message matters.

In my consulting practice, I sometimes help clients uncover the cause of unexpected and undesired outcomes. If someone tells me the project missed a milestone because they didn’t have the bandwidth, we first have to figure out what they mean because the solution to “not enough time” is very different from the solution to “we don’t know how to do it” or “nobody really bought in to begin with.”

English offers us a thesaurus full of other words that mean exactly what we want to communicate. Think of the possibilities instead of bandwidth: ability, aptitude, attention span, capability, capacity, competence, drive, energy, enthusiasm, intellect, interest, time, willpower. You get the idea.

Rick: If you want to say something without really saying anything, bandwidth is your word. This term has it all—it’s commonly accepted and it sounds technical and specific, but doesn’t actually communicate any actionable information. It does, however, externalize limitations and mitigate the responsibility of the person using the word. “We can’t do that—we don’t have the bandwidth to complete the assignment.”

I work in an engineering-focused organization with many technically minded individuals. There is high value on being precise, as it relates to language—and especially technical language. I’d expect there to be a stigma associated with using bandwidth incorrectly, but I don’t see it. I might be an unaware simpleton in the presence of great technical minds, but I don’t get the sense that using bandwidth (as jargon) creates any angst for my colleagues.

Because bandwidth is so commonly accepted and does directionally guide conversation, I’m going to vote to keep it. There seems to be some value in positioning the term as a general way to express constraints. However, the important disclaimer is that the speaker must provide some context or specifics regarding the constraints, and the listener shouldn’t allow the speaker to get away with using bandwidth as an excuse.

So there you have it: one keep it, and one lose it. What do you think? We’d love to hear.

About the Author
Rick Rittmaster

About the Author
Lynn Moline

Lynn Moline is the owner of Lynn Moline Associates, Inc., a Minneapolis-based OD and leadership development consultancy. In practice for 23 years, Lynn has trained and coached thousands of leaders from scores of industries and has guided dozens of executive teams through planning and organizational renewal. She holds an MBA and many credentials and certifications for training, facilitation, and coaching. Lynn hopes to leave as her legacy at least a few people whom someone thinks are the best bosses they ever had.