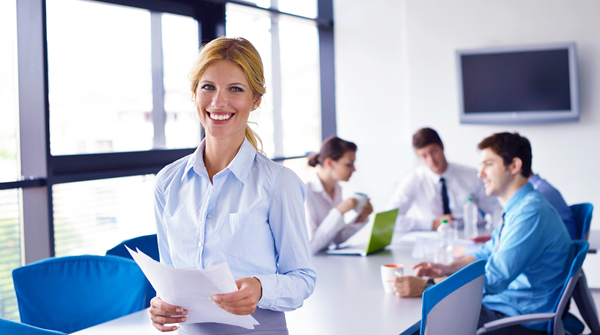 The Power of Having a Team of Leaders

For 20 years, Stewart Liff rode the subway to work in New York City. Every day, while he was sitting in a subway car, there would be two people standing in front of him discussing their work situations. While the two people, job roles, and companies would differ each day, the conversations were generally the same.

They would constantly complain to each other about the way they were treated by their managers. They moaned and groaned about a lack of communication, something their boss said or did not say to them, disparate treatment, a perceived lack of opportunities, and so on. To a large extent, it didn’t seem to matter what they were complaining about, because the core issue always seemed to be their relationship with their boss.

Authors Marcus Buckingham and Curt Coffman write in their book, First Break All the Rules: What The Worlds’ Greatest Managers Do Differently, “that people don’t leave jobs, they leave managers. If employees don’t get along with their managers, don’t like them or don’t respect them, they will leave a company despite a high salary or great benefits. A bad manager is a big factor in employee performance. A good manager, no matter the salary, will inspire loyalty.”

Likewise, in a recent Engagement Study commissioned by Randstad, 53 percent of the employees felt that they could do a better job than their manager.

According to Leigh Branham, in The 7 Hidden Reasons Employees Leave, the results of 19,000 exit interviews conducted by the Saratoga Institute indicate that the top reasons employees cite when leaving a job is either disagreement with or disapproval of their immediate supervisor. A natural conclusion to draw from this and other highly consistent data is that the way supervisors deal with their employees is what most drives morale, retention and more importantly performance.

Joel Garfinkle, in his Talent Management article “Why Employees Leave Their Managers,” listed five of the most common mistakes managers make when dealing with their teams:

Others also have identified different mistakes to avoid, but most of them come down to the same basic conclusion: the best way approach to address this huge problem is to change the way that people manage. This has resulted in millions if not billions of dollars being spent on training and in many cases retraining supervisors around the world.
A different management model

Given the fact that the organizations have been struggling to address this issue for decades, without the success they crave, perhaps training is not the only answer. Maybe it is time to take a fresh approach to way that work is conducted. What if you could create a team of leaders where everyone in the team took a leadership role and there was no real need for a manager, other than in an advisory capacity?

The idea here is that organizations with the traditional top-down, manager-to-employee work structure, struggle with the inherent nature of this design. From the managers’s perspective, there is pressure to perform, frequent demands on their time, problem employees to address and unions to deal with. Moreover, they are required to make all of the key decisions and the weight of the world seemingly rests on their shoulders.

From the employees’ point of view, they face stringent performance demands, often feel like they are a cog in the wheel and replaceable, are expected to do what they are told, and have little autonomy, authority or room to be creative. Their satisfaction often depends on less-than-effective supervisors resulting in most of them not being fully engaged.

Below is an illustration of what a typical work unit looks like, which we refer to as a Stage 1 Team. 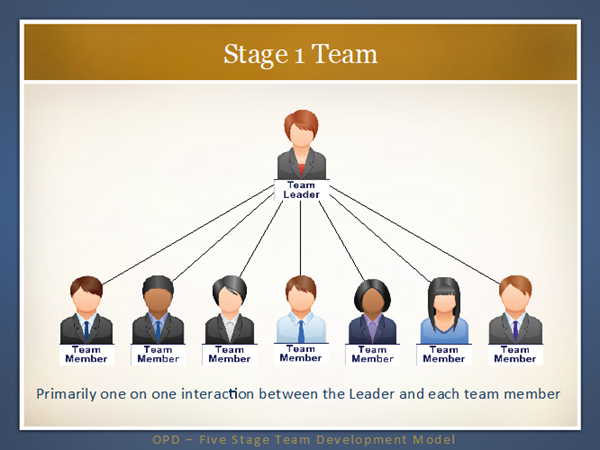 With a team of leaders, knowledge is spread throughout the team, which does all of the planning, scheduling, performance management and accountability, including dealing with problem employees. Meanwhile, the supervisor moves on to focus on higher-level activities, although he still remains available as an advisor to the team.

This takes away the traditional argument that the supervisor is to blame for the employees’ problems at work. Instead it shifts the responsibility and decision-making to each team member, resulting in everyone become more engaged, involved and motivated. As a result, the main issue is no longer, “what did management do or not do to me?” Instead, it becomes, “how can we deliver outstanding performance?”

Below is a depiction of a team leaders; in other words, a team that is at Stage 5 and manages itself. 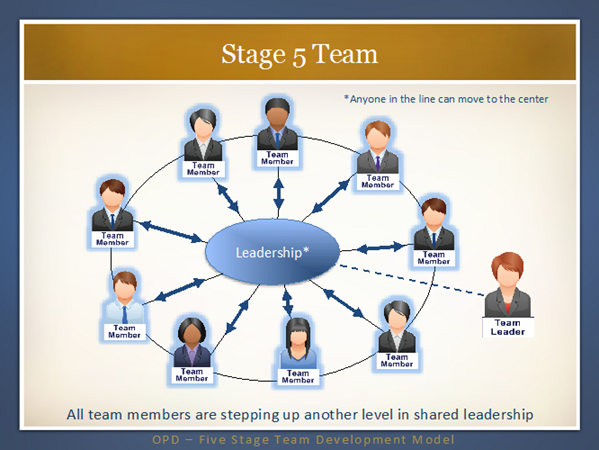 As you can see, this is a very different model than the one that has been used for thousands of years. The team no longer has a supervisor at the top that makes all of the key decisions, while the employees are merely workers who follow his lead.

Instead, it is a true team that revolves around all of its members and one in which everyone takes ownership and accountability for its results. This model, which other organizations have successfully adopted, can provide you with energy, capability and results that all strive for but few achieve.

Obviously, transitioning to teams of leaders is not an easy thing to do. Otherwise, everyone would do it. It requires expertise, careful planning and appropriate tools, as well as time, energy, and some patience to make such a shift. However, for organizations that want to reinvent themselves and move to this approach, the payoff can be quite significant.

One company found that when their employees began working together in teams of leaders, amazing things began to happen. They quickly saw that people are much better at reducing waste when they work as a team rather than as individuals. They began to meet as a group, shared ideas, exchanged best practices and identified the paths that were not worth pursuing.

As they developed as a team, they began to focus on analyzing their business processes. They categorized the work accordingly and where necessary, made adjustments along the way. During their analyses, they discovered that the best way to reduce expenditures was during those steps in the process when something was handed off.

Over a five year period, the teams saved this company about $500 million, with savings of $100-$150 million for the first few years. In addition, the systemic changes identified during their reviews provided them with a distinct advantage over the competition. Finally, by taking such an approach, the employees became much more engaged, committed and knowledgeable about their work, while becoming a team of leaders. The organization got these results because they got exactly what they designed.

Creating a team of leaders

The principle we use in creating a team of leaders is that teams are “perfectly designed to get the results that they get.” That means that to create a team of leaders, everything must be designed with this end in mind. The best way to do this is to take the following steps: 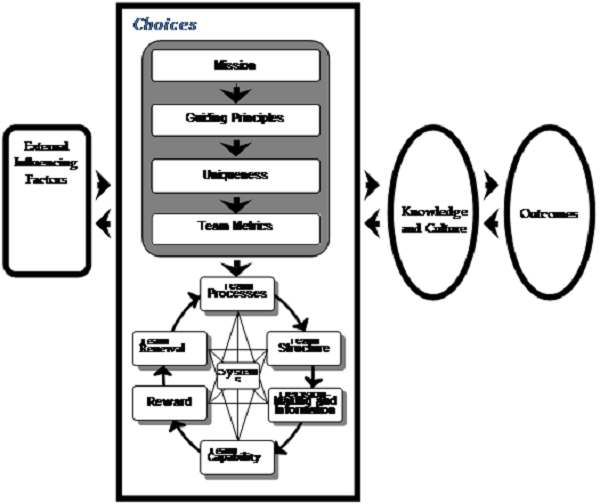 Having a team of leaders can provide your organization with an enormous competitive advantage. You will get this by having a culture whereby each team member/leader uses her full potential and collectively they leverage the creativity and desire that everyone has to make a difference in the workplace and with their customers and partners.  Members of these teams of leaders have a great sense of meaning in what and why they do what they do and that translates into results. Perhaps it is time for you to consider such an approach.

This post is based on the forthcoming book, A Team of Leaders: Empowering Every Member to Take Ownership, Demonstrate Initiative, and Deliver Results, AMACOM Books, March 2014.

About the Author
Stewart Liff

Stewart Liff is an HRM, visual performance management, and team development expert. He is the president and CEO of Stewart Liff & Associates, Inc. and author or co-author of seven books, including Managing Government Employees and A Team of Leaders. He can be reached at [email protected]

About the Author
Paul Gustavson

Paul Gustavson is a former chair of the Marriott School of Management's OB/HR Advisory Board and founder of OPD, which helps organizations around the world create and sustain high-performance teams.