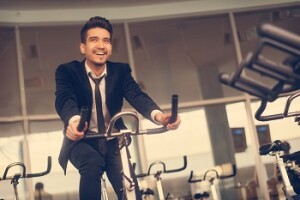 The NBA MVP Award denotes the player who was most valuable to his team among ALL the players in the NBA that season. Russell Westbrook won the MVP award this past season, becoming only the second player in history to average a triple double (at least 10 points/rebounds/assists per game) for the entire season. Though his Oklahoma City team made the playoffs, they were easily dispatched in the first round by the Houston Rockets. Similarly, other past MVPs—like Stephen Curry, LeBron James, and Kobe Bryant—have not won championships in their MVP seasons, but they have lead their teams to at least the semifinals or quarterfinals that year.

You've heard it in sports: One player cannot do it all.

This is not a knock on Westbrook. It just shows that, no matter how great any one person is, on winning teams, everyone must contribute when it counts. Business works the same way. Business happens only when there is an exchange of resources between people. And the more people you can get working with you to make these exchanges, the more smooth and robust your business.

Here’s how you can prepare your work team to win the same way a championship sports team prepares to compete for championships.

When I was recruited to Penn State Altoona in the summer of 2001, Head Coach Kenny Mackling told me upfront that his purpose for holding practices was to make all players as uncomfortable as possible. We did drills that purposely had players at numbers disadvantages.

For example, the player who was running first in a drill would have his speed used against him; Coach Macklin would blow his whistle and the drill was done in reverse. If that description confuses you, just imagine a race where, while it’s going on, the finish line is switched with the starting line—the person in last place is now in the lead, and the leader is now in last place. The desired outcome was to have us ready for unfair stuff—like bad referee calls, shots not falling in our favor—in the live games and not get rattled.

You can do the same for your teams in the workplace. Occasionally change the rules on your people mid-task and throw wrenches in their plans that require them to regroup, redouble efforts, and mentally toughen up.

Bench the Star Player and Find Out What You Have

When Michael Jordan was playing for the Chicago Bulls in the 1990s, Coach Phil Jackson would, sometimes unsuccessfully, ban Jordan from participating in Bulls practice. The goal was to let the other Bulls players, who were used to following Jordan’s lead, step up and lead on their own.

Jackson figured that there would be a time when Jordan needed a rest on the bench, would go cold during a game, or maybe even miss a game. Would the other Bulls be ready to play and step up when needed?

The Bulls won six championships in the 1990s. Though Jordan was his usual dominant self, there were stretches of big games (and a few title-clenching shots) where someone other than Michael Jordan made the big play. We can agree that Jackson’s strategy worked.

Ask Yourself What Your Enemies Would Do

Dallas Mavericks owner and Shark Tank star Mark Cuban has been known to say he asks himself how his toughest competitors would try to cut Cuban out of business. Then, Cuban says, he goes to work plugging those gaps.

No team in sport or in business is unbeatable. Look for the weaknesses—and the opportunities for exploitation—that your competition or opponents could see in you. Make your team aware of such weaknesses and get them invested in closing them up.

Business teams are always under siege. And different from sports teams, you don't always know who your opponents are. So focus on what you can do to strengthen your own forces from within, before an opponent makes themselves known.

About the Author
Dre Baldwin

Dre Baldwin is founder of DreAllDay.com. A 9-year professional basketball player, Dre teaches mental toughness, self-confidence and self-discipline to athletes, entrepreneurs and business professionals. Dre has worked with Nike, Finish Line, Wendy's, Gatorade, Buick, Wilson Sports, and DIME magazine. Dre has been blogging since 2005 and started publishing to YouTube in 2006. He has over 5,000 videos published, with daily content going out to his 115,000+ subscribers and being viewed over 35 million times. He has given three TED Talks, published seven books, and has a daily podcast, Work On Your Game with DreAllDay.