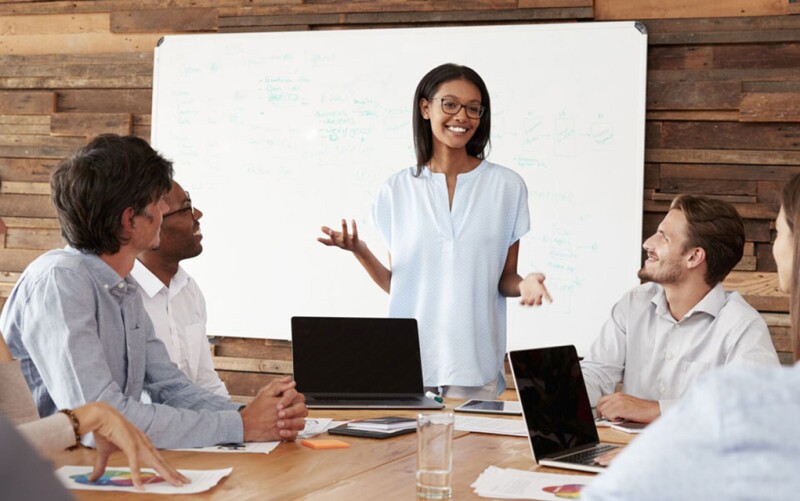 Yet in many organizations, traditional directive leadership has been predominant, and their leaders do not necessarily have the skills to lead collaboratively. Worse, in the face of crisis brought on by the COVID-19 pandemic, intensifying what was already a volatile, uncertain, and complex world, those leaders tend to double-down on being directive. And, as we’ve seen on the global stage in this crisis, non-collaborative top-down control just doesn’t cut it.

Through my in-depth research at the University of Pennsylvania and behavioral analysis of highly successful collaborative leaders over the last 20 years, I have identified key characteristics that those leaders have in common. They are: inclusive, culturally adaptive, empathetic, and nurturing. In order to learn and demonstrate these characteristics, leaders must cultivate one key foundational trait: a self-awareness that allows them to understand their impact on others.

This is achieved by tempering ego and/or balancing assertiveness. In side-stepping ego, collaborative leaders are able to focus on others and go beyond their own self-interest. Because they don’t strive to prove themselves or look for affirmation, they are capable of being vulnerable. They admit that they don’t have all the answers, and in doing so, they become more approachable and relate-able.

Collaborative leaders balance assertiveness with humor, empathy, and interpersonal agility. By monitoring their effect on others and calibrating their self-presentation to assure everyone is comfortable, they are seen as welcoming. In turn, people feel connected to them.

When leaders re-center their attention from themselves to their teams, it enables them to demonstrate the several critical behaviors of collaborative leadership, outlined below.

Collaborative leaders distribute power among team members, which grows trust and increases team performance. Such leaders cultivate shared accountability, so team goals are a mutual imperative. Further, they communicate in the moment, thoroughly and broadly.

An example of this is “Patrick,” a manufacturing business unit president who has a knack for rescuing failing teams. Regarding one particular turnaround, he said, “I saw people working against each other. It was siloed; everybody was out for themselves. There was a lot of backstabbing going on. I made sure that there was clarity around each and everybody’s roles contributing to the greater win. And then we built a cadence. We literally rebuilt the team with an aggressive look at turning the business around.”

Patrick facilitated regularly scheduled group meetings from day one to ensure everyone was on the same page and privy to all critical information. His “cadence” was an interdependency among the team members, so they were working together and not at cross-purposes. He set his ego aside, and in doing so, tamed the egos of individuals in the team and diffused the corrosive power struggle.

By sharing power and information, collaborative leaders lay the groundwork so that teams can successfully engage in working out problems and making decisions. This builds a collective orientation, cohesion, and trust that enables effective teamwork. Being inclusive allows leaders to coalesce multiple sources of expertise and perspectives throughout the process of assessment, problem solving, and decision making.

“Lauren,” a CFO of a Fortune 50 company, told me about involving her group in the process of addressing a significant issue. “I hit them with a splash of cold water by telling them that the bottom line says we’re going to lose ten million dollars this year. Once I had everyone’s attention, I told them that I didn’t have the answer for reversing this, but that I wanted to work with them to find it.” She assembled a team, some of whom were direct reports, some a level lower, and some from outside her part of the organization. Her willingness to be vulnerable and trust them meant the team developed trust for her and one another. They set up a project war room and, over an eight-week period, identified the contributing issues and obstacles to action, worked out potential solutions, and made a decision for moving forward.

Showing empathy, listening, and respecting all
Collaborative leaders relate to the emotions of others. They wholeheartedly listen to their people and value what they have to say and contribute. In doing so, they communicate , “I care,” “I’m interested,” and “I understand,” thereby engendering connections and solidifying teams.

“Kevin” a senior vice president in a multi-entity healthcare organization, had the “enviable” job of implementing a change that would ultimately streamline the system but cause some short-term disruption. He used his ability to listen and convey emotional empathy as he worked with physician leaders to consolidate obstetrics services. He told me about a critical meeting, “I realized I had to let them express their feelings. So, I called them out. I said, ‘Okay, look, you brought five doctors with you thinking you’re going to be delivering babies here forever, that’s going to be tough to change those expectations. So, let’s talk through that.’” By helping the physicians clarify their feelings and sharing his own emotions, Kevin solidified the team’s trust.

Uncertainty and volatility will be with us for the foreseeable future. The pressure is on for leaders to hone their collaborative skills, and by doing so, facilitate development of those skills in others. By focusing their attention outside themselves, and developing their ability to listen, respect all people, and empathize, they will be well-equipped to inclusively lead the way through these times and the times ahead.

About the Author
Carol Vallone Mitchell

Carol Vallone Mitchell, PhD, is author of Collaboration Code: How Men Lead Culture Change and Nurture Tomorrow’s Leaders and Breaking Through “Bitch”: How Women Can Shatter Stereotypes and Lead Fearlessly. She is cofounder of Talent Strategy Partners, a leadership development firm that helps organizations accelerate business results by identifying and developing their emerging leaders.