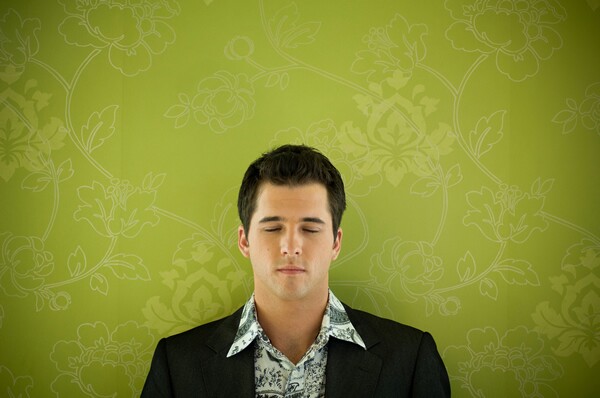 Picture the scene. You are a mid-level manager meeting with one of your more creative employees to discuss a current challenge within your department. It is a basic back-and-forth conversation that describes various parts of the challenge. At the end of the 15-minute session, you feel more confused than ever. And this is the third time you’ve discussed the matter!

One reason communicating an idea or concept is so difficult is that words are subjective. Another reason is that many times our vision for the concept may not be fully fleshed out in our own mind. When we articulate it in bits, it is like giving someone several pieces of a puzzle and then expecting her to see the entire scene. It becomes a guessing game to find the other pieces rather than collaborating and cooperating to build the concept.

As many in the talent development arena have recognized, ongoing communications between managers and employees is critical to creating a culture that is aligned, integrated, and focused on business results. Technology has disrupted how people typically connect, and social media is now a primary source for communications. However, despite these changes, one-to-one and small group sessions are still a critical source for dialogue and deep discussions. This form of communication includes the basics of listening, inquiry with empathy, openness, and feedback.

There are brain-friendly tools and techniques that individuals and small groups can use to create more opportunities for true dialogue, including the use of visuals. The idiom “a picture is worth a thousand words” has been around so long because it is true. A 2014 study led by Mary Potter, researchers at MIT found that the human brain processes visuals that it sees for no more than 13 milliseconds. In Malcolm Gladwell’s book, Blink: The Power of Thinking Without Thinking, he acknowledges this fast processing phenomenon as a flash of inspiration and states: “But there are moments, particularly in times of stress, when haste does not make waste, when our snap judgments and first impressions can offer a much better means of making sense of the world.

Another tool for promoting communications is metaphor. A metaphor describes something by equating it with something else. It is an association between two different things that have an important characteristic in common. Using a metaphor can help you understand something by comparing it with something you already know. Visual metaphors are the patterns of understanding that enable us to share tacit ideas in an explicit manner. All images, sounds, smells, and memories are representations of things in the outside world and not the world itself. We understand what we don’t know by comparing it with what we do or with some model we learn. Additionally, according to Mark Smiciklas in his book The Power of Infographics, some metaphoric icons can also have an emotional connection, such as references to food or animals.

One metaphor used frequently to represent the vastness of a seemingly small issue is the reference to “the tip of the iceberg.” Other often-used metaphors:

Integrating both visuals and metaphors into learning experiences is simple because of the plethora of graphics available on the Internet. However, The Center for Creative Leadership’s Explorer cards can make it even easier for some activities. The cards depict leadership metaphors on colorful postcard size cards. While these cards can be used in a variety of ways between individuals, especially in coaching scenarios, another way to use them is with a small group or team to promote dialogue that builds a collective picture.

One approach is using a pictogram. This is a chart that uses pictures to represent data that convey a concept or idea. By combining the individual visual metaphors and discussing each one, the group can gain insights on themes and patterns, similarities and differences. As a group activity, the pictogram can combine the ideas from individuals to create a larger, more holistic vision.

Here are just a few of the benefits to using the visual metaphor pictogram approach to enhance communications: 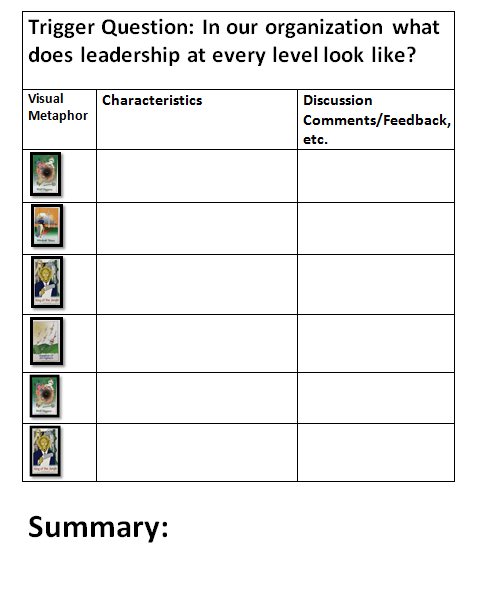 Putting It in Practice

They document what the visual and the metaphor mean, why they selected it, and the characteristics of leadership it represents. In round-robin format, the group members share their card by posting it on the pictogram and discuss their ideas with others using a few words that describe how each picture relates to the trigger question. The group of cards becomes the pictogram. After a discussion of the individual cards and a listing of the characteristics, the group looks at themes, patterns, similarities, and differences.

So, the next time you are trying to solve a major leadership challenge, consider using visual metaphors with a group to build a collective pictogram. From that experience, collectively synthesize the information into a visual metaphor story to share with others.

About the Author
MJ Hall

MJ leads the ATD Forum content arena and serves as the learning subject matter expert for the ATD communities of practice. As the leader of a consortium known as a “skunk works” for connecting, collaborating, and sharing learning, she worked with members to evolve the consortium into a lab environment for advancing the learning practice within the context of work, thus evolving the Forum’s work-learn lab concept. MJ is a skilled and experienced design and performance coach for work teams, as well as a seasoned designer of work-learn experiences with a focus on strategy and program management. She previously held leadership positions at the Defense Acquisition University, including senior instructor, special assistant to the commandant, and director of professional development.