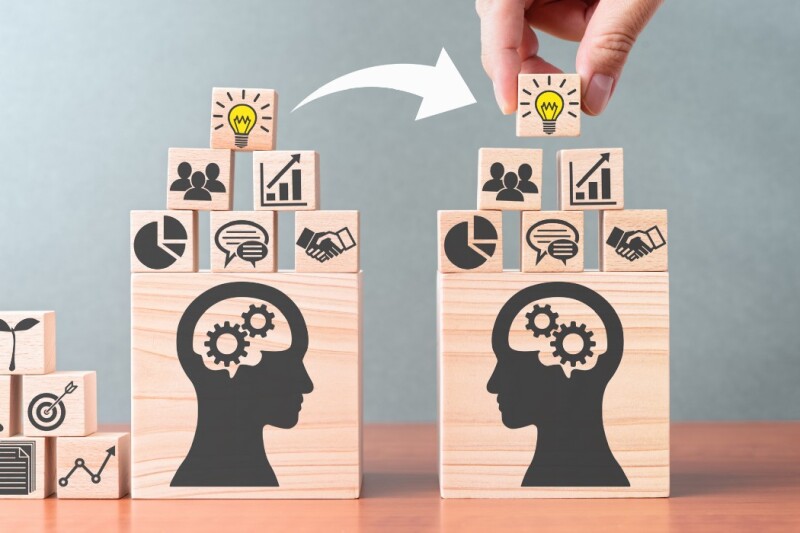 An adage used frequently in the talent space is that It is not just about the learning; it is about the doing. Learning and development leaders and practitioners always look for innovative ways to make training and learning experiences stick to create behavior change that results in enhanced performance capability. One of the foremost thought leaders in the field of learning and neuroscience, Britt Andreatta, recently spoke to the ATD Forum about the updates to her popular book Wired to Grow. Originally published in 2015, so much had changed since the book was released that Andreatta felt a new version was needed rather than just a revised edition.

One of the most important new discoveries Andreatta shared was that humans have nine types of memory. There are two forms of short-term memory, which last no longer than a few minutes, and seven forms of long-term memory, the longest of which can last a lifetime. Each activates different brain structures. She goes into depth about the memory matrix in her Wired to Grow 2.0. Knowing the different types of memory allows the practitioner to determine which learning methods to use when designing learning experiences.

In the new edition of the book, Andreatta expands her Three Phase Model of Learning: Learn, Remember, Do, to include new elements such as priming and psychological safety. She also goes into more depth in each of the phases. 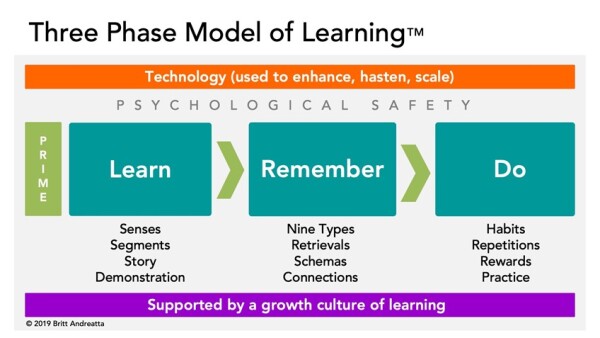 Within the Remember phase, Andreatta suggested strategies for using the new information to create more concrete memories. These include:

Schemas are like file folders in our brains where things are stored. Andreatta suggests using concrete examples or building off ideas your audience already knows to help connect with their existing schemas. An example is while the telephone looks different from what it once did, the basic function of calling someone is a concept almost everyone can relate to. However, be careful to avoid topics that could be painful to participants. For some, using the example of a family could be painful due to a tough childhood or recent loss of a loved one. Activating schemas properly allows the new information to be “hooked” onto something already well anchored in the brain.

Creating new neural pathways takes intentional effort on the part of the learning experience designer but can be done in a number of different ways or combinations of ways, as Andreatta outlined, such as:

Metacognition—Thinking about thinking, asking participants to “remember a time when . . . ” using self-reflection, and appreciative inquiry.

Wordplay—Tapping into the large language center of the brain can be a great way to get your concepts properly hooked. Examples include mnemonic devices and acronyms. Andreatta states that her favorite is FAIL: first attempt in learning.

Music—One of the reasons School House Rock was so effective and songs like “Conjunction Junction” are remembered almost 50 years later is the use of music. Music is unique because it is wired into every region of the brain and has even shown the ability to rebuild injured parts of the brain and memories of people with diseases like Alzheimer’s.

Social—We are social creatures, and shared learning experiences are much more powerful than solitary ones because they activate parts of the brain tied to relationships and cooperation.

Insight or “the aha moment”—When someone experiences the aha moment, they tend to let out an audible “ooooh.” According to a 2018 study by researchers in the United Kingdom and Australia, this aha experience releases a rush of dopamine in the brain. This release is a chemical reward that gives a feeling of excitement, joy, and relief. Together these create a lasting memory for the learner.

A memory begins as an experience that we encode into our brain through our senses. That memory is then stored until we engage in some act of recall or recollection and then it comes back into our conscious awareness.
― Britt Andreatta

Studies show that the best method to boost retention of information is to set up a cadence of at least three retrievals spaced between sleep. Retrievals take on different forms but can be quizzes, flash cards, or sharing with the class on a following day.

Learning practitioners must also be adept at creating learning experiences that enable others to learn, to remember, and to do. After all, we do not want our learners to merely know something; we want them to do something differently because of that information. The success of a learning initiative should be measured by the change in behavior. It is impossible for real behavioral changes to take place without repetition of the learned behavior. According to Andreatta, after 20 repetitions of a new behavior a neural pathway is formed. Between 40 and 50 repetitions, on average, the basal ganglia in the brain turns that behavior into a habit. At 66 repetitions and beyond science can measure an enlargement of the neurons on that pathway, much as physical exertion enlarges muscle tissue.

One final topic covered was the power of VR/XR to boost learning. Science has proven that VR/XR codes in the brain as a lived memory, one that is associated with a real experience, even when the learner knows that it wasn’t real. A training experience in VR/XR tells the brain that this happened as well as allows the learner to get repetitions in a safe environment where this might not have been possible before. Virtual experiences are especially effective for geospatial learning—relationship skills that require empathy or sensitivity and embody the learning of a physical task. Andreatta encouraged learning practitioners to develop their strategy for incorporating VR/XR sooner rather than later because of its effectiveness and scalability.

About the Author
Bryan McElroy

Bryan McElroy is a learning and development specialist with more than 20 years of leadership and project management experience. Having spearheaded the development of new, compelling e-learning content for several fortune 500 companies, Bryan also brings over 15 years of experience in every aspect of production in the entertainment industry.

His most recent role was as a senior manager of L&D for Rush Enterprises, which has the largest network of commercial truck dealers in North America. As the leader of this learning and development team, Bryan developed all aspects of training. This included training everyone from C-suite to the frontline employees.