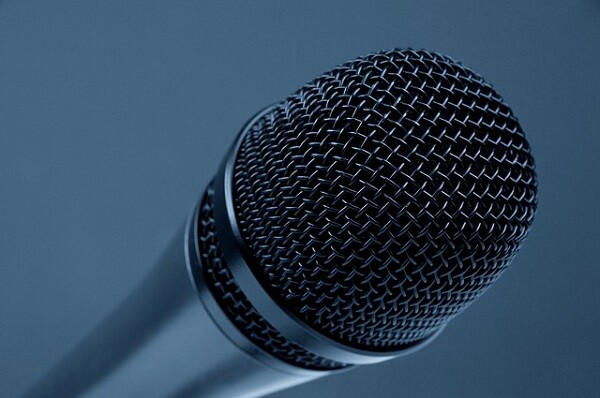 How can you use your voiceover script to keep a learner’s attention within an e-learning lesson? Here are the two most important factors: Make it proportional and make it conversational.

Make the voiceover proportional to the action

In a recent informal test at a conference for instructional designers, the audience started waving and yelling, “Stop! Stop!” after less than two sentences of voiceover text was read for one PowerPoint slide. Now granted, the second sentence was a doozy, weighing in at more than 47 words. But still, two sentences?

Just how short is the typical learner’s attention span these days?

It’s probably much shorter than you think. The learners we address with our e-learning projects are bombarded with information, often in the form of movies, videos, and television. Scenes change in modern movies approximately every minute and a half. But in a movie, even during that short time, something is continually moving on the screen.

On many kinds of e-learning products, there may be nothing moving at all, as a still slide rests on the screen or a still screenshot sits waiting for the next interaction. So with absolutely no motion on screen, how long can the audio drone on?

At the conference, the elapsed time was less than 12 seconds before the audience became impatient.

To some extent, the type of lesson will determine how much voiceover is proportional to each action. On a software demo video, a lack of action for as little as seven seconds can have the learner shaking the mouse to see if the video is still running—even if the audio voiceover is continuing. During compliance training, on the other hand, the learner may expect relatively longer voiceover descriptions and recitations of rules.

That doesn’t mean learners will like it, however. Consider aiming to have something move on the screen, illustrate the point, or change in some way about every two sentences. You can achieve the right proportions by either adding visual elements or shortening the voiceover script.

Use plain language and a conversational writing style

The writing style of your voiceover text will greatly affect how “listenable” it is. Long, academic-sounding, repetitive sentences will have your learner eager to move on quicker than short, plain-language sentences.

Test yourself: Try reading each of the following paragraphs. Which one makes you want to stop reading sooner?

Example A: The capability for the creation of user-defined functions has been instituted with the current version. This capability is not entirely new, but was previously available via pass-through to and from a custom module, which is a function of most programming languages. However, these modules did not allow this functionality to be embedded directly within another function, and this inherent limitation was a source of frustration to users.

Example B: In a previous version of the program, you could create a custom function, but only within an entire custom module. Now, you can embed your own custom functions directly inside another function. This means there are now countless ways you can use custom functions within your own applications.

With little change in the technical terminology and content, Example B will seem easier to focus on for most learners. The best writing style for a voiceover uses shorter sentences, addresses the learner directly, uses plain language when possible, and uses active rather than passive voice.

Remember that the voiceover for a lesson is written for a voice. Make that voice conversational, rather than academic in style. Also, make it proportional to the amount of action on screen, and you’ll keep your learners clicking painlessly through the lesson and remaining focused.
To learn more, join me for an ATD Essentials of Writing Effective E-Learning Voiceover Scripts online workshop.

About the Author
Jennie Ruby

Jennie Ruby has more than 15 years of experience as a trainer and courseware developer. She is experienced in the delivery of online training and has authored multiple training books as well as numerous writing and editing courses. She has worked with IconLogic to create effective training materials and books and has delivered courses on writing training documents, e-learning scripts and voiceovers.

Jennie has an M.A. from George Washington University and is a Certified Technical Trainer (Chauncey Group). She is also a publishing professional with 20 years of experience in writing, editing, and desktop publishing.