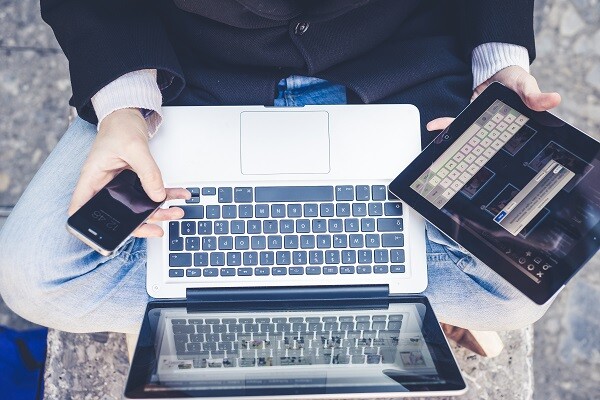 What Do You Know: Does Multitasking Improve Performance?

In a previous blog, I discussed the term digital natives. Some say we should train digital natives differently because young people have grown up with technology and the Internet in all parts of their lives. But research shows that the concept isn’t valid, and neither is using different approaches to training them. Instead, we should use evidence-based learning strategies for all because we all have the same “cognitive architecture” (how our mind and memory works to process, retain, and apply information).  But one aspect of the digital natives debate is true: Younger people do tend to multitask (especially using technology) more than people who are older. Does their multitasking add value in today’s jobs? The rationale for considering this issue is that job tasks are becoming less stable so people need to continually learn in order to keep up with new task demands. (Read “The Future Is Now: Transformation of Work and Skills” to learn more.)

Before we look at the research about multitasking and consider if multitasking can help people with this challenging job issue, read the question below and select what you think is the best answer. Then we’ll discuss what research tells us.

A. Yes. Younger people can multitask so it’s likely a skill we can teach to others.

B. Yes. Jobs are demanding more so multitasking is needed to perform better.

C. No. Only younger people can effectively multitask.

D. No. Multitasking is a harmful practice.

Especially with the advent of digital and mobile technologies, many people are splitting their attention (multitasking) between multiple devices and sources of information. For instance, watching the television and reading or looking things up on a tablet or smartphone. Answering text messages and talking to someone at a restaurant or across the dinner table (Hello! Rude!). Research shows that younger people report splitting attention more than slightly older people, who split their attention more than even older people.

Cognitive research shows several important outcomes about how and whether to use multitasking:

These outcomes point to multitasking being a significant distractor, not a help. When people estimate if multitasking will impact their performance, they estimate how well they can do the task without multitasking and subtract a small percentage. In reality, however, the decrease in performance is much more significant. This may explain some risky situations such as texting while driving.
Although many people think they need to multitask, they might think differently if they understood what research says about multitasking. Cal Newport, author of the book Deep Work: Rules for Focused Success in a Distracted World, tells us that multitasking damages the ability to focus. And focusing is one of the most critical skills needed to do complex work.

Newport’s work is not alone in showing this phenomenon. Media multitasking, consuming more than one element of media content at a time, is commonplace. Ophir, Nass, and Wagner’s research analyzed differences between heavy and light media multitaskers. Their research showed that heavy multitaskers had a more difficult time than light multitaskers at not getting distracted and switching between tasks. This is the opposite of what we might expect to find.

Our brains can only focus on one thing at a time. Multitasking reduces performance because it introduces cognitive load and reduces focus. But the bad news on multitasking gets worse. Neuroscientists Loh and Kanai’s research found that high multitaskers had less brain density in certain important parts of the brain. This supports earlier studies showing high media-multitasking and low ability to focus, especially with distractions. Researchers seem to be unsure as to the cause and permanence of these outcomes.

The answer to the question I posed near the beginning is a resounding No. Multitasking is a harmful practice. It appears to be quite harmful to the people who do it. Kep Kee Loh’s quote says it best:

“I feel that it is important to create an awareness that the way we are interacting with the devices might be changing the way we think and these changes might be occurring at the level of brain structure.”

What should multitaskers do? Here are a few of the suggestions: Realize you have a choice, finish a task before moving on, and rebuild focusing capabilities when distractions interfere. Very little is as important as the health of our brain.

While writing this article, I had several distractions and forced myself to not attend to them. I think it’ll take me a while but I’m convinced. You?

These URLs were available at the time I wrote this post. URLs often change, so if they are not active when you read this, search for them by cutting and pasting the title + PDF (example: Higher media multi-tasking activity is associated with smaller gray-matter density in the anterior cingulate cortex PDF).