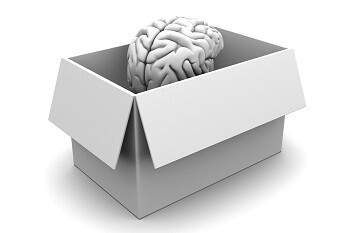 If you recognize the name B.F. Skinner, you probably associate him with behaviorism, a school of psychology that claims to explain all human behavior as a response to stimuli from the outside world (reward or punishment). Skinner had no patience for attempts to study feelings or cognitive processes. He maintained that we had absolutely no evidence that these reported internal experiences were real. If we want to change behavior, we need only change the stimuli, as the movie based on his work, A Clockwork Orange, graphically demonstrated.

To behaviorists, the mind is a “black box.” In science and engineering, the term black box refers to any complex device for which we know the inputs and outputs, but not the inner workings. For example, to many of us, our DVR is a black box. We push the buttons on the remote, select the program we wish to record, and we watch it later. We neither know nor care how it works.

Here’s basically what behaviorists saying: “The brain is so complex we can’t possibly understand it, so why bother? We know the inputs (stimuli) and we know the outputs (behavior) and isn’t that enough?”

It would be tempting to dismiss Skinner and his followers, but that would mean ignoring all the ways in which reducing the mind to a black box has produced positive results. When parents put a child into a time out, they are applying one of Skinner’s recommendations for child raising. Other examples can be found in today’s self-help books, leadership training, and addiction treatments. We need to ask ourselves, “Was he right after all? Should we focus on inputs and outputs because understanding the black box is beyond our capabilities?”

Is the Brain Really an Unknowable Black Box?

The human brain would certainly qualify as a black box in the traditional sense of the term:

• It is highly complex. In fact, it is the most complex object we know of in the entire universe.

• We can identify the inputs and we can observe the outputs, but we’re unable to define the detailed processing that takes place in between. (Although we’re certainly trying to.)

• We can draw conclusions that result in reliable results, based on controlling the inputs to produce desired behavior.

While it is exciting to speculate about what the latest neuroscience study tells us about how we learn, the truth is that we are far from understanding the processes of learning, memory, and retrieval. As with any field of science, most discoveries only lead to more questions, rather than answers. A recent survey of scientists and futurists identified understanding the mechanisms of consciousness as the number one unanswered question in science. But that doesn’t mean we should give up trying. It is unlikely that a single breakthrough will suddenly make it all perfectly clear, so we keep inching closer to a deeper understanding of ourselves. Even the occasional step backwards to incorporate new information is ultimately a step forward toward our goal of understanding ourselves.

What Can a Learning Professional Do With a Black Box?

All this might have you scratching your head, wondering what to do if we can’t even be confident that we know what we think know. The truth is, we’ve been doing that all along; each generation of teachers and trainers does the best they can with the information they have. Remember learning styles? I was once an enthusiastic practitioner of a now-debunked concept. I’m sure I’m not the only one.

Check out this list of practical things you can do right now to apply a few simple concepts to your training program:

• Teach people how to learn.

• Make sure learners get enough sleep (most adults don’t).

Doubt Is Our Super-Power

Humans aren’t the strongest species, nor the fastest. We don’t have superior eyesight or super smelling capabilities. What we do have may not be unique to us, but we certainly have it in spades—we are hardwired for discovery. The more we question our world, the more we learn about it. Philosopher Rene Descartes is often quoted as saying, “I think, therefore I am.” However, a more accurate translation of his words would be “I doubt; therefore I think; therefore I am.” The more questions we ask about ourselves, the more answers we’ll eventually find. Along the way, we’ll find more and more ways to help our black box work more efficiently.