Why the Command-and-Control Mindset Is Killing Your Company 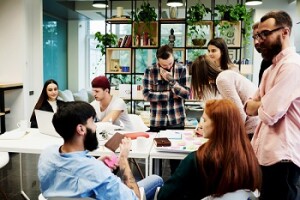 The world has reached a key moment in the history of the way we work. We have entered a new business environment, dictated by rapid changing technological variables that create an entirely new economic landscape. Exponential growth of our interconnected world forces us to see the world anew. The 21st century asks for a different mindset now the rules of the game have fundamentally changed.

In this game it is not anymore relevant to optimize an organization's efficiency based on a stable set of known variables. Instead, there's a strong need to adapt as fast as possible to increasingly complex working conditions. Efficiency has to make place for engagement and adaptability. The organizations that know how to fully engage their employees and those who are natives in this information-rich, densely interconnected world of the 21st century are the ones that thrive.

The Origins of General Management Beliefs

Most of our current organizational models find their roots in the industrial revolution and are mainly based on two movements: Frederic W. Taylor's scientific management (1911) and Max Weber's bureaucratic management (1922). Taylor's and Weber's everlasting pursuit for efficiency forced many organizations to squeeze out the most with the least amount of energy, time and money.

Their movements successfully introduced strong hierarchies, rigid rules and made work increasingly specialized. That's why we are now all used to shape our organizations like pyramids with departments that are all built up and separated by a plenitude of management layers. Most of us have precise job functions, roles, and responsibilities that are strictly defined. 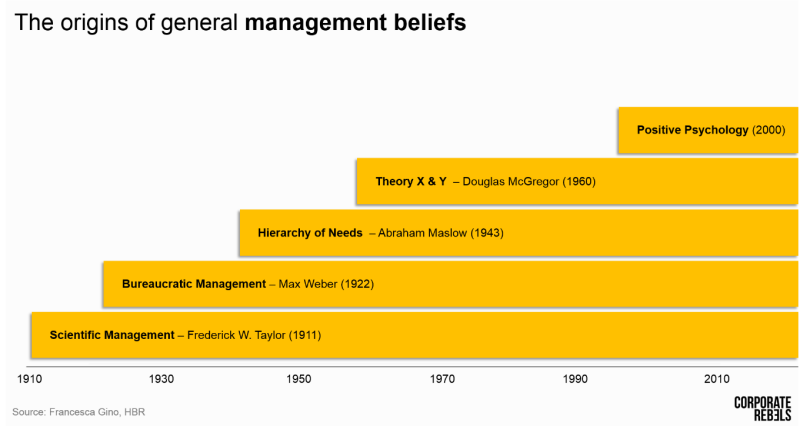 Once upon a time this approach made sense. It showed to be a successful formula for lots of companies, and dominated large parts of the 20th century business environment. But the world has moved on, and the same bureaucratic mindset has caused a widespread employee disengagement problem.

The remainder of Taylor's mindset forces the majority of employees inside today's organizations to deal with work that is simply not fun. In the contemporary working world this mindset hinders most employees to be able to fully exploit their talents. The consequences are disastrous.

A Big Change Is Coming

Sadly, the way we organize work makes it harder for us to get work done, not easier. Decision making is incredibly slow. The way we collaborate and communicate is frustrated by politics. And when we go to work on Wednesday, we already start to celebrate the upcoming weekend. Our desire to take initiative or to innovate are discouraged.

Looking at the statistics above there's a big chance you, too, are disengaged at work. Gallup's global survey of employee engagement found that only 13 percent of employees are actually engaged at work, 63 percent are not engaged, and a staggering 24 prcent are actively disengaged.

To put it mildly, this is a shame. Especially because decades of research by Gallup prove that highly engaged employees perform better (like increased productivity, better quality products, and increased profitability). Think of all the untapped potential and missed opportunities in business, education, health care, and NGOs.

There Are Winners and Losers

Despite the fact that our current management beliefs date from the previous century, still the majority of organizations today operate with models that are inherited from a world that no longer exists. The models are already outdated, and surely not future proof. The era in which the command-and-control approach would bring you immense success have long gone.

Still most of the contemporary organizations seem to have become way too comfortable with Taylor's status-quo and have a hard time changing it. Suddenly, they find themselves poorly equipped to thrive in today's business environment. They are the ones losing. Of the original Fortune Global 500 companies in 1955, only 12 percent survived to this day. More shockingly, in the last 15 years, 52 percent of them have disappeared. 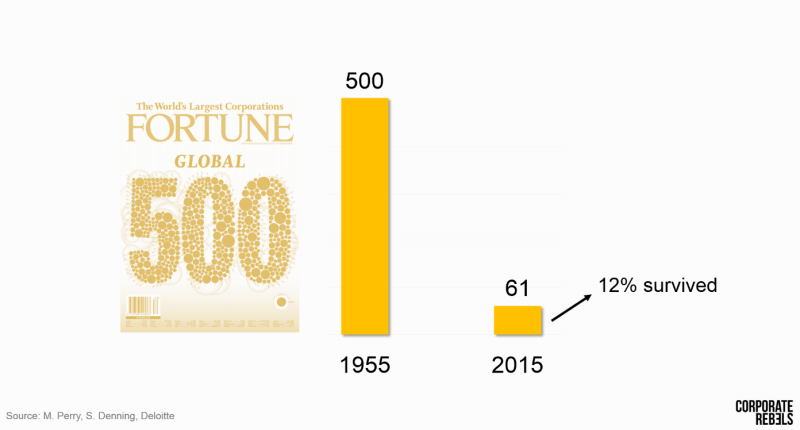 While the bureaucratic organizations are disappearing at the speed of light, their average lifetime is rapidly reducing as well. In 1960, the average S&P 500 company still enjoyed a lifespan of about 60 years. Over the years the same company lifespan has dropped to an average of only 15 years! Their struggle is not an exception, it seems to be the new norm.

The dying organizations forgot to challenge the status-quo, which, apparently, is a dangerous game to play. It can lead to inertia, boredom, and disengagement of employees. Organizations like Kodak, Blackberry, Motorola, Lehman Brothers, and Enron are but a few of the many companies that became overly comfortable and lost their battle. 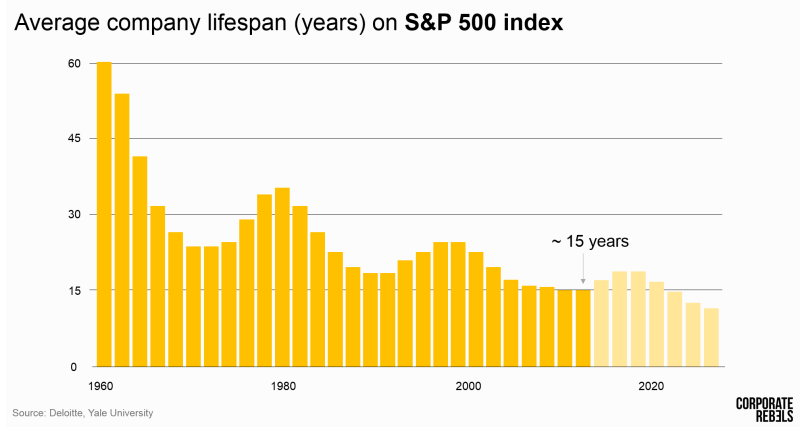 In today's world, the most engaging organizations are able to thrive because their engaged, empowered, and happy employees make the real difference. People desire an inspiring workplace that brings them fulfillment beyond just a monthly salary. And in return, they will reward organizations for it. When work is exciting and motivational, people will thrive and organizations will flourish. This is not just our belief, this is the new reality.

The most persuasive evidence can be found in the financial data. A recent article by Harvard Business Review showed that investing in Glassdoor's Best Places to Work will provide you with a way better return than investing in the average S&P500. 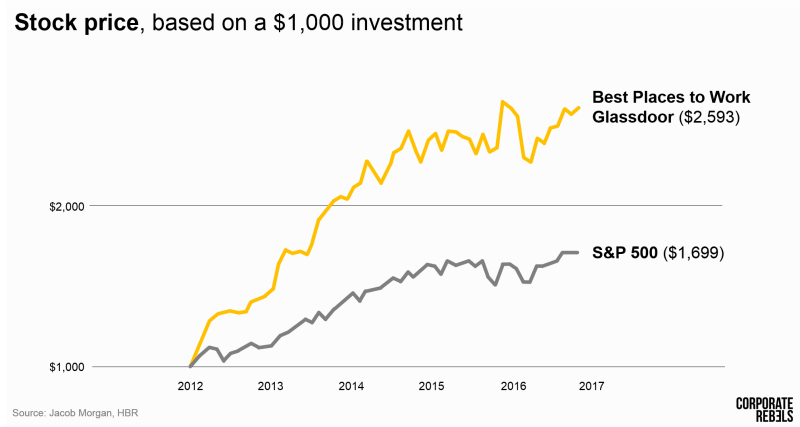 A meta study by Gallup underlines the positive influences on organizational success. They found that workplaces with the highest levels of employee engagement seriously outperformed the ones with lower engagement scores. The engaging workplaces enjoyed significant higher levels of profitability, productivity, and customer ratings. But also significant lower numbers on turnover, absenteeism, safety incidents, and quality defects.

The outcome of Gallup's study clearly shows the strong correlation between employee engagement and business performance. Moreover, the findings were proven to be highly consistent across different organizations from diverse industries and regions of the world.

There is convincing evidence that organizations that focus on creating engaging workplaces move themselves in a position to flourish. More and more organizations start to understand this and are trying to follow in the footsteps of pioneers by updating their way of working. They are searching for “The Promised Land.”

And when we talk about The Promised Land, we don't talk about high-fives, free meals, or other superficial perks. These aspects might boost employee happiness for a short period of time, but ultimately lack the power to last. We are talking about designing workplaces that are able to meet the intrinsic needs of employees. Over the last 14 months, we have visited more than 50 of such workplaces. They show us The Promised Land time and time again--a place where highly engaged employees are responsible for high levels of agility, productivity, profitability, and talent retention.

To reach this Promised Land we first have to unlearn almost everything we think we know about organizing work. Almost everything we have witnessed during our visits to these organizations is contrary to the beliefs of traditional organizations. We, therefore, need to spread this new management paradigm that does no longer support rigid hierarchies with managerial command-and-control. We should stop to reinvent practices that do not work, but go beyond our traditional beliefs and ideologies. And we should clear our mind from the old paradigm so we can start to fill in an entirely new canvas.

About the Author
Joost and Pim Minnaar and de Morree

Joost Minnaar and Pim de Morree, known as “The Corporate Rebels” to their readers, are on a mission to make work more fun. They quit their frustrating jobs to find a solution to a widespread problem: 87 percent of employees are disengaged at work. They travel the world and learn from workplace pioneers by checking off their renowned Bucket List. They share their findings and everything they learn about the unique workplaces they visit on their blog and through keynotes and workshops around the world. They also support organizations to become more progressive, inspiring workplaces. Contact the Corporate Rebels through their website (http://www.corporate-rebels.com) or on Twitter at @corp_rebels.