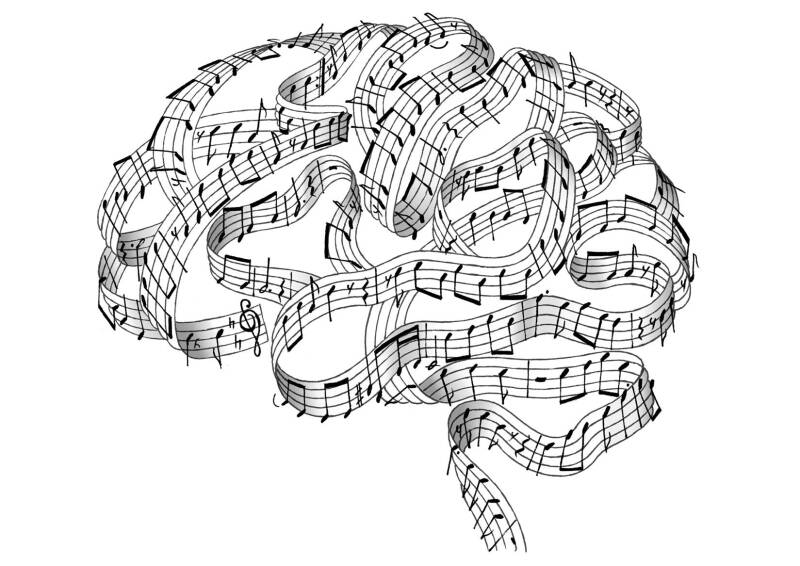 Your Brain Is Wired for Music

Pythagoras, Greek philosopher and mathematician, is recognized for discovering the relationship between the length of a string on an instrument and the pitch that the string produces. He believed that this correlation was part of a harmonic relationship that connects everything in the universe, which he called “The Music of the Spheres.” While Pythagoras didn’t have the benefit of today’s brain imaging technology, he just may have been right.

Music May Be Our Native Language

Multiple studies in neuroscience and psychology suggest that infants demonstrate an innate ability to respond to music and suggest that, from a processing perspective, “spoken language is a special type of music.” Anthropology suggests that human language and music have a “shared evolutionary history,” demonstrating that as human language evolved, our musical expression evolved along similar lines. This observation originated with Darwin, who suggested that the first humans may have communicated in song, rather than in spoken language as we know it today.


It All Starts With Vibration

Vibration generates waves of high and low compression. Human brains interpret waves that fall between 20 to 20,000 Hz as sound. The vibration, typically carried by the air, enters our ear, eventually stimulates the auditory nerve, which sends a signal to the brain. Here’s where the fun begins: the more generalized sounds that we experience throughout the day are processed primarily in the auditory cortex, where specialized neurons have been tuned to specific frequencies through experience.

But music isn’t just a single sound; it’s a complex weaving of sounds, mixed with rhythm and sometimes language. Using brain imaging technologies, including fMRI and PET scans, neuroscientists have discovered that music engages multiple parts of the brain:

It is this powerful, widespread, and instantaneous effect on multiple parts of the brain that may explain the powerful ways that engaging with music enhances seemingly diverse brain functions. Playing a musical instrument enhances key cognitive functions, including problem solving, memory, planning, attention to detail, and emotional intelligence. Perhaps the best example of how frequent, disciplined playing of music affects these skills is Albert Einstein, who was an accomplished violist and often played his instrument to sort out difficult problems. Listen to just how accomplished he was in this rare recording of him performing.


Our Brains Are Predicting the Next Note

During our workshop, Essentials of Brain-Based Learning, we investigate the predictive power of the human brain. This predictive capacity is believed to be a key factor in our survival as individuals and as a species. It also is a key part of the learning process and explains why stories are so powerful for engaging learners and changing behavior.
Advertisement

Your brain is constantly performing complex predictive calculations, based on sensory information and memories of experience. This pattern recognition plays out in our ability to read music and convert the written notes into specific movements of our bodies that generate sounds at specific pitches, volumes, durations, and rhythms. Even an untrained brain responds almost immediately to music and begins to predict the next note before it is even played. Watch artist Bobby McFerrin demonstrate how his audience predicts the next note in his performance without prompting.

As talent development professionals, we need to broaden our view of music and think of it as a core information processing skill, rather than an aesthetic “nice to have” pastime. Engaging with music can help your audience:


Indeed, neuroplasticity teaches us that it is never too late in life to take up a musical instrument, and the cognitive benefits could be substantial. Let’s channel our inner singer and give our brains the gift of music!