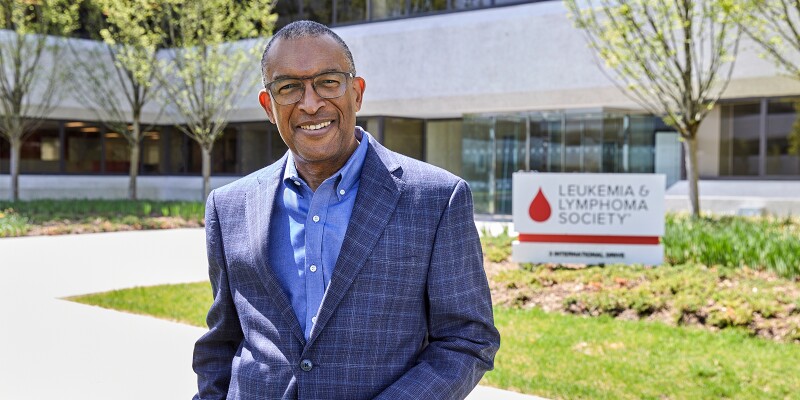 TD executive John P. Wiltshire shares that growth may mean stepping back or to the side.

"We hope to put ourselves out of business." Those words from a CEO to his organization may sound strange to the uninitiated. But John P. Wiltshire, vice president of talent development at the Leukemia & Lymphoma Society, says it's a common refrain President and CEO Louis J. DeGennaro says to LLS leaders.

Since 1949, LLS has been the global leader in the fight against blood cancer. Through its fundraising efforts, it has sponsored more than $1.3 billion in cutting-edge research to advance scientific treatment breakthroughs in immunotherapy, genomics, and personalized medicine. When considering the nonprofit's mission to cure leukemia, lymphoma, Hodgkin's disease, and myeloma and improve the lives of patients and caregivers, it's easy to understand DeGennaro's statement.

The goal of shuttering its doors is just one example of how the voluntary health organization approaches work differently. Wiltshire makes clear that a prevailing mindset among LLS leadership is to be unafraid to take a step back and analyze the organization's true focus and functionality.

The nonprofit also concentrates on being a source for blood cancer information and education as well as a support system for patients, survivors, families, and healthcare professionals as they navigate treatment. Another element of its mission is to advocate for policies at the state and federal levels to ensure patients have access to quality, affordable, and coordinated cancer care.

Wiltshire and his five-member TD team are charged with ensuring the organization's 900-plus employees at dispersed locations have the capabilities and knowledge they need and also careers that are engaging and enable them to develop and grow.

"Our efforts in career development are critical to the organization," he states. "In every employee survey, responses come back to feelings of ‘where do I go from here?' Employees want to know: What are their career options?"

But career development paths became cloudy a few years ago when LLS flattened the fundraising departments by streamlining roles and creating a more consistent way of operating the organization.

"While this change created a sense of structure, it also created a feeling of ‘well, now I don't know where to go with my career at LLS.'"

The nonprofit had to reconsider how it viewed career progression, says Wiltshire. He notes that many organizations have revised their thinking about an individual career as a ladder that measures success strictly by how far someone rises to a lattice where someone can make lateral and upward moves throughout their career. But he and his team have taken that idea a step further, equating career progression to climbing a rock wall.

"In climbing a rock wall, you can rise vertically. You can also make lateral moves if you choose. Or to get a better foothold, you might have to take a step back," he says.

"And that's OK, because once you know your goal, taking a step back allows you to gain a stronger foothold and positions you for a new direction that will take you to your ultimate target."

To bolster the concept that up, down, and lateral moves can create a forward career trajectory, Wiltshire and his TD team developed a set of job profiles. The profiles have many elements of a typical job description, such as outlining the necessary skills and knowledge required to succeed, but they also present information in terms of where employees with that profile can move within the organization, from whom they should be learning, and how to develop and maintain a network.

The TD team additionally developed assessments to help staff gain a sense of their career values. "So, before employees simply say, ‘I want that role,' they review their skills and examine their values," Wiltshire says, adding that employees may find a career opportunity they didn't anticipate.

When Wiltshire joined LLS six years ago, he and his team created a 15-week leadership development program. But in 2020, like other companies during the pandemic, they halted some learning programs.

With support from the chief human resource officer and chief operating officer, Wiltshire's team used the break to evaluate the leadership development program's value and explore whether a different solution would be more effective.

"It wasn't just me and my team saying this is what leadership should look like. Instead, we worked with others to identify skill gaps and talent needs," he says.

By analyzing employee survey results and conducting focused discussions with senior executives, the TD team was able to identify critical deficiencies with the nonprofit's leadership bench.

"The analysis revealed a set of skills and knowledge unique to LLS," Wiltshire states, with leaders needing a combination of general business acumen; core people management capabilities such as communication, delegation, emotional intelligence, inclusion, and feedback; and knowledge on LLS-specific procedures and policies around fundraising and managing volunteers.

With the necessary skills outlined, the TD team set about curating resources from the existing programs and then creating new solutions where there were gaps.

"Did the curriculum design pass on the first presentation? No. For example, fundraising was a sticking point," Wiltshire says. "So, we went back and forth with key business leaders several times to deliver learning that broke down how to get work done when leaders need to elevate their mindsets and be more strategic working at the 35,000-foot level. This is what leaders need to know to support their teams."

In the end, what was a 15-week program evolved into an eight-month learning journey that concludes with a two-day simulation capstone event facilitated by an external partner. More importantly, having the confidence to take a step back and admit there is a better way to develop leaders was its own leadership lesson.

Knowing how critical diversity, equity, and inclusion is to an organization's performance, Wiltshire's team didn't hesitate when LLS declared DEI an organizational priority. When the organization brought on board Chief DEI Officer Susan Goss-Brown, who advocated for a DEI awareness campaign, Wiltshire was quick to agree. His team enthusiastically worked with Goss-Brown to create a 21-day journey that challenged every employee to read a DEI-focused book or article or watch a video daily.

"Our principal goal was to create awareness around DEI's impact on the organization and the community," says Wiltshire.

After the awareness campaign challenge, the TD team worked with the DEI team to build and deliver two three-hour awareness workshops for key business leaders—one on implicit bias and the other on implicit bias mitigation. Wiltshire reports that the awareness workshops were well received and were made available to the rest of the organization. As of April 2022, LLS delivered the workshops to more than 90 percent of staff, with plans to deliver them to the rest of the workforce, including new hires.

"Will we see a change overnight? We probably won't. But we have reached an important level of awareness. People are understanding what bias is," says Wiltshire.

Awareness is essential, he asserts, because bias doesn't just affect the workforce. The nonprofit also needs to think about its impact on the populations it serves.

Wiltshire notes that blood cancers make no distinction to race. For example, Black Americans have at least double the incidence of myeloma as any other race or ethnicity, and recent studies show they face additional barriers and lower access to care.

LLS employees working in that area of research and advocacy can benefit from bias education, Wiltshire explains. Armed with awareness and mitigation strategies, staff can start to think differently about how they solicit and work with volunteers.

"Bias can affect how we encourage, how we promote, how we ensure that we're bringing in those diverse volunteers and diverse populations to help us advance our mission," he says.

As an organization, Wiltshire explains that LLS needs to think about new fundraising initiatives that are more inclusive of people of color. He adds that they also need to find different ways to reach out to diverse populations so that LLS includes them in existing opportunities.

Wiltshire will be the first to admit that he's not a fan of recording a Zoom meeting and calling it training. "That's information. That's not training. I'm not interested in delivering that as learning content," he states.

Unfortunately, that's exactly what the pandemic forced many TD functions to deliver during the past few years. During that time, Wiltshire challenged his team to think differently about how they could design and deliver learning and information to the workforce.

One key change TD team members made was to embrace their roles as curators and guides. For example, when employees have a development need related to managing or leadership, the learning designer starts by pinpointing whether LLS has existing assets.

Employees already had access to a library of online courseware through LinkedIn Learning. But as of March 2020, employees had accessed few hours of learning that year. So, the team set about curating and recommending courses, and usage skyrocketed. Likewise, the number of LinkedIn videos viewed increased nearly threefold from 2019 to 2021.

Other times, the TD team focuses on identifying external experts and offerings rather than building a complete program from scratch internally. In fact, when partnering on outsourced solutions and tools, Wiltshire says he has been able to leverage connections formed during his tenure at such large corporations as Citibank, MetLife, and Ernst & Young.

Once designers have identified a resource, they work with them to modify the assets for the LLS audience or to capture their insights for a new piece of content altogether. That mindset change from trainer to learning curator and guide has helped the TD team cultivate a culture of learning, says Wiltshire. "I think finally we're able to really offer learning at the point of need," he adds.

Wiltshire explains that instead of a classroom or e-learning only available on employees' office computer, point of need means learners can access a short podcast discussing a current trend, a video that explains a specific process, a course required for compliance, or development activities that create career momentum. And he's proud to note that learners can generally get that on their mobile devices.

"That's the true point of need. That's ubiquity of learning." he says. "That's how technology is changing the way we deliver learning for the organization. It's a different mindset, and it's working for us."