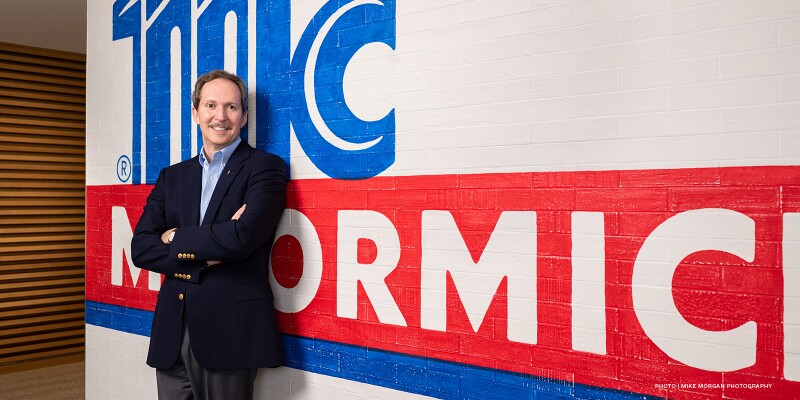 A Healthy Mix of Innovation and Purpose

In 2007, when TD magazine featured McCormick & Company's then CEO Robert J. Lawless, Lawrence Kurzius was serving as president of the company's Europe, Middle East, and Africa region. Now as chairman and CEO of McCormick—which manufactures and distributes spices, condiments, and other flavoring products to the entire food industry—Kurzius oversees a company that has grown significantly during the past 15 years in terms of workforce, products, and annual sales.

Since taking the helm of the company in 2016, Kurzius has introduced organization-wide initiatives with an eye toward driving innovation and purpose-led performance, two principles he hopes will outlast his tenure. We met with Kurzius to discuss those and other talent development initiatives—including the Multiple Management Board program, which marks its 90th anniversary this year.

How has talent development changed at the company since 2007?

There are two big changes that we've had in terms of talent development. The first is around strategy. We have committed strategically to be a learning organization and more of an academy company to our industry than we historically have been. We had previously thought of ourselves as just too small to have a great learning and development program.

Second, people grew in their jobs and in their roles but in a way that wasn't really structured. Today we think of ourselves as being more of a developer of talent, not just for McCormick but for the industry as a whole.

We want anyone's time at McCormick, whether it's a full career or a relatively short tenure, to be an enhancement to their resume. We believe it goes straight to our corporate reputation in the industry.

Tell us a bit about the Multiple Management Board program and what you believe are the contributing factors to its longevity and success.

This is a signature program for McCormick. The Multiple Management Board was started by Charles Perry McCormick back in 1932. He had just become CEO as a young man after the sudden death of our founder in the depths of the Great Depression, and he had very different ideas about how to run a successful business than the older generation of his time.

The Multiple Management Board was formed as something of a junior board of directors to give junior executives an opportunity to help solve the company's problems and to move decision making closer to the front lines. You have to understand what a radical idea this was at the time, when businesses were top down—you spoke when you were spoken to by your superior.

This idea of a junior board of directors had several benefits that have continued. These boards are self-governing, and I think that is really part of the magic that makes them different from just cross-functional teams. The membership comes from across the company or across a specific business unit or a region. They choose and work on projects that they think aren't being addressed by the company and where they can make a contribution. They query management about those projects and look for sponsors. At the end, they present their projects along with their recommendations to top management, including me.

Many of these projects have really been amazing. One of them took a look at our whole strategy-setting process and made some recommendations around ways that we can take a more consistent view of setting strategy in our consumer business and in our flavor solutions business. That had really big impact. Another one looked at our acquisition track record and identified the formula for success in acquisitions and some of the failures and developed a playbook around acquisition integration.

In addition to attending the final presentations, what other role do you play in MMB?

In terms of promoting it, the tone gets set at the top. This is extra work that people are doing beyond their everyday job responsibilities, and I want to make sure that their managers recognize that. I think it's important.

Being supportive of MMB factors into my evaluation of managers. If I have a manager who is not empowering their people to serve on a board or making time for the board, they're going to get some feedback from me about that being inconsistent with the McCormick culture. There's a section on the annual performance review that deals with that very question.

But it's more about carrot than stick. It's making sure that by my presence, setting the right tone at the top does not just trickle down but that people really want to emulate the behavior that the CEO wants and demonstrates. I'm not just at that final presentation—I'm there for the project pitches; I make myself accessible to the project teams if they want to interview me as part of their project; and I have been a sponsor for projects.

My involvement also creates a bit of proof of the idea that being on an MM board gives you exposure to top management that you would not ordinarily get. It's a great way for someone that's early in their career to build a network in the company, to get exposure to people at the top. I encourage all of our people to be involved.

I have met some people who are very junior in the company through the MMB where they want to interview me about a project or a question, and I think that's good for them. And frankly, it's good for me because the conversation always evolves to: Tell me about yourself. Tell me about what you're working on and what you are excited about.

One of the two main principles that you introduced to the organization is Driven to Innovate. How does McCormick espouse that principle in practice?

There are two sides to Driven to Innovate. The first is being at the cutting edge of everything there is about flavor and the pursuit of what's next in flavor. The second part of it is reinventing our business every day to make it better in every aspect. In that sense, everybody in the company has a responsibility to be thinking about how we can be better. If a company has reinvented itself periodically over the years in major ways and in an evolutionary way, it is reinventing itself every day.

Rather than make it an abstract principle, we introduced what we call the McCormick growth behaviors. The four growth behaviors allow employees to be more agile, enable more rapid execution of projects more effectively, and achieve growth and change. I'll name what those behaviors are.

Constantly reframe. Is there a way to think about whatever problem or challenge or day-to-day activity that you're facing that frames it differently and that allows you to reach a different conclusion or a fresh idea?

Move faster. It sounds so elementary, but it's hard to get organizations to move faster. What is the smallest executable step—we call it an SES—and just do it.

Dynamically allocate resources. Take funds from what's not working and move them into where they are working. Don't wait until budget time to make changes.

Use the whole McCormick brain. Get input from others around you. This especially goes to having diverse project teams and diversity in the organization.

We have training around each of these growth behaviors to make McCormick move faster in terms of innovation.

The second principle you introduced was the idea of Purpose-Led Performance, which revolves around doing what's right for people, communities, and the planet. Regarding the people aspect, what are some company-wide education and development goals and initiatives tied to that principle?

One of the goals under our PLP program is to have 95 percent of our exempt employees with clear, trackable development goals in our HR system. It's hard to talk about developing people if you don't have a plan for the people. There's a responsibility both on the manager and on the employee to create those goals.

And then the other is to make sure that we're ensuring equity and achieving the development opportunities for women and for ethnically diverse talent in terms of bringing them up through leadership. I don't think that McCormick has a particular problem, but there's room for us to do better. Our Ignite programs are intended to do that. We also have mentoring and sponsorship programs to help. You can't create opportunities without creating development.

In what ways do you believe that Driven to Innovate and PLP are having an impact on engagement, retention, and recruitment?

Someday I'm going to be retired, and people aren't going to remember all the business results we achieved. But they will remember those two things and the contributions to the culture because Purpose-Led Performance and Driven to Innovate have excited employees more than just about anything that we've done in the last five or seven years.

The best employees aren't coming to work for companies that are only interested in squeezing out the last dollar for the shareholder. They want to work for companies that are creating new stuff, that are thinking differently, that are looking for fresh ideas, and that are making our world a better place to live and have a purpose bigger than that last dollar for the shareholder.

In what other ways is talent development linked to McCormick business outcomes?

Talent is what makes the business go, and there is no substitute for having people with the best skills and roles.

It's about getting great managers and team leaders to know how to motivate their teams and get work done and to give them the tools to make us successful. But it's not just the leadership level. When we take it out into the manufacturing plants, with our Journey to Excellence program and the training that we do around technology and skills, our people find it empowering. It helps them advance in their careers. It gets discretionary effort from people because they see us investing in them, and they want to invest back in the company. That builds a long-term culture of loyalty and of wanting to give back to the next generation of people who come in behind you.

Learning and development is part of being a great place to work—where you have opportunities for success, you're learning new things, and you can see tangible progress in your career.

How do you stay sharp—how do you learn?

I also have an outside coach that I've hired to help me be aware of what my blind spots might be.

When I started in the job, I went to Harvard, which has a New CEO Workshop program. I'm a big believer in the mix of both academic and real-world experiences. So, to kick-start my CEO experience, I went back to school.

About the Author
Tony Bingham

Tony Bingham is the president and CEO of the Association for Talent Development, formerly ASTD, the world’s largest professional association dedicated to those who develop talent in organizations. Tony works with a staff of 130, a Board of Directors, and a worldwide network of volunteers to empower professionals to develop talent in the workplace.

Tony believes in creating a culture of engaged, high-performing teams that deliver extraordinary results. Deeply passionate about change, technology, and the impact of talent development, his focus is on adding value to ATD members and the global community of talent development professionals. He believes that aligning talent development efforts to business strategy, while utilizing the power of social and mobile technology for learning, is a key differentiator in business today.

About the Author
Vanessa St. Gerard