According to ASTD's 2013 State of the Industry Report, overall spending on employee training in U.S. organizations increased last year, to $164 billion.

In a continuously changing economic environment, organizations remain committed to organizational learning and development (L&D). In the 2013 State of the Industry Report sponsored by Skillsoft and Cara, 475 organizations representing a diverse sample of industries, sizes, and locations report on training metrics in their organizations.

In 2012, the Bureau of Labor Statistics estimates that on average 181,000 jobs were added per month and the unemployment rate fell one percentage point. Organizations adapted to the changing workforce size and managed to keep the average direct learning expenditure per employee stable at $1,195 in 2012, which is $13 higher than the average in 2011.

Spending per employee is affected by several factors. One major factor is the size of the organization. Smaller organizations, particularly those with fewer than 500 employees (which account for 36 percent of responses in this study), typically spend more per employee than larger organizations. They rely more on external services and tuition reimbursement plans, and have a smaller L&D staff.

The question that remains to be answered is how organizations are continuing to offer new training and maintain spending levels, yet the number of training hours used by employees has remained relatively flat during the past four years. There are a few reasons why this may be happening. One of which might be the increasing role of technology usage for training and the shift toward e-learning. Another might be increased usage of informal and social learning.

What all three of those methods have in common is that their usage by employees can be difficult to measure in time increments, and they often don't easily align with an organization's learning management system. Mobile learning is a good example of this.

The 2013 study Going Mobile: Creating Practices That Transform Learning, conducted by ASTD and the Institute for Corporate Productivity (i4cp), found one of the major challenges of implementing mobile learning is measuring its usage and effectiveness. Forty-one percent of respondents in that study who use mobile learning admitted that their organizations do not have metrics in place to assess the program's effectiveness. More than half of survey respondents said their organizations use mobile learning for just-in-time learning (65 percent), job aids (63 percent), and on-the-job support (52 percent). How much time an employee spends in the app accessing this valuable information may prove to be elusive as organizations are challenged to measure it.

Another method in which employees are learning but not necessarily recording the hours doing so is through informal learning. In the 2013 ASTD/i4cp study Informal Learning: The Social Evolution, 27 percent of respondents reported that informal learning represents more than half of the total learning taking place in their companies. However, it is difficult to pinpoint and record the exact number of hours an employee participates in informal learning, such as online social networking, accessing knowledge through Internet or intranet searches, and peer-to-peer coaching.

Examining these shifts in training methods and the role technology is playing helps to explain how training budgets are changing. It also may help explain the increasing cost of learning hour available and learning hour used.

Without examining organizations' budgets, a definitive answer to the question, "Why is the cost per learning hour increasing?" is not available. However, some possible influencers could be the upfront costs of implementing technology as discussed previously, inflation, a decrease in the ratio of employees to L&D staff members, and the challenge of accurately recording all the training hours employees use.

To provide some guidance and benchmarking statistics, the State of the Industry Report tracks the number of employees per L&D staff member and the number of hours used and available per L&D staff member. Organizations looking to compare their own data with these numbers will not find value in matching their numbers to the averages since factors, such as organization size, play a significant role in these data.

What will provide value, however, is to examine how the data align with the other reported metrics. In 2012 the average number of employees per L&D staff member was 299 employees when adjusted for outsourcing. When not adjusted, the number increases to 400 employees to one L&D staff member. Both these ratios decreased 5 percent from 2011. The decrease in the ratio of staff members to L&D staff could help explain the rise in the cost of learning hours used and learning hours available.

Organizations continue to invest in their employees by offering training and development opportunities delivered in person or online. They are implementing new learning methods and technologies to stay relevant and control costs in economic conditions where they are being challenged to develop more employees with the same or fewer learning resources. Organizations are meeting these challenges by offering training in various ways, including in person and online.

Download or purchase the 2013 State of the Industry Report.

Since 1998, ASTD's State of the Industry Report has been the definitive annual review of workplace learning and development (L&D) investment. This annual report provides data covering the strategic and operational activities against which organizations can benchmark their learning investments and practices.

State of the Industry Report data are presented in three groupings against which training and development professionals can benchmark learning investments and best practices in their organizations. The three groupings (or comparative categories) are consolidated responses, ASTD BEST Award winners, and Fortune Global 500 companies. 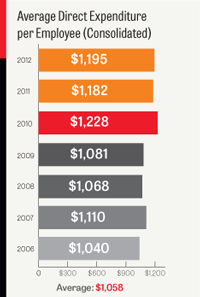 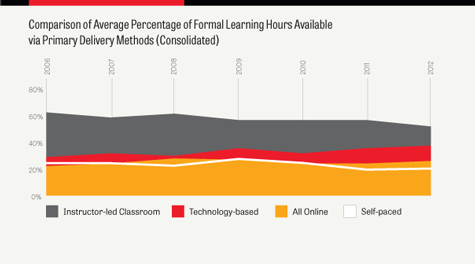 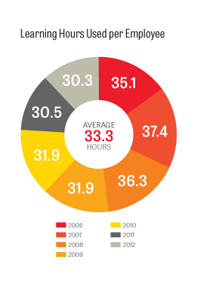 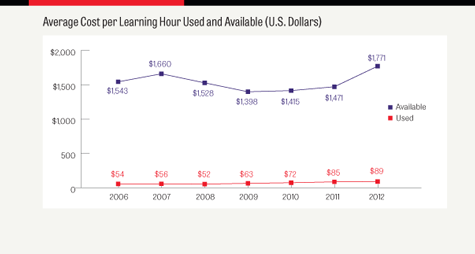 About the Author
Laurie Miller

Laurie Miller is the former director of ATD research services.