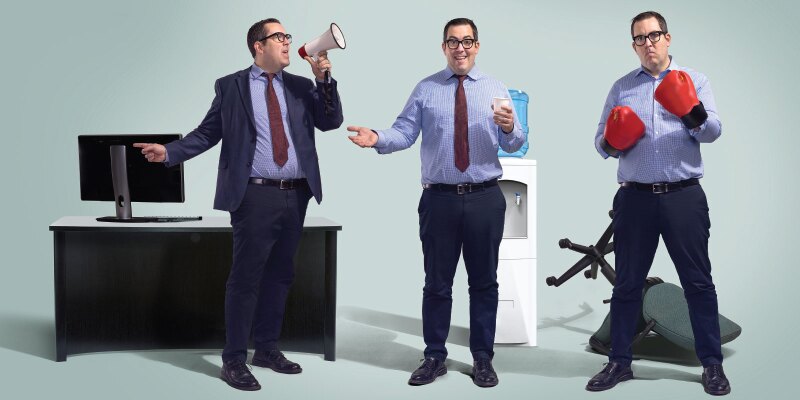 Learn to deal with the dark side of working relationships.

Unless you live in a vacuum, you know that relationships are hard. All the more so at work, where we have no control over whom we interact with every day. And while there's no shortage of advice on matters of the heart, working relationships are rarely commented on—until it becomes painfully clear that they're not, in fact, working.

Most managers are left to their own devices when it comes to building, maintaining, and repairing healthy working relationships. Given that the traits that made someone an outstanding individual contributor don't always translate to being a great manager, it's no wonder that those relationships break down. And when they do, the stakes are high.

When we get it right

In The Return of the Manager: This Time It's Personal, a Mind Gym study of what makes managers effective, the biggest differentiator was their relationships. Get them right, and everything else becomes easier. Feedback is better received, delegating is more straightforward, and coaching is more powerful.

The study found that individuals who have good relationships with their managers are healthier, happier, and have better careers. They perform better, put in more discretionary effort, and are more innovative, more resilient during change, and less likely to leave.

Relationships between team colleagues also are highly significant. In a study of staff of England's national healthcare system, teams that worked well together saw a 3.3 percent drop in mortality rates, equivalent to saving 40 lives per year.

When it goes wrong

Destructive relationships wreak havoc for individuals and for organizations. Robert Hogan writes in Personality and Fate of Organizations that organizational climate surveys show that for around three-quarters of employees, the most stressful part of their job is their boss. In a Gallup survey, half of respondents said they'd left their most recent job as a direct result of their immediate manager.

It's not a new phenomenon: Research dating back to the 1990s shows "job pressure" being cited in 75 percent of workers' compensation claims. Of those stress-related claims, 94 percent were allegedly caused by mistreatment and abuse from their manager. More recently, research shows that the effect of having a bad boss can be akin to post-traumatic stress disorder.

So there's a human cost to bad bosses. There are financial repercussions too, reaching into the millions. Given that Gallup estimates that managers account for 70 percent of the variance in employee engagement, the disengagement caused by ineffective bosses costs businesses $400 million per year. Not to mention the estimated $1 million it costs to replace every failed executive.

The symptoms of relationship breakdown are hard to miss. Increased absenteeism, higher turnover, a rise in ethical transgressions, and drops in productivity are all signs of trouble. Before we can prevent this from happening, we need to understand why it does.

Psychologists Hogan, Art Padilla, and Robert B. Kaiser identified a "toxic triangle" of factors that foster negative relationships between leaders and followers. The combination of dysfunctional leaders, susceptible followers, and a conducive environment create a perfect storm for toxic relationships to arise.

Managers are only human. Like all humans, they have a dark side that comes out particularly during times of pressure. Without clear guidance on how to manage the trickier aspects of their personality, leaders often revert to behavioral patterns they've relied on since childhood.

Adults draw on a combination of those coping mechanisms depending on the situation, but we all have a preference for one over the others. When taken to its extreme, this preference becomes dysfunctional.

Take the managers who prefer to turn toward others. They want to be everybody's friend, seeking approval to affirm their sense of self. These managers become the "buddy."

Nothing wrong with that, right? Except when it gets in the way of decision making. Or discipline. Or when their constant approval-seeking creates an overly politicized, cliquey organization in which top talent languishes or leaves because their hard work doesn't pay off as much as the in-crowd's fawning.

The "turn away" managers don't much care what other people think of them, so long as the job gets done. They're the stereotypical boss, interested in delivering on deadline at the expense of everything else.

Efficient, right? Except that they're missing a huge opportunity to deliver more, faster, and for less, if only they could supercharge their team's performance by leveraging their relationships. Focusing on results at the expense of relationships means teams are less loyal, less happy, and ultimately less likely to give it their all.

The "turn against" managers are the most obvious candidates for the horrible boss crown. These managers care about relationships, but only so they can twist and manipulate them for their own gain. They're the bully.

Physical or emotional abuse in the workplace is more common than we imagine. Judith Lynn Fisher-Blando's Workplace Bullying found that three-fourths of employees report that they've experienced it at some point in their careers. Unlike on the playground, workplace bullying is not aimed at the weakest link; in fact, top performers are the most likely targets.

And if you think bully bosses are few and far between, consider the Journal of Clinical Psychiatry's finding that 14-15 percent of the normal working population are classed as having a personality disorder. The paradox here is that, according to Hogan, most successful leaders usually have elevated scores on "dark side" personality traits. Suddenly those claims of "my boss is a psycho" don't seem so far-fetched.

For dysfunctional leaders to flourish to the extent that relationships break down irreparably, they need followers who will let them get away with it. That can mean conformers: those who are typically obedient to authority, are prone to groupthink, have low opinions of themselves, and are unwilling to challenge the status quo.

Or it can be in the form of colluders who see benefit in aligning themselves with a destructive leader. Colluders reinforce the leader's bad behavior, repress any would-be whistle-blowers, and help the toxic cycle to continue.

While dark-side leaders and their toxic followers are certainly bad apples, the barrel can be just as much to blame. After all, leadership doesn't happen in a vacuum; the organization itself is pivotal in fostering dark-side behavior.

A manager's behavior is shaped by the culture in which she works. If the culture is overly politicized and consensus is valued above all else, the inner buddy will come to the fore. If it's a results-driven environment in which targets must be met "at all costs," the boss is likely to emerge. And in a dog-eat-dog culture where aggression and intimidation are par for the course, the bully will rear his ugly head.

These are all extremes, of course, but every company's policies and processes, as well as the culture, values, and norms, will nudge its leaders to behave in a certain way. Often it's just the way things have always been done, so the impact goes unnoticed.

What can we do about it?

Five strategies make a difference to building a culture of good working relationships between leaders and teams.

Lighten up. We all have a dark side; instead of denying it, use it for good. Buddies are excellent collaborators and have a knack for creating cohesion. Bosses are unrivaled executors. Even bullies can be inspiring to work with and incredibly persuasive, if they manage to pivot their dark side toward the light.

Increasing the self-awareness of leaders to be able to manage their personality is essential.

Regulate emotions. We all have emotional trip wires: We start to see red when certain inner needs aren't met. These could be status (wanting to be admired, in the spotlight, and right), inclusion (feeling supported, valued, and that you belong), or autonomy (being independent and in control). Once we recognize what our trip wires are, we can anticipate our emotional reaction when these needs aren't met and plan a more rational response that doesn't affect our relationships.

Set appropriate boundaries. For working relationships to work, managers need to strike a delicate balance. Focus too heavily on the relationships, and the goals slip out of reach; ignore a team's needs, and commitment will falter. The answer? Boundaries.

Boundaries apply in every interaction, from giving feedback and dealing with poor performance to inquiring about a team member's well-being and sharing details about your personal life. Effective relationships are neither too close nor too distant.

Contract from the start. Just as there's a formal employment contract, in every manager-report relationship there exists a "psychological contract" about how you expect each other to behave—although these rules usually remain unspoken. Have a frank conversation about how you each see your role, how you'll work together, where you draw the line, and any behavioral non-negotiables. Making these assumptions explicit means there will be no room for misunderstanding.

Repair ruptures. Despite our best efforts, relationships will go awry. When that happens, we need a quick, effective repair kit. This comes in four stages:

Nobody said it would be easy, but given the impact of relationships on almost every measure of happiness and success, it pays to understand how to make our working relationships work.

About the Author
Mary-Clare Race