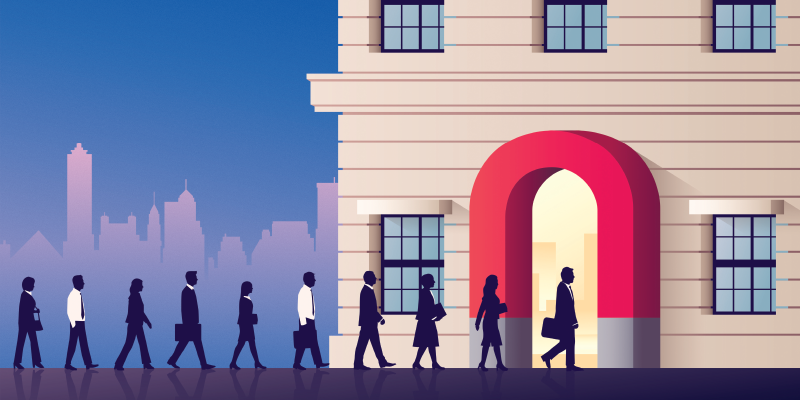 Can Government Organizations Really Be a Magnet for Talent?

The Tennessee State government is proving that it can.

When he first came into office, Tennessee Governor Bill Haslam and his cabinet conducted a top-to-bottom review of the executive branch. They determined that to accomplish their goal of a more efficient, effective, and customer-focused government, they needed to reform the state's antiquated civil service program. Like many other federal, state, and local government institutions, Tennessee was still functioning under a decades-old set of employment policies whereby employees were rewarded and promoted primarily on the basis of their tenure and not necessarily on the basis of their qualifications or performance. That archaic structure perpetuated the public's perception that state government workers were inefficient, entitled, and disengaged.

Like the state of Tennessee, many government agencies also have been in the midst of transitions and reforms marked by new guidelines defining how they recruit, develop, manage, and engage talent. Expanding government talent pools in the 21st century also requires new ways of engaging with local businesses to keep qualified talent in the state. For example, the state of Indiana is drafting legislation to make workforce development programs more accessible and cost-effective for businesses plagued by growing skills gaps.

In 2015, the National Governor's Association's Center for Best Practices cited Indiana, along with five other states—Iowa, Montana, New Hampshire, Utah, and Washington—as leading providers of work-based training and education geared to establishing career pathways for young adults and a talent pipeline for state businesses seeking to recruit and retain a skilled workforce.

Some may question whether government organizations can truly create the kind of engaging, service-oriented environments that are a magnet for talent attraction, retention, and job creation. In Tennessee, government learning leaders are challenging the bureaucratic status quo and beating the odds in the increased competition for a skilled, high-performing workforce.

In response to a push for civil service reform, the state enacted the Tennessee Excellence and Accountability Management (TEAM) Act of 2012, a landmark effort to transform and sustain the culture of state government. The act's foundational premise is that state employees should be compensated—like those in the private sector—on the basis of their qualifications and performance, not on the basis of seniority or length of service.

For the Tennessee Department of Human Resources (DOHR), civil service reform opened the floodgates for overhauling the state's stagnant hiring and promotions practices. The governor's vision "to become the number one state in the southeast for high-quality jobs" became a call to action for all state agencies and cabinet leaders. To enable this process, a chief learning officer role was created as an executive-level position overseeing 40 agencies. Tennessee was the first to award a CLO with a seat at the executive table in state government.

As the assistant commissioner of HR and CLO for the state of Tennessee, Trish Holliday's central role is to develop the executive branch staff and provide them with the tools and resources to meet talent challenges in state government. Here's how Holliday and the DOHR team worked with state leaders and administrators to meet the challenges of implementing a pay-for-performance system.

The transition from a tenure-based to a performance-driven, customer-focused government agency represented a massive culture change. In the early stages, the DOHR and its solutions learning team started with a group of senior-level stakeholders to create a shared vocabulary for communicating the vision and developing strategies around executing it. Key messages included the reassurance that the 43,000-plus people affected by the change would be given the tools and resources needed to succeed in the new performance landscape.

The DOHR ran culture change like a rebranding campaign and created opportunities to start dialogue and discussion. Listening tours with agency leaders, directors, and team leaders helped surface needs, challenges, and pain points. These tours also helped people understand that the DOHR and executive stakeholders weren't talking about changing just one branch of government or changing HR; they were trying to change it all. Employees started wanting to be a part of the change.

But even now, in this stage of the transformation, it's taken longer than the DOHR envisioned. In retrospect, adding more of the why earlier in the process could have made a difference.

"We believe that giving a voice to employees earlier in the performance cycle empowers them through recognition of their strengths and abilities and leads to greater motivation and performance," says Rebecca Hunter, commissioner of the DOHR.

To meet demands for a new kind of leadership, such as planning for leadership continuity and workforce development across all levels of government, the department launched several unique, enterprise-wide development initiatives.

LEAD Tennessee is a competitive, internationally recognized 12-month development program for executives and senior-level leaders as well as emerging leaders from every department in state government. It consists of six one-day summits focused on eight leadership core competencies.

There are nearly 1,000 Lead Tennessee alumni representing three branches of government. Last year, the program was recognized for innovation in deployment of leadership programs by the Leadership Excellence and Development Forum and HR.com.

"During my 32-year career working with and for some of the nation's top corporate, nonprofit, and government organizations, I have never seen a leadership system as thorough and as relevant as what [the solutions learning team] has created," says Derek Young, executive leadership coach for LEAD Tennessee. "The mixture of competency-based training, top-notch presenters, executive coaches, and individualized feedback produces a transformative process for state leaders."

The Tennessee Government Executive Institute is the longest-running leadership program in state government, with more than 1,000 alumni. It is a highly competitive two-week residential executive institute that provides senior-level leaders with the opportunity for academic study and learning in executive responsibility and cross-agency networking to enhance executive leaders' individual strengths.

The Tennessee Government Management Institute is a two-week residential management program for midlevel leaders selected on an application basis. It has more than 800 alumni spanning 17 years.

The Accelerated Leadership Institute is a high-powered development program that prepares high-potential employees who have not typically supervised for the critical role of leadership within state government. Participants focus on improvement in evaluating the ideas that will shape state government tomorrow, analyzing and producing innovative and imaginative solutions to real-world problems, and explaining their field of vision beyond a particular functional area or agency focus within government.

Mentor Tennessee, an enterprise-wide mentoring program, is being launched this year to support developing and retaining new talent.

These customized, comprehensive initiatives have dramatically increased employee engagement, promoted managerial and workforce excellence, and equipped leaders across all levels to deliver on the promise of efficient, effective, customer-focused government service.

In the early stages of transformation, middle managers were regularly invited to give input about the tools they needed to be successful in the pay-for-performance transition. Supervisors were taught how to use SMART (specific, measurable, attainable, relevant, and time-bound) goals for every employee. Learning was emphasized as a critical part of everyone's job responsibility.

By linking performance management and coaching and giving people the information and facilitation tools they need to succeed, the solutions learning team used learning to drive the change toward becoming a more customer-centric organization. Since 2013, participation in leadership training and development among the state's 7,500 managers has more than doubled.

Councils such as the Government Leadership Council and the Statewide Learning and Development Council were developed to foster ongoing connections, promote a continuous learning community, and engage employees in sharing how they are applying new skills and integrating new approaches with existing Baldrige, Black Belt, and Lean standards of performance excellence.

Commit to the long haul

The issue of sustainability played into DOHR's strategy design from the beginning. The department didn't want to build a system that's so tightly closed that it can't adjust to new leaders or new demands. Thus, to be sustainable, it can't be politically charged. The Tennessee Government Management Institute, Tennessee Government Executive Institute, and LEAD Tennessee have all survived administration changes because new leaders have come in and bought into the framework, which is open to their input.

Between demographic shifts, hiring freezes, the growing attrition of eligible retirees, and bureaucratic structures that fail to attract younger or more specialized workers, talent managers and learning leaders in government agencies face unique workforce challenges. In 2016, Gallup estimated the cost of growing skills gaps and disengaged workers to state and local governments to be up to $100 billion. In both the public and private sectors, learning cultures have continued to emerge as a key differentiator in the competition for talent.

Progressive learning leaders in Tennessee State government have grown a learning culture that is not only engaging but also high performing. The ability to adapt, innovate, and add strategic value in significant ways is what continues to set high-performance organizations—in either the public or private sector—apart as a magnet for 21st century talent. 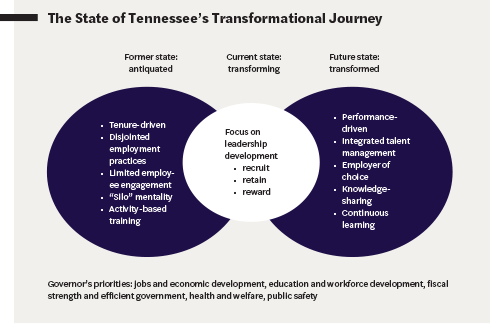 About the Author
Holly Burkett

She recently wrote the “Talent Manager as Change Agents” chapter in ATD’s Talent Management Handbook and was a contributor to the Human Resource Certification Institute’s (HRCI’s) The Rise of HR: Wisdom From 73 Thought Leaders, an e-book distributed to more than 1.5 million HR professionals around the globe.

Holly holds a doctorate in human capital development, along with a master’s of human resources and organizational development, and is a frequent conference presenter, international facilitator, and writer.

About the Author
Trish Holliday