The coaching profession is flourishing, and the future looks even brighter. During the past five years, the internal coaching market has grown rapidly, according to the International Coach Federation's (ICF) 2012 ICF Global Coaching Study.

The study, commissioned by ICF and conducted by PricewaterhouseCoopers, is the second of the profession's kind, following its first global industry study in 2006. The 2012 study reached professional coaches in 117 countries, with 7,700 ICF members responding to the survey. Of the 12,133 valid responses received, 4,400 were from non-ICF members.

According to ICF President Janet Harvey, "The picture was even better than we had hoped for, considering that during the five years between studies, the world suffered the greatest recession since the Great Depression."

The study resulted in these main findings:

Regarding this last finding, Harvey notes that practitioner coaches recognize it is their responsibility to build client awareness of coaching's distinction as a practice. "Just because you've been a trainer doesn't mean you'll be a good coach," she says. "This is an opportunity for the training field in general to help people see the value of investing in coaching."
Harvey points out that ICF's code of ethics, code of conduct, and bylaws—available on the organization's website—define the standards by which professional coaches model their behavior. 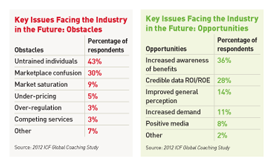 About the Author
Ann Parker, APTD

Community of Practice Manager, ATD  Ann Parker is senior manager of the Human Capital Community of Practice and the Senior Leaders & Executives Community of Practice at ATD. Prior to this position, she worked at ATD for five years in an editorial capacity, primarily for TD magazine, and most recently as a senior writer and editor. In this role, Ann had the privilege to talk to many training and development practitioners, hear from a variety of prominent industry thought leaders, and develop a rich understanding of the profession's content.