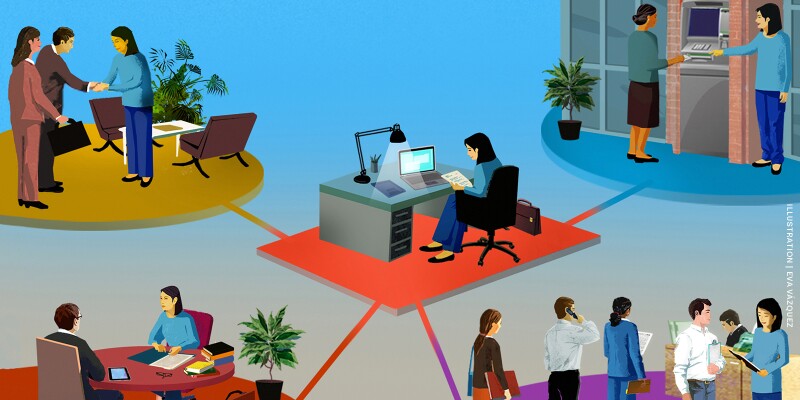 Encouraging Behavior Change on the Job

State-of-the-art training and professional development programs often revolve around sleek technology and incorporate the latest theories on adult learning and instructional design. But if nothing happens after the training program concludes, employees will likely forget what they learned and fall back into old habits. Even simple reminders, delivered via short but frequent training sessions or regular self-assessments, can make a big difference. Three companies, whose winning programs are designed for workers in customer-and client-facing roles, invested as much thought and care into what happens after training as they did into the training itself.

In a new performance enhancement program for its private bankers, the Bank of China focused on sustaining several key behavior changes. The program helps private bankers shift from a product-oriented mindset to a more customer-centric one, and there were three general behaviors that bankers needed to incorporate into their daily work to make that happen: actively requesting referrals from loyal customers, asking the right questions to understand customers' needs, and exploring customers' full financial history to help them find the right banking solutions.

The program components included a pre-training self-assessment and a two-day private banker simulation workshop. Immediately after the workshop, the training team asked employees to commit to what it called "go-dos"—actions that workers would take on the job to apply the concepts from the workshop.

One go-do, for example, was "Select two clients who you will contact in the near future. Think about the right timing, then ask them to make a referral with the appropriate approach." Another was "Use the life-span question tool to ask about selected clients' life targets and upcoming life changes and then offer appropriate recommendations."

"A digital tracking system was applied to track the ‘go-do' status every two weeks, and post-program coaching calls were provided to encourage trainees to execute the actions," explains Wang Ying, senior L&D manager for the Bank of China.

In addition to the life-span questioning tool, which helped private bankers explore clients' deeper financial needs, the training team also created a best-practice handbook, compiled from the private bankers' real post-training experiences. In the group coaching sessions, trainees shared their go-do actions and the results, and the training team compiled success cases in the handbook. The combination of practical tools, post-training action plans, and the opportunity for reflection and discussion around those action plans led to lasting behavior change among the company's private bankers.

When Melco Resorts & Entertainment, which owns and operates luxury resorts in Asia and Europe, implemented a training program for hotel staffers at a new five-star property called Morpheus, it also focused largely on sustaining service behaviors through post-training actions. Knowing that "people don't do what you expect but what you inspect," the talent development team created post-training measures of success, including role-play evaluations, coaching appointments, a mystery shopper program, and formal feedback from employees' managers. It also conducted daily briefings with workers that recapped key points from the training program.

"It was instrumental that we did not only set vision and brand service expectations but also created systems in place where we could inspect and track to ensure the Morpheus brand service excellence is achieved," says Akiko Takahashi, executive vice president and chief of staff to Melco's chairman and CEO.

Employees' managers were also instrumental in reinforcing service behavior. They were involved in daily briefings and role-play evaluations and provided regular feedback on workers' performance relative to the training they received. They became aware of their direct reports' strengths and areas for improvement.

After program implementation and a completed series of post-training evaluations, more than 90 percent of employees were performing at the highest competency level required for the Morpheus service brand. Other success markers include accolades that Morpheus has received. Within months of opening, Time magazine designated Morpheus as one of the World's 100 Greatest Places. And within a year of opening, Forbes Travel Guide awarded it a five-star rating.

In a new training program for its frontline customer service representatives, multinational bank Garanti BBVA built content around the understanding that the reps would have ongoing learning needs and would need to access training materials continuously. So, instead of classroom training, the learning team designed a series of microlearning videos for each business line. The learning team assigns videos to each customer service rep via the company's learning management system. After reps complete the initial training, they can access the materials if and when they need them.

The microlearning approach to designing the videos has increased completion rates for internal training. It also allows for making relatively easy updates to the content to reflect the bank's evolving business needs.

"Video scenarios are written with the cooperation of the directorate of education and each business line, with case studies collected from customer representatives," notes Esin Öner, senior supervisor of learning strategies.

Because the video scenarios feature learners' own colleagues, they are highly relevant and applicable. The scenarios show mistakes and negative experiences, which employees have said are helpful. Overall, the video content has received positive feedback from staff.

Perhaps one of the most engaging elements of the training program are quizzes that are embedded in the videos. One, known as QuizGame, is an innovative gamified quiz application. Another, called NextPlease, is an artificial intelligence-based sales game that helps customer service reps make better connections with customers. Both quizzes require reps to actively apply what they've learned in the short training videos, decreasing their chances of forgetting the materials.

Six months after customer service reps complete the initial training, they submit a self-evaluation of their performance. Their managers also complete a questionnaire about their performance. Results have shown that sales numbers and reps' knowledge of their products have increased by 14 percent on average.

View the entire list of 2022 Excellence in Practice Award winners.

About the Author
Stephanie Castellano

Stephanie Castellano is a former writer/editor for the Association for Talent Development (ATD). She is now a freelance writer based in Alexandria, Virginia.