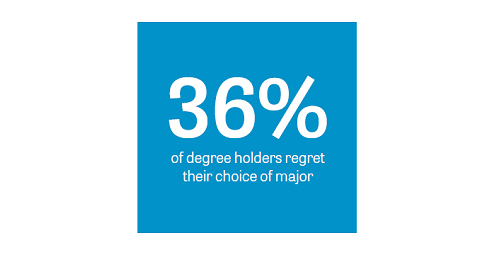 Half of Americans Regret Their Higher Ed Decisions

According to ATD Research's 2016 State of the Industry report, about 11 percent of the average training budget was allocated to tuition reimbursement in 2015. Considering that, counseling employees who are continuing their higher education can be an important part of your job in talent development. And while it is critical to encourage employees to enroll in programs that will benefit your organization, it's equally important to steer them away from choices they will regret.

That might be more difficult than it sounds. According to a June 2017 report from Gallup and Strada Education Network, 51 percent of Americans would change at least one of their education decisions if they could.

More than one-third of people—36 percent of the report's 89,492 respondents—would replace their field of study. That holds especially true for those who obtained bachelor's degrees in anything other than STEM (science, technology, engineering, and mathematics) fields. In fact, while only 28 percent of bachelor's degree holders with a STEM focus would change their field of study, 48 percent of people possessing a liberal arts degree, 41 percent possessing a degree in public service, and 40 percent possessing a degree in business would elect to do so.

On the other hand, only 12 percent of people would change the level of degree they hold. Associate's degree holders were most likely to express this sentiment: 23 percent said they would obtain a different degree given the opportunity. Meanwhile, holders of bachelor's and post-graduate degrees felt the most confidence in their degrees—only 7 percent of either group would elect to pursue a different level of degree.