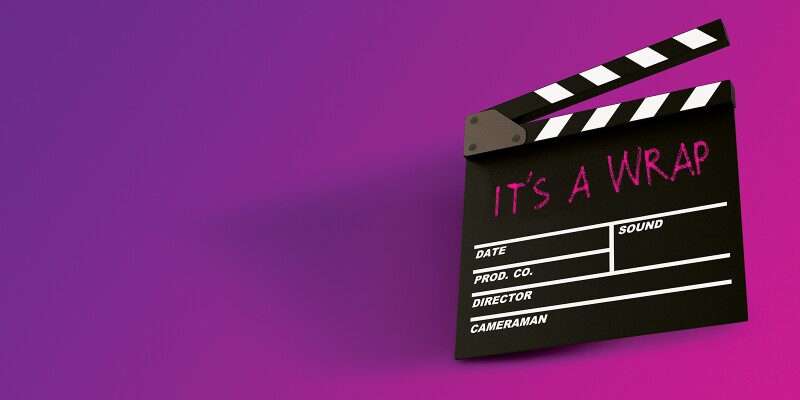 Imagine this: You have had a great training session. Participants showed enthusiasm for the topic; they asked questions that demonstrate they were digesting the tools and strategies; and during the practice sessions, they were able to successfully put their new skills to work.

Now it's time to wrap up the training. You want to close in a meaningful way. You want the close to be engaging, yet at the same time, you want to make sure that what participants learned will translate from the classroom to the workplace. How do you do it?

Consider any of the following five wrap-up strategies. Each one has a slightly different purpose, so you'll want to select the strategy that best serves your objective.

The purpose of this 25-minute activity is to encourage commitment to action by having participants write a letter to themselves that states their intent to take a specific action.

Research shows that when a learner commits in writing to take an action post-training and then shares that commitment with another person, the likelihood of the learner taking that action increases significantly. Explain to participants that you would like to harness this power of intention by having them do just that.

Begin by reviewing the key tools from your course and asking participants to pick one that they will commit to using in the next 30 days to ensure that they and their organizations benefit from the class.

Next, explain the letter-writing activity's purpose and offer participants these writing prompts:

Allot five minutes for learners to respond to one or more of the prompts, and instruct each person to include their name and email address on their letter. Next, collect the letters before participants leave.

This closing strategy is as effective virtually as it is in a face-to-face classroom environment. Simply ask participants to send you their letters via email.

Three to four months after the workshop, email participants their respective letters, asking them to write back about what they did.

In my experience using this exercise, I have found that when some of the participants receive their future letter, they are surprised at how much they have implemented what they promised to do. For others, however, the future letter is a kick-in-the-pants reminder to begin putting into practice what they had learned during the training program.

Additional execution pointer: As an option, before collecting the letters, ask participants to share them with either a partner or a small group to further reinforce the commitment they have made.

The purpose of this activity is to close a session on a high, positive note by giving participants the opportunity to express appreciation for others in front of the entire group. In turn, recipients of the acknowledgments will learn what they bring to the group.

Begin by asking everyone to pick out one person whose contributions during the workshop they greatly appreciated. Allot 30 seconds for participants to reflect on the training session, offering these prompts:

To keep the focus on your learners, make it clear that you are disqualified from receiving acknowledgment during the activity. Announce that participants should avoid saying, "I want to appreciate Sarah because she …" Instead, they should talk directly to the person, because the feedback tends to be much more powerful that way. For example, they should state "Sarah, I want to appreciate you for …"

When participants are ready, simply start with one person and go around the room until all participants have expressed their appreciation. For a group of 16 participants, allot about 15 minutes for this activity: a two-minute introduction, one minute for individuals to jot down a note, 10 minutes for sharing, and a two-minute wrap-up.

I have found that the appreciations activity can have a powerful impact on groups, regardless of whether I am working with a team of executives or a group of line workers. Appreciations give people insights into how others see them, an often rare opportunity in today's workplaces.

Although this activity can be effective in virtual training environments, the impact is significantly stronger in a face-to-face session due to the emotional connections that are easier for participants to make in person.

Additional execution pointers: Even though you will be hearing everyone's views, it may be helpful to the group to start with someone who—based on their participation and interactions during the class—you believe will readily have a response and be fairly positive in their reactions. This will allow the activity to begin with a useful example.

Likewise, remind the group that it is not important that everyone gets appreciated. Rather, the exercise is for each participant to have an opportunity to show appreciation.

The purpose of this activity is to promote deeper discussion and listening. During this time, participants may say something about what the time spent in training has meant to them, share their expectations for the future, or disclose any other thoughts regarding what they've learned and their experience throughout the course.

For a group of 16, this activity can take 30–60 minutes. To begin, stand in the center of the room with a talking stick in hand and ask the group to form a circle around you. If you don't have a stick, consider any other item that can serve as a ceremonial object. I have used a stone and even a coin at times.

The person can speak for as long as he wants and, once finished, holds the talking stick out to offer it to anyone who wants to speak next. Whoever chooses then comes to the center of the circle to take the stick, and the previous speaker rejoins the circle. This continues until no one else wants to speak. I find that the true power in this exercise is that it slows down the conversation and enables people, sometimes for the first time, to feel truly heard.

If you run into a situation in which a participant speaks for too long—which technically is allowed, given the rules—respect that person's discourse. As the allotted time range demonstrates, this activity can vary widely in the time needed based on how much participants have to say.

Additional execution pointers: During a break or at some other time in advance, ask someone to serve as the first person for this exercise. Consider picking someone who has been both positive and readily expressive during the workshop. Explain to that person the same instructions you will give to the whole group so that the person will be prepared to speak.

Although trainers frequently use this activity as a closing exercise, they also can use it at any time when the group may benefit from slowing down the conversation (for example, when tension is high or when people are frequently interrupting one another).

The purpose of this activity is to give participants an opportunity to briefly share their thoughts or feelings at the end of the session—the operative word being briefly. It is especially helpful when you have little time to close. This exercise should take only about six to eight minutes for a group of 16: a two-minute introduction, three to five minutes of sharing (10-15 seconds per participant), and a one-minute wrap-up.

Before the activity, develop a question that learners can answer in just a couple of words, such as: As we close the session, what one to three words describe how you are feeling right now? After you've asked the question, name the learner who will start the activity and then give participants some time to determine their answers.

Emphasize that the activity will move quickly, so learners should be prepared to share their answer when it's their turn. To ensure everyone is ready, ask each person to give you a signal, such as a head nod, to indicate that they have their response.

Look around the room at each person. Once everyone has given you a head nod, instruct the first person to begin and then everyone else should subsequently reveal their response one at a time, moving clockwise around the room. There is no need to record the comments shared, because it will slow down the group.

I find this closing activity to be quite insightful. With the words people choose, I can quickly learn who believes they are getting value from the workshop and whom I may need to have a conversation with afterward to make sure I am addressing their need.

Additional execution pointers: As with the aforementioned activities, start with someone who will readily have a response and who tends to be fairly positive in their interactions. Also keep in mind that this exercise works well with virtual participants.

Along with being a good closing exercise, you can also use the whip activity at any time to take a temperature check of the group.

The purpose of this activity is for participants to develop a brief statement that summarizes the results of a session or other information. When learners leave the training, people will likely ask them, "How was the class?" This is participants' opportunity to craft their responses. An elevator speech is presented in the time it takes an elevator to go from a building's first floor to the top floor—about 30 seconds. The elevator speech should grab attention and deliver the key points in few words.

To begin, display on a flipchart the O WOW format to help participants generate their statements' key points.

Emphasize that the elevator speech should do two things in particular: inform and excite. In this case, learners should inform by telling people what happened during the training course and excite by communicating what most excites them about it.

It always amazes me how much people get into creating and sharing their elevator pitches. Often, more than one person from a small group insists on sharing their pitch with the whole class. There's something about the simple format that provides the minimum structure needed to spark creativity.

Additional execution pointers: As an alternative to small groups, you can ask every participant, one at a time, to stand in front of the group to give their elevator speech. To keep the energy up, be sure to have the group clap after each participant shares a statement.

In addition, you can effectively execute this exercise in a virtual classroom.

How you close a training session is almost as important as how you open it. Your closing can often determine how much of your teaching is applied and how many of your learners apply it. During your upcoming courses, consider trying one or more of these strategies to multiply your impact even more.

About the Author
Michael Wilkinson