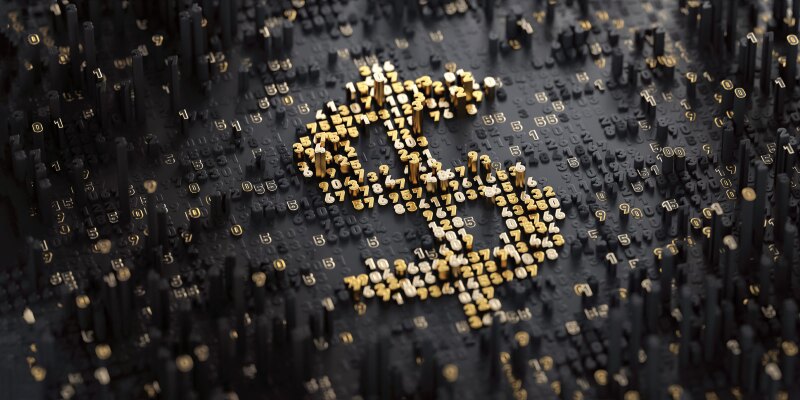 Learning Investment and Hours Are on the Rise

Organizations continued to make healthy investments in employee learning in 2016, according to the Association for Talent Development. Its 2017 State of the Industry report, sponsored by LinkedIn Learning and Study.com, found that organizations spent $1,273 per employee in 2016 on direct learning expenditure compared with $1,252 in 2015.

Confirming organizations' commitment to learning, the average number of formal learning hours (which are standalone hours that are not embedded in work activities) used per employee also grew, reaching 34.1 hours in 2016, up from 33.5 hours in 2015. In fact, this is the fourth year in a row that has seen an increase in both the direct learning expenditure and the number of learning hours per employee.

Because formal learning hours do not capture time spent learning while working, ATD also provides a picture of on-the-job learning, which can happen during activities such as employee knowledge sharing, coaching by peers and managers, stretch assignments, job shadowing, and rotational training. ATD found that, for around two-thirds of organizations, on-the-job learning is a key priority.

A closer look at learning spending

The average direct learning expenditure per employee of $1,273 in 2016 represents a 1.8 percent increase from 2015. To provide some context for that figure, in 2016, the average inflation rate for advanced economies calculated by the International Monetary Fund (IMF) was 0.8 percent, so growth in learning spending outpaced inflation. More than 80 percent of the 299 organizations that submitted data for the State of the Industry are headquartered in advanced economies. 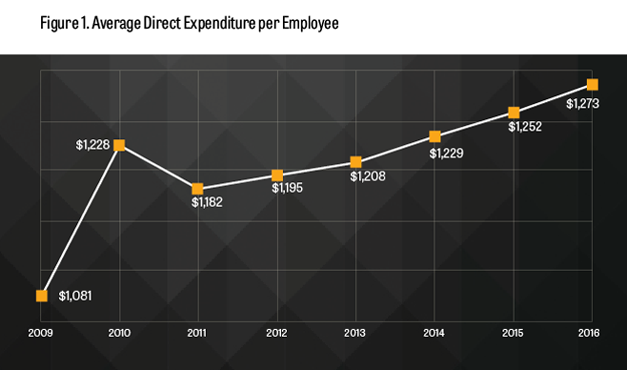 In 2016, 61 percent of direct learning expenditure was directed toward internal costs. Just over a quarter (26 percent) went to external services. The remaining 13 percent went to tuition reimbursement. 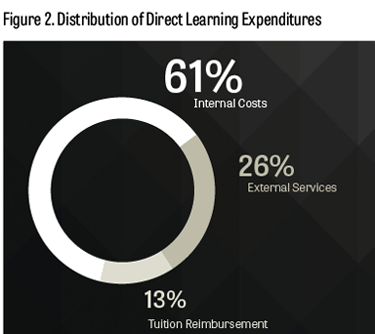 Looking closely at the efficiencies and expenditures data also reveals that economies of scale are at work in the market for learning. Larger employers often can offer a program at a lower cost per person because they can spread out the development and delivery costs over more participants. The data reflect that: Small organizations with fewer than 500 workers spent, on average, $2,016 per employee on learning, whereas midsize organizations with 500 to 9,999 employees spent $973 and large organizations with at least 10,000 workers spent $673. Despite having the lowest average per-employee expenditure by far, large organizations saw their employees use more learning hours, on average, than workers at midsize and small organizations.

Differences also can be seen across industry groupings. In the latest State of the Industry, ATD provides benchmarks for four such groupings: finance, insurance, and real estate (FIRE); healthcare and pharmaceutical; management consulting; and manufacturing. Employees in some industries require more costly training than employees in others, or the knowledge they need evolves rapidly, necessitating changes and additions to learning content. Illustrating that, management consulting firms spent, on average, $1,967 per employee on direct learning expenditure. Their employees may require specialized knowledge, and these firms often are small or midsize.

At the other end of the spectrum, the average direct learning expenditure for manufacturers was $461. Manufacturers often are large, their content may not need to be specialized or updated frequently, and these companies are more likely to be headquartered in or have operations in emerging market and developing economies (where the costs of goods and services and salaries are lower). FIRE companies spent $964 per employee, on average, in 2016, and healthcare and pharmaceutical organizations spent $916.

However, the cost per learning hour used is only $80, which is slightly down from $82 in 2015 and $84 in 2014, showing that learning programs are being distributed efficiently across workforces. (If a one-hour class was offered twice a year and five employees took the class each time, then one hour was available, but 10 hours were used.) Confirming that efficiency, the average reuse ratio, or the number of learning hours used per hour available, rose to 51.1, the highest it has been since 2011.

Manager development is a priority

The three content areas with the largest share of the learning portfolio in 2016 were managerial and supervisory (14 percent), mandatory and compliance (11 percent), and processes, procedures, and business practices (10 percent). Together, these areas made up 35 percent of the portfolio of learning programs (see Figure 3). Those also were the top three areas in 2015. 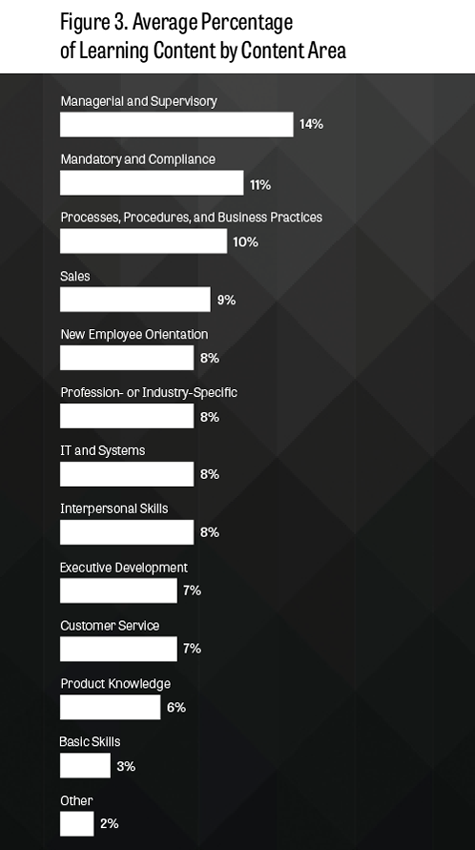 Managerial and supervisory content likely will continue its hold on the top spot; a poll of talent development executives conducted by ATD's researchers in mid-2017 for the quarterly Talent Development Executive Confidence Index found that 43 percent expected funding for frontline manager development to grow in the next six months, and another 48 percent expected it to hold steady.

Traditional, instructor-led, face-to-face classroom was still the delivery mechanism for 49 percent of learning hours used in 2016. However, thanks to the increasing importance of technology in delivering learning, that number has drifted downward during the past few years; five years earlier, in 2011, it was 10 percentage points higher at 59 percent.

Last year, 45 percent of learning hours used at the average organization were delivered via technology-based methods, up from 41 percent in 2015. In 2011, that figure was 38 percent. Technology-based learning can be delivered through online or satellite classrooms, self-paced online or non-networked computer-based methods, mobile devices, or non-computer technology (such as DVDs). Over the years, technological access and know-how on the part of both learners and designers have grown by leaps and bounds. Furthermore, the user-friendliness, flexibility, and variety of learning technologies have improved dramatically.

Self-paced online delivery (e-learning) was the most used technology-based method in 2016, and consumption has grown from the previous year. In the research report Next Generation E-learning: Skills and Strategies, ATD and the Institute for Corporate Productivity found that 88 percent of organizations use e-learning, and many of those companies are making more of their learning programs available as e-learning, either exclusively or as an option.

A snapshot of on-the-job learning

The formal learning hours described in this report only account for standalone learning occurring separately from job activities. However, at many organizations, learning experiences that happen during work are critical to employee development, so it is important for any comprehensive benchmarking report to capture an accurate picture of on-the-job learning.

Because this type of learning is inherently difficult to measure in hours, ATD asked participating organizations to assess their commitment in 2016 to on-the-job learning (defined as any learning that is not a standalone activity and is intertwined with work activities). ATD began including these questions in the State of the Industry survey last year. Overall, 65 percent of organizations emphasized on-the-job learning to a high or very high extent. In 2015, 67 percent placed a large emphasis on it. In both years, a miniscule 3 percent placed no emphasis at all on it.

On-the-job learning can take many forms. More than half of organizations used employee knowledge sharing on the job (in person) to a high or very high extent, but only 31 percent said the same about employee knowledge sharing using technology (such as social media or collaboration platforms). Nearly half relied extensively on on-the-job coaching by managers; the same is true of coaching by peers. However, only 31 percent used job shadowing (which allows the employee to observe or shadow another employee's work) and 17 percent heavily used rotational programs (where the employee moves through different parts of a company or different job roles).

Who was surveyed and how the survey was conducted

The target survey population was organizations of various sizes and industries. ATD distributed a link to an online survey to the target population in June 2017. The survey closed in August.

A total of 299 unique organizations submitted data for fiscal or calendar year 2016. All organization-level data are confidential; responses are aggregated and only summary statistics across groups are reported.

Download the 2017 State of the Industry report after December 8 at www.td.org/SOIR2017 or in the free ATD Publications app.

A Word About Benchmarking

The data presented in the State of the Industry report and this article will aid readers in benchmarking their own organizations’ learning expenditures and activities against those of other organizations. To make benchmarking comparisons more meaningful, readers should review the data by industry and workforce size groupings when possible.

However, readers should be aware that all figures reported here and in the report are averages across groups, and the circumstances faced by their own organizations may be vastly different from those facing the average participating organization, or even the average organization in their industry. Therefore, organizations should not aim to replicate the numbers provided, but rather use the data as a benchmark so they can better understand their own learning expenditures and activities, as well as those of their peers.

About the Author
Maria Ho

Maria Ho is the manager of ATD research services. She serves as ATD's senior research program strategist and designer and provides oversight and direction for all of ATD's internal and external, industry specific, and market research services. Prior to joining ATD, Maria was a public policy researcher, data analyst, and writer at the Pew Charitable Trusts in Washington, D.C.

3 Comments
Sign In to Post a Comment
Sign In
DB
Deb Bone
February 27, 2020 02:59 PM
Is there an industry (financial) standard number of trainers to employees. I found something old that states about 15 trainers per 1000 employees.
Sorry! Something went wrong on our end. Please try again later.

Matthew Eade
July 13, 2018 12:06 PM
Are formal learning hours averaged out per month or year?
Sorry! Something went wrong on our end. Please try again later.
JC
Justin Clark
February 02, 2018 12:22 PM
Does anyone know if average formal learning hours per employee include hours spent on ILT onboarding training? I see it included in the the graphic of Figure 3, but want to make sure I'm comparing apples to apples when I look at these numbers for perspective.