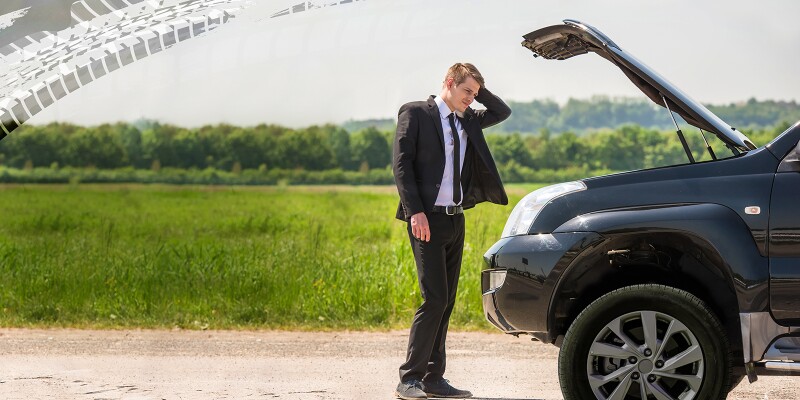 Leaders who transitioned into their roles during the pandemic didn't receive adequate training and support. What now?

There's no way around it—transitioning into a leadership role at any level is stressful. But when taking on a new leadership role without much training or warning, stressful transitions become an even larger problem.

Before the pandemic, many leaders were left to figure out their new leadership roles as they worked. That only amplified during the pandemic, which is perhaps one of the most stressful times in modern history. According to DDI's Leadership Transitions Report 2021, these leaders were thrown into the deep end with significantly less training and support than others who stepped into similar roles before the pandemic. They risk creating a "lost generation" of leaders who now need additional support to get up to speed with others in the organization.

The report includes responses from more than 15,000 leaders and 2,000-plus HR professionals from around the world. The results indicate that the events during the past 20 months have affected leaders across all levels and industries. And yet many were left without the support to be successful.

That lack of support may have resulted from companies' needs to quickly downsize, upsize, transform, or reorganize and their rush to fill leadership positions. But as businesses worked with speed, the research reveals that they didn't give those leaders the same experience that they normally would have given transitioning leaders. For example, leaders who reported transitioning right before or during the pandemic were less likely to receive leadership skills training, assessment, and 360-degree feedback.

Struggling with no support

There's always going to be stress and challenges associated with transitioning into a leadership position. In fact, about half of new leaders in a previous study reported it was one of the most stressful challenges they've ever encountered. When asked to compare their transitions to other life challenges, newly promoted leaders rated it as more stressful than divorce, raising teenagers, or a death in the family.

In the current report, more than one-third of leaders described their transitions into their current role as overwhelming or very stressful. About 5 percent had frequent thoughts of quitting. High-stress transitions also set leaders up for burnout down the line. The study found that 37 percent of leaders who faced stressful transitions said they felt used up at the end of each day. Only 11 percent of their peers who experienced low-stress transitions felt the same way.

When individuals don't have support during their leadership transition, not only do they have to deal with high stress levels, but employers also face several risks. For example, those employees are at higher risk of leaving the organization, which can create a retention issue and can also result in costly searches to replace the leaders.

Leaders who slog through without proper development opportunities can keep falling behind, creating bigger development gaps that will only grow as their tenure continues. In a worst-case scenario, as an underdeveloped leader moves into senior executive and C-level roles, their skills gap could reverberate across the organization.

So, what's the big risk associated with a lost generation of leaders? If those individuals don't receive the support they need soon, they could continue to be disengaged and struggle for the foreseeable future.

The essential tools these leaders need

The report found that 45 percent of leaders with stressful transitions rated themselves as average or below average leaders. That's compared to the 16 percent of leaders who gave themselves the same rating but went through low-stress transitions. With these individuals posing such a risk to their organizations' long-term well-being, it's important to focus on getting them back on track. But what do they need?

A clear, well-defined picture of what success looks like. More importantly, they need to know how to be successful. Achieve that through well-defined competencies, realistic short- and long-term goals, and clear expectations of what they need to achieve.

Knowledge of their strengths and areas for improvement to focus their development efforts. Provide leaders with high-quality assessments. When they undergo assessments, objective data can help them understand and guide their development. It also helps ensure they receive development opportunities that meet their exact needs and don't waste their time.

An understanding of how their behaviors affect their performance. Leaders can get that understanding through focused feedback and coaching, which not only show them behavioral impacts but also help them understand where they can improve.

Development opportunities—now. The most important thing leaders who went through a stressful transition need is timely, targeted, high-quality development as soon as possible. Leaders should get such opportunities early in their transitional period, because it's more likely their stress will increase the longer they wait.

Confidence. When leaders go through stressful transitions, their self-confidence in their effectiveness drops. So, they need as many development opportunities as possible to ensure they can rebuild their confidence.

Skills to help them navigate the company. The report reveals that some people who were new to leadership or an organization were least confident in navigating organizational politics, making the right hiring decisions, and helping team members avoid burnout. They also worried about gaining stakeholder support and coaching employees with performance problems.

Leaders need each of those if they hope to rebuild or gain the confidence to succeed. The report found those areas were critical for retaining leaders. In fact, 11 percent of leaders who transitioned before or during the pandemic said they were more likely to leave their organization—and they intended to do so within the next year. 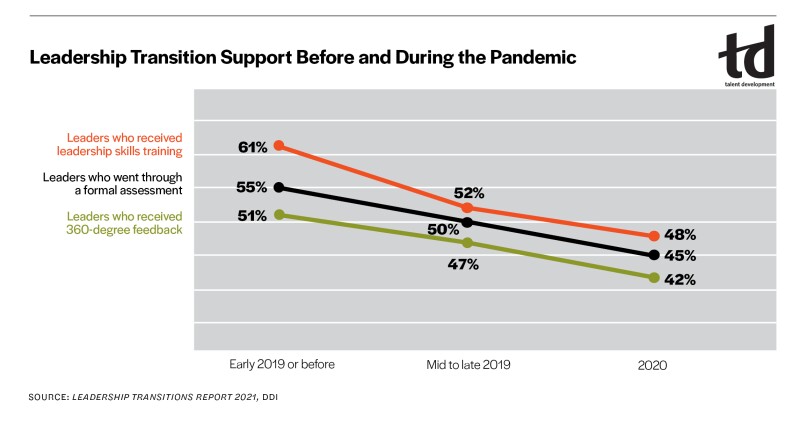 Along with being thrown into a leadership role with little to no transition period, leaders facing longer transitions also face problems. According to the report, leaders take about three months to transition into their roles. When they took three months or less to transition, 66 percent felt accountable for being an effective leader. During that period, 55 percent said they felt engaged with their role, while 51 percent found their job to be full of meaning and purpose.

But as time went on, those numbers dramatically decreased. Among leaders who took 12 months or more to transition into their position, 57 percent felt accountable for being an effective leader. During that period, 42 percent said they felt engaged with their role, while 37 percent found their job to be full of meaning and purpose.

Unfortunately, during the pandemic, a lot of leaders in transition may not have been able to do so in a timely manner. Many took longer to transition into their roles out of necessity. The pandemic forced them to put their development on hold to radically change the way their business functioned and how teams worked. But leaders can have their transitional period accelerated with the following strategies.

Undergo quality assessment to identify strengths and skills gaps. Leaders may not be as self-aware as they think, so objective data can help them better understand their own needs.

Receive coaching from leaders on their transition. They're going to need to understand more than just what to do in their leadership role. They will also require help to build their skills and practice them, and a coach is one of the best ways to do that.

Get clear and realistic performance expectations. Leaders need to know what they're getting themselves into, and having expectations in place helps them more quickly understand. It also helps them learn what to expect going forward. By knowing the behaviors and skills they need to possess, transitioning leaders should have an idea of how to respond in certain situations, thus giving them a better understanding of what to expect in their new roles.

Those basic concepts may not seem that important, but leaders reported that those helped them feel up to speed about a month and a half more quickly than the average speed of transitions. 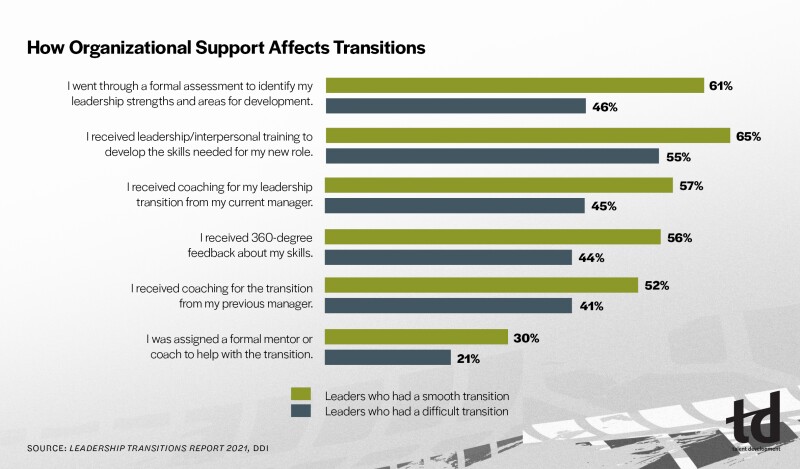 Why the lost generation matters

The problems facing the pandemic-era generation of leaders won't just go away. In fact, in some cases, these leaders' downfall began almost as soon as they transitioned into their new positions. As they struggle, they form long-term effectiveness issues and habits that are difficult to break, despite additional development opportunities.

It's easy for companies to focus on moving their business past the pandemic while overlooking their leaders' immediate needs. But if that happens, those individuals will continue to struggle silently for fear of showing weakness. Instead, they'll work to soldier through and continue developing a long-term lack of confidence in their abilities.

Worse, stress and a lack of confidence are two large contributors to burnout, which is running rampant through workplaces, according to the Global Leadership Forecast 2021. About 60 percent of leaders say they feel used up at the end of every workday, indicating they are feeling burnout.

Along with confidence issues, stress causes transitioning leaders to feel less engaged in their role, especially as long transitions drag on. They also felt less accountable for being an effective leader. They reported that they found a lack of meaning and purpose in their work.

It could cause an even bigger impact by weakening the organization's future of leadership prospects. Global Leadership Forecast 2021 reveals that, prior to the pandemic, only 11 percent of HR professionals believed they had a strong enough bench to fill leadership roles. That marks the lowest bench strength in the past decade.

Further, the study reports that the top concern for 55 percent of CEOs is developing the next generation of leaders. It also found that 52 percent of CEOs are most worried about attracting and retaining top talent.

If CEOs want to address talent needs, companies must prioritize leadership development and assessments as part of the leadership transition to create a stronger bench. According to the Leadership Transition Report, 28 percent of employers with high-quality leadership programs have a strong leadership bench. When organizations combined high-quality development and assessment, researchers found nearly 40 percent of them had a strong leadership bench ready to fill critical roles. That process enables employers to proactively create a strong pipeline to fill leadership roles when the need arises.

Organizations that don't address the lost generation of leaders risk creating an even weaker bench. That will create a large gap of leaders who have never recovered from a poor transition, which may cause a complete leadership collapse.

Companies need to take a moment to reflect on the past nearly two years and learn from it, especially when thinking about leadership. Teams rely on their leaders for guidance during times of uncertainty. But without training and support, poor leadership habits will become normalized to these leaders and will be extremely difficult to break.

Employers that expect leaders to keep learning as they go are setting themselves up for long-term consequences. But businesses that take the time to go back and provide leaders who dealt with stressful, rushed transitions with high-quality development will be setting them and their teams up for success.

About the Author
Stephanie Neal

Stephanie Neal, MA, leads DDI’s Center for Analytics and Behavioral Research (CABER) where she and her team manage strategic market research and trend studies on leadership in the workplace.
With more than 15 years of experience working with companies to define and address critical business challenges, Neal blends both an in-depth analytical and creative approach to help companies better inform their decisions and improve people and business outcomes.
Neal is co-author of several industry-leading research reports, including Women as Mentors: Does She or Doesn't She? A Global Study of Businesswomen and Mentoring and DDI's Global Leadership Forecast, a major trend research study providing deep and actionable insights on how organizations can optimize their management of leadership talent in alignment with strategic priorities.

About the Author
Rosey Rhyne

Rosey Rhyne is a senior research manager on DDI’s Center for Analytics and Behavioral Research team.