Please Boss Me Around

Micromanaging may have fallen completely out of fashion, because many employees hardly see their bosses now that a time-consuming recession has hit. According to a recent Leadership IQ study, 66 percent of employees report that they have little to no interaction with their bosses, up 13 percent from last year's report. 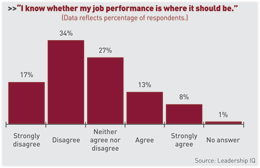 Although 67 percent of workers reported that they get too little positive feedback, they're not just after words of recognition. Another 51 percent of employees said th