Post-Recession Salaries Are Slow to Recover for Some Nations 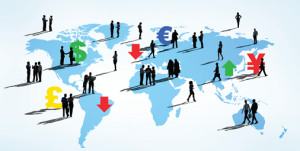 The Great Recession's effect on global paychecks is mixed.

The recession that began at the end of 2007 had global implications. Nine years later, salaries around the world are on the upswing—but the United States had the worst recovery percentage among developed nations, according to research by the Hay Group division of Korn Ferry.

In fact, salaries in the United States decreased 3.1 percent on average since September 2008, adjusted for inflation, even as the country's gross domes