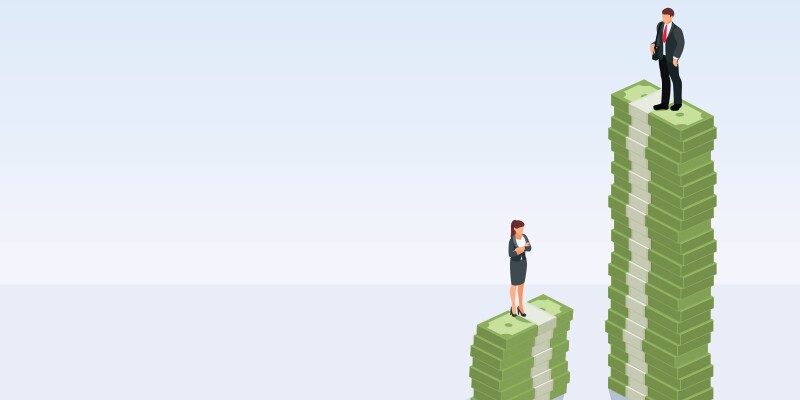 Show Me the Money

Women are less likely than men to negotiate for better salary and benefits. Let’s change that.

You have probably heard that, in the United States, women make only about 80 cents for every dollar that men make. According to the Institute for Women's Policy Research, at this rate, it will take 42 years for white women to reach pay equity, 107 years for black women, and Hispanic women may have to wait 230 years to receive equal pay for equal work.

Reaching pay equity is a hot topic, and there are many reasons why women aren't paid equally: They tend to be primary caretakers of their families, which means their careers may take a back seat to their spouses' careers, and they may take extended leave when their children are young, which affects their work history; they also may choose careers with lower salaries, and future employers, therefore, may offer them lower salaries based on their previous or current wages. In addition, there are implicit and explicit biases that hold women back, which create gender-based wage disparities, ultimately affecting their roles, careers, and compensation.

Some of these issues may be out of their control, and my focus for this article is on the one thing women can control: negotiating salary and benefits. A 2014 Harvard Business Review study found that only 7 percent of women negotiate salary compared with 57 percent of men. The study found the same results as a 10-year-old study by Linda Babcock, professor of economics at Carnegie Mellon University, which indicates that women are not making progress when it comes to closing the salary gap.

The main way to close the wage gap is for women to ask for what they want. Over a 40-year career, the pay gap between men and women adds up to an average of $430,480. By not negotiating, women not only lose hundreds of thousands of dollars in salary, but it's even greater when they factor in how their compensation affects their pension, Social Security benefits, and retirement plans (e.g., 401(k) plans).

When I began my career a few decades ago, no one discussed negotiating. So, being uninformed, I didn't negotiate for my first three jobs. The pivotal point for me was when I had worked at AT&T for 10 years, and HR asked me to take on an additional role of managing a team whose manager was fired unexpectedly. I tried to ask for more money but didn't fully understand the process or how to remove my emotions when asking.

One day, I shared my frustrations with two colleagues by saying, "They don't pay me enough to do two jobs" and quickly learned that I was being paid $15,000 less per year than they were. More notably, they had no direct reports, and I was managing two teams comprising 37 employees. When I asked my vice president to compensate me fairly, her response was that I would never make what they were because "They had more time in their positions." I was stunned and tried to counter her argument but was unsuccessful.

It was then I realized I had made a big mistake in not negotiating 10 years earlier. Even my close friend in HR who initially offered me the position told me that they had expected me to negotiate—probably even more so because I had just graduated with a master's degree. I had attended two great universities and visited their career centers many times—but, again, no one ever mentioned negotiating an offer.

So, I decided that I had two choices: Be a victim of my circumstances or learn how to negotiate for future offers. I chose the latter by reading everything I could about negotiating, making a vow to myself to negotiate every offer every time, and teaching others how to negotiate.

A 2015 Robert Half survey found that employees would rather clean house, look for a new job, get a root canal, or be audited by the IRS than negotiate salary. Let's look at the fears that may be holding women back.

I don't know what to say or how to say it. I don't want to feel awkward or unprepared. It's normal to have these concerns. To deal with them, conduct research online to determine the pay range for the position you're interested in. Look at www.salary.com, www.payscale.com, www.bls.gov, or www.glassdoor.com. Knowing the salary range will provide the data as to where you need to be based on your skills, experiences, and education.

What if they tell me the offer isn't negotiable? At least you tried. If you find out there's no negotiating and you decide to take a lower salary, there are other options. You can ask to have the salary reviewed after 60 or 90 days, especially if you'll have a performance review at this time. You can say, "Assuming that my performance is satisfactory or above at this time, I would like to have my salary increased by X amount." This figure will be based on what you would have negotiated and expected if you had negotiated. Your new manager may appreciate this option, especially if she can budget for it.

What if they rescind the offer because I tried to negotiate? This can happen but most likely it won't unless you're greedy. I recommend asking for only three things—five at the most. Determine the top three benefits that are most important to you, such as payment for certifications, work from home, and salary. Focus on those benefits first.

What if I'm content with the salary? Should I still negotiate and, if so, what will I negotiate? If you are satisfied with the base salary, you can always negotiate a sign-on or annual bonus. Be creative. If you are currently paying temporary health insurance (e.g., COBRA) out of pocket, and the new medical coverage doesn't begin for several months, ask the employer to reimburse you until you have medical coverage.

There are many things you can negotiate, including the start date so that you don't have a break in medical coverage. You can ask for more vacation days—but don't ask for more if you won't use them. Other negotiating possibilities are stock options, company car, mileage, travel, position title, flex-time hours, professional association memberships, and reimbursement for conferences.

During a presentation I recently gave, one of the participants came up to me to share a story. She said that she works in the United Kingdom in a large sales company, and she was speaking with her executives about creating pay equity. They were in favor of it but told her that when making offers to candidates, the men almost always negotiate and the women almost never do. The executives were at a loss as to how to correct this. She asked me for any suggestions.

I paused for a moment and asked if they shared the salary range with the candidates. She said they do, but the women still don't negotiate. I then replied, "I recommend telling all of the female candidates that they should negotiate their offers and that you expect them to do so." She was stunned and said, "You want us to tell them they should negotiate?" When I responded yes, she then said she loved the idea and would do it.

Let's empower all women to negotiate their offers. One day, when all organizations embrace equal pay, negotiating will be unnecessary. But until then, remember to ask, because this is one thing in your control.

About the Author
Marilyn Feldstein

Marilyn A. Feldstein, the founder and president of Career Choices Unlimited, is certified as a Job and Career Transition Coach, a Professional in Human Resources, and an administrator of the Myers-Briggs Type Indicator instrument. She has more than 20 years of experience in all aspects of career management. Marilyn has been active in ATD for many years and served on the Program Advisory Committee for ATD's International Conference & Exposition in 2014 and 2015. Additionally, she has provided career coaching at ATD's International Conference & Exposition for more than five years, and is familiar with the career issues talent development professionals face. Marilyn is a contributor to multiple resume and career books, including Find Your Fit (ATD Press). She also has published articles in TD magazine and is the author of the ATD Infoline “Defining and Leveraging Your Professional Value.” She earned a master’s degree from Penn State University and a bachelor’s degree from the University of South Florida.