Industry-academia collaborations and residential learning centers are raising the tone of India's workforce, at a time when the country is struggling to keep its lion's share of the IT market.

In India, the IT industry is having its day in the sun. The question now is whether it has already reached its zenith.

Full of momentum for years, the industry increased its contribution to the national gross domestic product from 1.2 percent in 1998 to 7.5 percent in 2012, earning $100 billion in revenue in 2012. Business process outsourcing (BPO) has been a particularly lucrative part of the industry. According to Gartner, an IT research firm, Indian companies are increasingly expanding their portfolios to include BPO services. India is now well-established as a "destination of choice" for business outsourcing; in fact, the Indian BPO industry accounts for more than 35 percent of the global BPO market, according to the National Association of Software and Services Companies (NASSCOM).

But certain challenges have caused India's foothold in this market to slip. The Philippines surpassed India to become the number one BPO industry in the world in 2010. And though it's been slowing for a few years, the growth rate of India's top IT services providers was particularly sluggish in 2012.

This is partially due to rising wage inflation and infrastructure and real estate costs. The NASSCOM-Everest India BPO Study predicts that 50 percent of the entry-level talent needed to grow India's BPO industry will have to come from tier two and tier three towns and cities, which are smaller and less developed, but where operating costs are lower. Unfortunately, the local populations are less employable, which creates a major skills gap that India's top companies must bridge.

NASSCOM has claimed that the Indian BPO industry is capable of achieving fivefold growth during the next few years. "Reliance on a cost-savings-driven value proposition alone will not be in the best long-term interest of the BPO industry," the organization explains.

To increase the quality of the BPO workforce, it recommends creating greater linkages between the current education system and the BPO industry. Campus recruiting and training programs are especially encouraged.

"Current and future employees, as well as influencers such as parents of young graduates, form a very critical group of stakeholders for the BPO industry," the 2012 report explains. "Individual providers as well as the industry need to promote the attractiveness of BPO as a career option by highlighting exceptional firm-level initiatives for employee development and facilitating information-exchange forums and mass outreach programs at various colleges."

Observing the titans of the Indian IT world, this seems a bit like preaching to the choir. These leading companies not only work actively with colleges and universities across India to address the skills gap, but they also have intensive onboarding programs that involve their entry-level recruits residing at separate, state-of-the-art learning and development campuses for months at a time.

In 2009, Tata Consultancy Services (TCS), an IT services company in India, conducted informational sessions at a few colleges with the goal of generating students' interest in a career in BPO. This outreach quickly grew into the Academic Interface Program, an initiative to enhance the quality of the future BPO workforce through the involvement of education.

The program now reaches out to more than 100 colleges in India, engaging with students and faculty through guest speakers, case study contests, a newsletter for academic leaders, and workshops on interviewing skills and other career guidance for students. It also designs university-level courses in business process services and management.

According to an article in Transpire, the quarterly newsletter from TCS's BPO services arm, "The vision of TCS is to see at least 10,000 students enrolled in [bachelor's] degree programs with specialization in business process services and management by 2022, which will be an industry and national record."

Infosys is another power player in the IT industry. In 2011 and 2012 the company ranked second and third, respectively, in Gartner's list of the top five Indian IT service providers. (TCS occupied the number-one slot both years.) As part of its corporate social responsibility strategy, the company seeks to increase India's competitiveness through partnerships with academic institutions. Its flagship program, Campus Connect, is a forum for sharing the needs and best practices of the IT industry with engineering institution partners.

Another Infosys program, Project Genesis, targets undergraduates across various academic streams. The program goal is to increase the employability of students in tier two and tier three towns by enhancing their skills through training, guidance, and industry exposure.

University professors are trained to develop students' English language and analytical skills. Regular classroom instruction is supplemented with access to a web portal hosted by Infosys, where students can find additional career-related information. The program has reached out to more than 100,000 students to date by training more than 3,000 academicians across 1,790 institutes in India.

Mindtree, a midsize IT services firm based in Bangalore, also is working hard to ensure its incoming workforce is up to speed. "An alarmingly large number of engineers joining the IT industry do not come with the skills needed, although thousands of colleges have mushroomed in the last decade to meet the industry's demand," says Rishin Chakraborty, Mindtree's associate director of learning.

The quality of courseware is questionable, he says, and industry exposure by students is limited. "While technology and practices in the industry are swiftly changing, the courseware gets updated only once in a while. So its relevance remains a big question mark. Pedagogy, too, is rooted in age-old methods that focus mainly on theoretical knowledge."

He says more internships should be available for students, and faculty should take industry sabbaticals. What's more, recent graduates, exhausted by pressure from peers and family members to excel academically, are disengaged by learning—which brings Mindtree and other Indian tech companies to the problem of how to onboard "freshers" when they arrive from school.

From campus to campus

Fresh graduates joining India's best IT services companies are, for the most part, passing from their college campuses to their employers' learning and development campuses. After being actively recruited from their universities, entry-level employees are then put through intensive training in their onboarding programs.

Mindtree, for example, has a 90-day onboarding program, called Orchard, during which students are trained at company-owned facilities in Bangalore and Chennai. The program is designed to build the basic skills new hires will need to successfully tackle their first projects at Mindtree. Through action learning activities, onboarders are exposed to engineering and business processes, and they receive mentoring from project leaders.

Taking into account the learners' states of mind as they arrive mentally drained from the rigor of their university degree programs, Orchard's curriculum eschews written assessments, instead providing continual evaluations that are integrated with daily project work. Experimentation and mistakes are not only accepted, they are celebrated—another departure from the traditional academic structure with which onboarders are familiar.

The training is designed to "rekindle curiosity in the minds of learners," which encourages them to tinker with software applications "like a child plays with Lego blocks to discover how they work," says Chakraborty. This approach to learning helps new hires build an engineering mindset, solving problems that they will encounter on the job.

In anticipation of a hiring surge in the next few years, Mindtree is currently building another 20-acre residential learning campus in Bhubaneswar, Odisha. The company onboarded only 800 employees in 2013 compared with 1,800 in 2012, but in an article in the Business Standard, Ravi Shankar, Mindtree's executive vice president and chief people officer, said, "We had front-loaded hiring in FY12 and then tapered it off in the following three years. We do this because it takes time to train freshers. In the fourth year (FY16) we will again front-load."

The new learning and development center will focus on developing recruits' technical and soft skills, as well as on developing habits to promote health and well-being, which Mindtree believes are critical competencies for future global professionals.

TCS also has multiple learning and development centers to receive its new hires. According to the company website, the flagship center, located in Trivandrum, could be "easily mistaken for a modern university campus ... which wouldn't be far off the mark, for the state-of-the-art training center of TCS, set in an idyllic environment—where students can at times hear the roar of the waves, or even the chirping of the birds—is as good as the best university campus anywhere in the world."

The center has been the site of the company's onboarding initiative, the Initial Learning Program, since 1998. This program (which accounts for 50 percent of the company's training budget) primarily serves engineering recruits and puts them through a three-month training session that acts as a bridge between the technical and soft skills they have when they first join the organization, and those that are required at TCS.

The young recruits are "groomed to shed their 'campus frivolousness' and assume their new roles as professionals and corporate citizens. For the freshers, this is a heady period during which they learn a new language, acquire professional skills, and are taught to conduct themselves in different cultural settings."

The program focuses particularly on the global careers for which new TCSers are headed. The program is conducted in English, but onboarders also have the opportunity to learn French, German, and Japanese, and they undergo "listening drills" and role plays to help them communicate in a global business landscape.

Infosys's onboarding program, while still quite robust by most organizations' standards, hosts recruits for a period of only 15 days. The campus, located in Mysore, is equipped with state-of-the-art training tools that include a simulation lab, which imitates the operation floor environment at Infosys; and language labs, which hold interactive media tools to encourage autonomous learning.

Indeed, "holistic" seems to be a key characteristic of all these companies' onboarding programs. When onboarders—often "batches" are recruited from the same colleges and universities—are not in training, they might be working out at the learning center's gym, chatting with co-workers over dinner or tea in the cafeteria, or pursuing additional learning opportunities using the cutting-edge technology available to them. They form close relationships with their fellow onboarders and mentors, learn technical skills in the context of their actual jobs, and immerse themselves in their new employers' corporate cultures.

When they emerge from campus ready for their first days on the job, India's youngest new workers already possess many of the professional competencies they will need to succeed.

Will such careful grooming of its employees help India maintain its edge in the IT services market? The "fivefold growth" that NASSCOM predicts for the BPO industry in particular has yet to be achieved, but it seems these learning and development initiatives are already paying dividends. 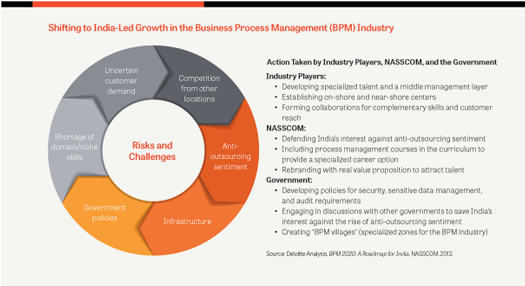 About the Author
Stephanie Castellano

Stephanie Castellano is a former writer/editor for the Association for Talent Development (ATD). She is now a freelance writer based in Alexandria, Virginia.