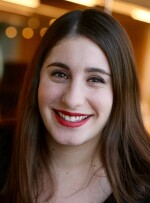 ServiceTitan, a software start-up, has grown from only 10 employees to more than 300 in Amy Herman's tenure, and she has played an important role in delivering training that supports that growth. She has worked on cross-functional teams to create training materials, designed and implemented a product certification, and coordinated the organization's educational strategy at large conferences and trade shows.

What are the most important factors L&D professionals should consider when working on cross-functional teams?

First, figure out what is and isn't in your wheelhouse. When it came to ServiceTitan University, for example, I quickly realized that the e-learning side of things was not really my area. We have an e-learning team who is far more proficient in those types of things than me, and knowing when to let go and let them do what they're best at really helped move the project forward.

Second, not being afraid of self-promoting a little bit is important. If you know when to really push forward and highlight the projects you've worked on with others, it shows that they'll get to work on the parts of their job that they enjoy and get recognition for it in the process.

What's the most rewarding part of your job as a talent development professional at a tech start-up?

The most rewarding thing has been to gain the trust of people in the company. Two years ago, we only had a handful of employees and it was hard to justify having training programs. But now people are lined up out the door to participate in them.

I love being at a company where it's OK to be human at work, so I use my Bitmoji in emails all the time. If you aren't familiar, Bitmoji is a tool that lets you create an emoji out of yourself and use it with lots of different expressions and stickers.

Sometimes texts and emails can be misinterpreted and you really need to see someone's face to get across what you're trying to say. For me, short of taking pictures of your face and sending them out, tools like Bitmoji can be very handy for making your message more human and giving it a little extra context.