The 2011 State of the Industry: Increased Commitment to Workplace Learning

Despite current economic challenges, senior executives continue to invest in developing their employees and understand that a highly skilled workforce is a strategic differentiator. Data from more than 400 organizations across all major industries demonstrate that learning and development is critical to drive growth and sustain a competitive advantage.

The findings of ASTD's 2011 State of the Industry Report show that organizations are just as committed as ever to learning and development (L&D). ASTD estimates that U.S. organizations spent about $171.5 billion on employee L&D in 2010. This amount includes direct learning expenditures such as the learning functions staff salaries, administrative learning costs, and nonsalary delivery costs. Sixty percent ($103 billion) of total expenditures were spent on internal expenses and the remaining 40 percent ($68.5 billion) contributed to external expenses.

The 2011 State of the Industry Report data from more than 400 responding organizations across all major industries show that, overall, organizations continue to be committed to the delivery of knowledge and the development of employees at every level. As evidence, they're investing more in learning and development per employee, maintaining the same number of learning hours, and increasing their expenditure on tuition reimbursement. 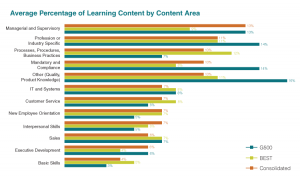 Learning hours used per learning staff member decreased by 20 percent, while the hours available decreased by more than 7 percent—indicating overall decreases in the delivery and consumption of learning content for the year.

Driven by an organization's learning function, the training delivered annually evolves to meet the dynamic needs of the organization and its employees. Prioritizing the learning content topics, the volume of delivery, and the methods with which content is delivered can be driven by several factors, including the organization's size, industry, budget, and strategic learning objectives, among others.

In the report, 12 content areas are identified. The leading content area for the consolidated group is management and supervisory learning. Manager and supervisory content also registered the greatest percentage increase change, going from 10.4 percent in 2009 to 12.8 percent of the content delivered in 2010. Profession- or industry-specific content came in second at 11.3 percent, and mandatory and compliance third, at 10 percent. Not uncommon, the least amount of content delivered was basic skills, at 4.1 percent, indicating that organizations are focusing the majority of development on topics of strategic importance to driving performance and investing in more advanced skill sets.

Instructor-led classroom delivery continues to be the most widely used delivery method. About 70 percent (a 3 percent increase from 2009) of all training is delivered in the classroom—both online and live—and 60 percent of that is delivered by live instruction. The BEST organizations decreased their total instructor-led percentage from 73.5 percent in 2009 to 67.4 percent in 2010. The G500 deliver 64.7 percent of learning content via live instruction in a classroom.

The 2010 decline in the total amount of content delivered via technology by organizations in the consolidated group is atypical of previous year's results and is a trend that we do not expect to continue over time. Many organizations are investing in technology-based delivery systems and methods, and the growing use of technology to deliver content—especially through social media tools—will continue to shape the future of the learning field.

For example, mobile learning is continuing to gain traction—and has the potential to revolutionize content delivery for L&D. Additionally, ASTD's research demonstrates that leading-edge L&D departments incorporate more technology components and processes than their lesser performing counterparts. As the economy and the employment situation stabilize, we expect a return to the growing use of technology to design, deliver, and manage L&D. Adoption of e-learning in support of L&D frequently produces efficiency gains, increases content reuse, and decreases overall costs for learning delivery.

Nonetheless, creating a robust e-learning program requires commitment and investment in development costs. As organizations deploy more e-learning platforms and capabilities, the use of live instructor-led delivery methods will correspondingly decrease, but not entirely. Ultimately, in the coming years we expect to see a more balanced distribution between instructor-led and technology-based delivery methods, and a broader adoption of mobile and social learning technologies.

As the economy continues to challenge all industries, there is no more important time than now to examine how organizations respond by building the skills of their workforce. We hope these data are used by executives and managers to better understand how learning directly affects employee and organizational performance, and to help learning professionals support and defend the learning functions importance and value to improving the bottom line.

Download or purchase the 2011 State of the Industry Report. 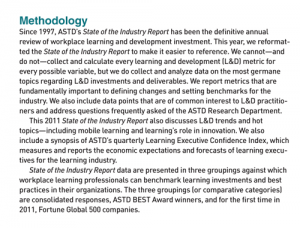 MG
About the Author
Michael Green

About the Author
Erin DeSandro

Erin DeSandro is the senior research specialist with ASTD. She serves as an editor and data analyst for ASTD's research reports including the annual State of the Industry Report.