The United States and China: Western Power and Eastern Ascendancy

The global recession of 2008 shifted the balance of economic power worldwide as many Western nations, including the United States, were overwhelmed by debt crises, bailouts, and increasing unemployment. Meanwhile, China, the Eastern superpower, enjoyed continued economic growth and in 2010 became the world's second largest economy.

United States and China relations have grown increasingly strained during recent years due to this economic power play and related international conflicts involving jobs, trade, and currency. Yet the two countries share many similarities regarding their workforces and labor rights. The Asian American Studies Center at the University of California Los Angeles recently released the U.S./China Media Brief, which summarizes these key issues.

Job losses. Many economists believe that outsourcing, especially in the manufacturing sector, has taken jobs from Americans; greater productivity, automation, and a shift to service-sector employment also are factors for this migration. In China, wages increased by approximately 13 percent each year from 1978 to 2009, driving jobs out of the nation as American corporations have moved their operations to cheaper countries or back to the United States.

Unions. In 2010, 14.7 million Americans, or 9.6 percent of the workforce, were members of a union. Of China's 815.3 million-member workforce, 239 million (29.3 percent) were union members. In the United States, workers must organize to form a union; in China, the working class has formed the mass union organization, All-China Federation of Trade Unions.

The future. While China moves to a consumption-led economy, the American workforce is moving from a manufacturing economy to one based primarily on services and information. Globalization requires both countries to work together to solve their economic and social problems, as well as sustainably manage their collective consumerism and environmental impact. 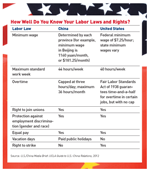