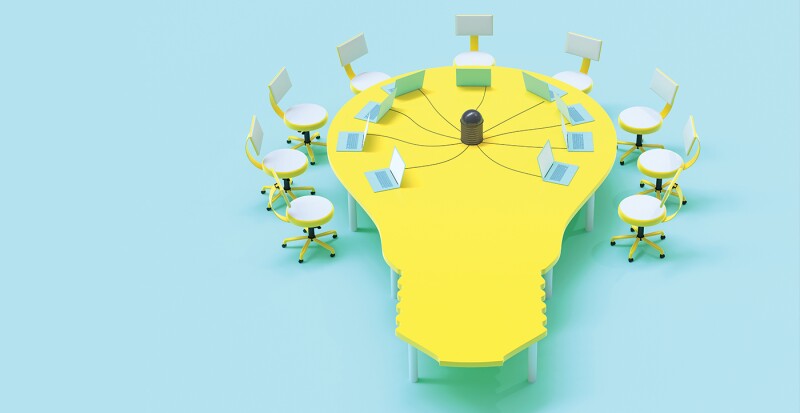 How many times have you heard these kinds of statements after a strategy or brainstorming session?

How can you help employees to build better ideas through robust, constructive, and inclusive debate?

From idea shortage to abundance

Many years ago, the L&D managers at a high-tech company asked me to help them deal with the dearth of good ideas they believed resulted from workers' reluctance to challenge one another, aversion to conflict, and wanting to play it safe. The L&D managers perceived many team or task force meetings as low energy and unproductive—but the meetings after the meetings were full of wry comments and put-downs and revealed the essence of participants' real opinions.

After many discussions with meeting participants and observing numerous meetings, I concluded that the problem resulted from a combination of cultural barriers, clunky processes, and skill deficits. With a colleague, Rebecca Hendricks, I developed a process and a set of skills called constructive debate that enables leaders and teams to participate in vigorous back-and-forth contests intended to develop stronger ideas rather than prove who is right.

We also worked with the client to overcome organizational barriers to such conversations. The company rolled it out through intact teams with the leader or manager actively committed to supporting a free exchange of ideas. It turned out that the organization was full of great ideas—but those great ideas walked out the door every day still between the ears of the people who had them.

Through the constructive debate process and support from company leaders, the meetings after the meetings became less frequent, people were more forthcoming with new and unusual ideas, and they more often took the risk to challenge the ideas of more senior or politically connected colleagues.

What hinders and supports ideation

The purpose of constructive debate is to create an environment that supports the open exchange and exploration of ideas, leading to fuller participation, greater innovation, and better decisions.

It's reasonable to wonder why organizations full of well-educated and creative people sometimes fail to produce much that is truly new and notable. Several factors contribute to such situations:

As a result of those factors, it's often easier for people to wait for others to speak up, give bland and traditional ideas a pass, and wait until later to share their real opinions. Constructive debate can counter the factors because it comprises the following features.

Rational rather than emotional. The content of the discussion is based on facts and logic rather than opinion and belief.

Interactive rather than sequential. Participants respond to one another by listening and questioning before expressing their own point of view—rather than simply waiting for their turn to talk.

Focused on identifying, testing, developing, and improving promising ideas in preparation for decision making about them. This process can help develop ideas into innovations or explore solutions to stubborn problems. It prepares a group or team to make the best possible decisions.

It's important to understand the basic concepts of constructive debate:

In the interest of making that kind of productive conversation possible and practical rather than an ideal to attain someday, Rebecca and I designed a series of team workshops for the high-tech company to teach participants four distinct and easy-to-learn skill sets. Each set comprises three behaviors, most of which individuals already know how to exhibit. The model makes it easier to choose behaviors that advance a debate or conversation, moving it forward toward a constructive decision-making process rather than victory or defeat.

Skill 2: Engaging others. That includes:

• Drawing out ("Tell me more about how you think that would work.")

• Building on ideas ("I think we should consider doing what you suggest for all our meetings, not just informational ones.")

• Anticipating consequences ("My concern is that people may end up with Zoom fatigue if we do this too often.")

Those behavioral skills, used in a timely and effective way, can promote healthy and robust dialogue and debate. As a consultant, facilitator, or leader, you can model the behaviors, name them, and even teach others how and when to use them. Making them explicit, as suggested for the basis of your ideas, creates a productive climate for learning and keeping a balance between content and process so that you can continually improve the way you or other employees approach idea generation, discussion, debate, and decision making.

That kind of thoughtful communication takes time and effort. However, not every topic is worthy of such an approach. Here are several descriptors for issues that require or benefit from constructive debate:

There is no single right answer or formula for a solution. You want to explore and test a variety of ideas from diverse sources and not prejudge the outcome of the discussion.

Critical thinking is possible; facts and logic apply. To critique or compare the value and fitness of ideas and to improve or develop them, you need agreement on the fundamental components of the situation. This is not a process in which everyone is entitled to their own facts.

You will need to exercise sound judgment to identify ideas that are relevant to important strategic goals or initiatives. A constructive debate is not an academic argument. It's related to concrete outcomes that deserve serious attention.

You are concerned that political pressure or groupthink could produce a suboptimal decision. Organizational issues that are "hot"—where people potentially have something to lose but have a common interest in reaching agreement—can lead to a rush to move away from uncomfortable disagreements. In conflict-averse organizational cultures, people may be willing to put up with a mediocre decision rather than take the risk to speak up and hold a contrary stance to what seems easiest and most acceptable, especially to leadership.

Easily changeable everyday decisions that don't require a large commitment of resources and are generally able to be informed by good practices from the past don't require constructive debate.

Of course, not all companies or teams are going to benefit from this approach on all topics. Barriers may exist in an organization's culture, processes, or leadership.

The culture must be open to people with diverse backgrounds and experience. Design the processes to engage all members of the organizational community and enable them to participate. Leaders should have the emotional maturity and confidence to welcome and even encourage challenges and to model constructive debating behavior. The participants in the conversations should have reasonably good communication skills; the ability to maintain an open mind about ideas and solutions; a minimum of conflicting vested interests with one another; confidence that well-motivated dissent will not be punished; and shared values about quality, excellence, and innovation. The issues should be compelling, and there should be good practices regarding establishing norms, criteria, and decision-making processes.

To facilitate or conduct a constructive debate, several norms and practices will make this complex process smoother, more interesting, and more likely to result in great ideas—both for you and the participants.

Stay open-minded. Set aside any preconceptions about a right answer.

Listen with curiosity and as an ally. The overall goal is for the group or team to build better ideas before making decisions. However, another useful goal can be for participants to help one another become more skillful at presenting, explaining, and defending their own ideas. They also should provide feedback, build on and improve others' ideas, debate without creating interpersonal conflict, and take appropriate risks to challenge themselves and others.

Ask for and guide feedback. An individual is more likely to listen to and learn from feedback they have invited or shaped to make it more useful. Aim to spend less time being defensive and more time collaborating.

Insist on a diversity of ideas. Avoid seeking the one right answer, and consider all reasonable possibilities. That requires participants to postpone judging until they have spent enough time understanding others' ideas. It also entails not being satisfied with just a few or only tried and tested ideas but soliciting more and encouraging people to move beyond previous boundaries.

Say nothing that impugns others' intelligence or motivation. Critique ideas, not people. That could mean intervening to stop any critique that is ad hominem or strays from a focus on the problem or opportunity for which the group is seeking a solution or a set of strong options to test.

Balance creative and critical thinking. Encourage a dance between advocacy and inquiry. There are times (acknowledge or even schedule them) for opening up to new ideas and possibilities. Then there is a time to narrow to the most promising ideas. In most constructive debates, a leader or facilitator can make that explicit and note when participants try to mix the two.

Acknowledge useful and interesting ideas, and make sure to attribute them to the person who came up with them. In some companies, people hold back on expressing new or original ideas for fear that others will take credit for them. Leaders or facilitators should model the practice of specifying who has originated a promising idea.

Check your title, vested interests, and personal animosities at the door. The process only works if power dynamics and interpersonal conflict are, as much as possible, left outside the physical or virtual meeting room.

The high-tech company implemented constructive debate in many of its locations. We prepared the leaders beforehand and coached them to be a team member, model the norms and skills during sessions, and follow up by using the process for important issues. By all reports, the constructive debate sessions were successful—many of the leaders implemented the process post-training, which led to a considerable positive impact on the culture.

You can help employees build better ideas if you plan for, design, model, or teach the skills and facilitate constructive debates. By doing so, you can create and sustain the best possible arena for greater participation, deeper learning, better decision making, and successful innovation.

To know whether you have experienced a constructive debate lately—or ever—think about a recent meeting, whether face-to-face or virtual, during which participants discussed an important topic or a difficult decision. Then check to see which of these descriptive sentences apply.

Few meetings will meet all of those criteria, but the more of them that describe your experience, the more likely it is that ideas will be robust and innovative and decisions will be clear and garner support.

This article is based on the author's book Building Better Ideas: How Constructive Debate Inspires Courage, Collaboration, and Breakthrough Solutions (Berrett-Koehler, 2019).

About the Author
B. Kim Barnes

B. Kim Barnes, CEO of Barnes & Conti Associates, Inc., of Berkeley, California, has over 30 years of global experience in leadership and organization development. A frequent speaker at professional conferences, Kim has published many articles in professional journals and books and is the developer or co-developer of popular Barnes & Conti programs such as Exercising Influence, Intelligent Risk-taking, Managing Innovation, and Consulting on the Inside.

Her books include Exercising Influence: A Guide for Making Things Happen at Work, at Home, and in Your Community (Wiley, 2006; 3rd edition, 2015) and, with Beverly Scott, Consulting on the Inside: A Practical Guide for Internal Consultants (ATD Press, 2011). After completing this book, Kim was inspired to begin writing a tongue-in-cheek corporate mystery series with an internal OD consultant as the protagonist. The first book, Murder on the 33rd Floor, was published in 2012 and the second, Murder on Retreat, was published in 2014. Kim has also co-authored, with Aviad Goz, Self-Navigation: A Compass for Guiding your Life and Career (Johari Press, 2013). Her most recent book is Building Better Ideas: How Constructive Debate Inspires Courage, Collaboration, and Breakthrough Solutions (Berrett-Koehler Publishing, 2019).