In The Ten Golden Rules of Leadership: Classical Wisdom for Modern Leaders, two accomplished professors from Long Island University, M.A. Soupios and Panos Mourdoukoutas, challenge prevailing leadership development models. The authors bemoan a shortage of leaders with broad vision, depth of character, and competence to deal with the complexities and problems of today's business environment.

Soupios and Mourdoukoutas are reacting to the proliferating "cottage industry of leadership," which they believe is missing an important piece: a worldview that is informed by philosophical insight. And they have years of study to back up their criticism. Soupios has taught political philosophy for more than 30 years; Mourdoukoutas teaches economics and as a Forbes contributor, covers global markets, business, and investment strategy.

The Ten Golden Rules of Leadership contends that "the qualities and practices of outstanding leaders have remained constant since civilization began." It is a fresh reference to the Greek thinkers already familiar to many of us, and the book is intended to connect business leaders with ancient wisdom.

The authors define leadership as "an uncommon composite of skill, experience, and ripened personal perspectives." Leadership is special, complex, and rare. More importantly, leadership is not the same as competent management or administration. Instead, it involves governing the work environment with vision and purpose.

"Simply put, they [leaders] lead by dignified example, turning subordinates into â€˜believers' who will go that extra mile to advance institutional objectives," write Soupios and Mourdoukoutas. In other words, many managers can run an organization, but that doesn't make them leaders.

To help guide readers on the path to classic leadership, the authors examine a specific challenge to true leadership within each chapter. Presented as a leader maxim, or golden rule, each chapter begins by quoting a classical thinker and concludes with summary bullet points displayed within "The Golden Leadership Grid." Occasionally, a simple diagram or text box is used to illustrate relationships, differences, or key points.

For example, Soupios and Mourdoukoutas spotlight Plato, author of Republic, to explain how to lead a "good life" as a leader. To Plato, the best form of leadership had philosophers as rulers.

The authors advance this ideal of the philosopher-leader, a modern manifestation of Plato's philosopher-king. By profiling Plato's perspective on leadership, this book tries to inspire current and prospective organizational leaders to aim higher and work harder on themselves—and that has been and will remain an honorable goal for any human being.

Meanwhile, another chapter highlighting thinking from Sophocles, famous for his hero plays, examines the idea of the hero-leader. While the authors draw the portrait of a leader whom some might follow to the ends of the earth, they are wise to question whether this epic individual is the sole avatar of true leadership. For instance, do Bill Gates and Steve Jobs, two leaders casually mentioned by the authors, make the best examples of "hero-leaders"?

To be sure, recent challenges (such as the aftermath of Hurricane Katrina) and certain roles (such as the American presidency) seem to require superhuman leaders—visionaries with integrity who can inspire and unify people to accomplish great feats. But the authors explain that the "super leaders" currently being developed by organizations may require very different characteristics in the future as the population diversifies further.

The book discusses how prospective leaders in the future will diversify. Some may have roots in Eastern philosophy, for example. In addition, a growing number of leaders will be non-white or women. Likewise, governance will gradually be different, and that will be a good thing.

As a result, the authors do not insist on only one valid view of leadership. They do argue, however, that there is a great need for modern leaders to seek guidance from ancient wisdom—and it is hard to argue with that opinion.

Refreshingly, unlike many in the cottage industry they deplore, Soupios and Mourdoukoutas place the onus of leadership development on the individual leaders. They contend that, ultimately, the choice to tackle the difficult work of inner development is one that only the aspiring leader can make. Indeed, although an organization's talent development function can describe and clarify leadership duties, only the leader can make a lifelong commitment to do the work.

Readers might decide that this message is dispatched by professors not in the same fray as actual managers and executives, but that would be a mistake. The relevant, constructive guidance from classic thinkers can help organizations troubleshoot problems, such as declining productivity, quality, and employee engagement, that are keeping many leaders awake at night.

Whether as a daily guide to becoming a better boss or as a lodestar by which to set one's course, The Ten Golden Rules of Leadership: Classical Wisdom for Modern Leaders delivers. 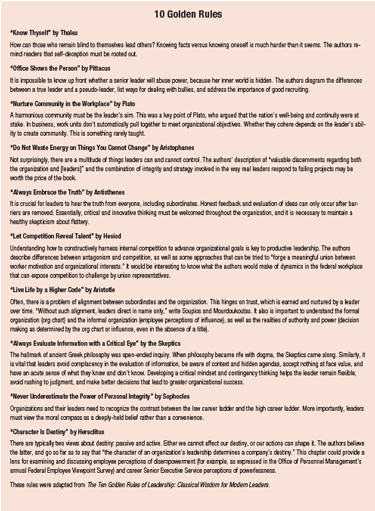 About the Author
Kitty Wooley

Kitty Wooley  worked at the U.S. Department of Education for 19 years until her retirement in 2013. Through Senior Fellows and Friends LLC, she creates conversational containers that energize and encourage capable federal employees to significantly enhance the scope and impact of their work by building collaborative networks across organizational boundaries. She can be reached at [email protected]