Through training, collaboration, and strategic planning, the Federal Coaching Network is spreading the practice of coaching across the government.

"I celebrate this community of caring and courageous human beings!" reads a sticky note on the training room wall after the first day of the 2016 Federal Internal Coach Training Program. Over the past three years, the U.S. Office of Personnel Management (OPM), in partnership with the Chief Learning Officers Council, has established and grown the Federal Coaching Network, a community of individuals bound by a mission to foster a culture of coaching across government. The network identified four initial objectives:

On the quest to achieve these goals, a space was created for federal employees across government to feel heard, valued, and engaged in a way that allows them to maximize their potential in both their personal and professional lives.

The Need for a Federal Coaching Culture

In times of fiscal constraint, training and development is often pushed to the bottom of the priority list. Coincidentally, now, more than ever, the effectiveness of the federal government depends on strong leadership. Coaching is one of many powerful tools that help support and develop the type of leaders the nation needs for the 21st century.

Building a federal coaching culture demonstrates an investment in and a commitment to the civil servants who carry out the mission of each organization day to day. Not only do employees improve by learning coaching skills they can apply on the job, but they are given the opportunity to further their own performance and professional development by having access to a coach. In achieving a coaching culture, an organization stands to gain a host of positive outcomes, including, but not limited to:

Fundamentally, a coaching culture promotes candid and respectful conversations between employees that foster reflection, self-awareness, and empowerment. A coaching culture does not focus on a specific program; instead, it integrates coaching skills and approaches into the everyday interactions of managers, employees, and their peers.

Hallmarks of a coaching culture include these facets:

In many organizations, daily work, challenges, and communications tend to be reactive rather than proactive, leaving employees and managers feeling overloaded. Coaching brings focus on the future and on creating action plans to achieve goals and outcomes. A coaching culture supports the individual and larger team, empowering all to be at their best in any situation—to learn how to create a future they desire and move from the present reality toward that desired future state.

The Beginning of the Federal Coaching Network

In December 2012, OPM released the Executive Development Best Practices Guide, which compiled information from leading public and private sector organizations on the continued learning of executives. This research highlighted a common difference between sectors: Coaching was an integral part of private sector leadership development programs, whereas in government it was often used as a remedy for poor performance or to close specific competency gaps.

Since the release of this guidance, OPM worked with agencies to shift the emphasis of coaching in government. A closer look revealed small pockets of progressive thought—namely the departments of the Treasury, Agriculture, and Health and Human Services, which had started the conversation around creating an internal coaching community of practice.

In early 2013, the Chief Learning Officers Council included coaching in its strategic plan. The goal was to develop an inventory of certified coaches within the federal government and to facilitate the sharing of coaching services across agencies at no cost. OPM took the lead on this effort, and a core group of representatives were designated from each agency. The team identified itself as the Federal Coaching Network, and members quickly bonded over their passion for coaching and established the four objectives noted earlier.

OPM created a portal on the U.S. Office of Management and Budget's (OMB) max.gov website (only accessible by federal employees) to support the Federal Coaching Network. The ROI research was consolidated and posted on the site as a resource for anyone looking to build a business case for coaching. The coaching guidance document is drafted and expected to be released in 2017.

In early 2014, the Federal Coaching Network developed and launched the inaugural Federal Internal Coach Training Program (FICTP), which has been designated by the International Coach Federation (ICF) as Approved Coach Specific Training Hours. Successful graduates of this program can leverage the program to obtain an ICF Credential and other formal coaching credentials.

To date, more than 20 of our students have achieved the Associate Certified Coach ICF status. Many others are in the process of accruing the 100 hours of coaching needed to become certified. The program also received the 2014 Best Leadership Development Program Award from Human Capital Management in Government.

For the initial training program cohort, chief learning officers of each agency were invited to select up to five employees to attend the 136-hour training program, which took place over eight months. The participants were required to perform and receive many hours of coaching practice and mentoring in addition to 11 days of in-person training.

The FICTP launch initially produced 70 internal coaches from 18 different agencies. A second cohort that started in June 2015 has 53 graduates, and a third cohort of 60 began the eight-month training in November 2016. There is no tuition cost incurred on agencies; the investment is in program participants' time and their salaries, as well as the time and salaries of the federal instructors and program coordinators. Participants are required to complete a two-year minimum continued service agreement to protect the investment their agencies made.

Figure 1 shows the framework used as a model to guide the training. Through the program, students acquire a thorough understanding of the foundations of professional coaching and how to apply them in the federal context. Students explore the similarities and differences between coaching and related disciplines and the scope of coaching's potential. In addition, they learn and practice coaching skills in real-time conversations and observe and experience the effect of these skills as a coachee. 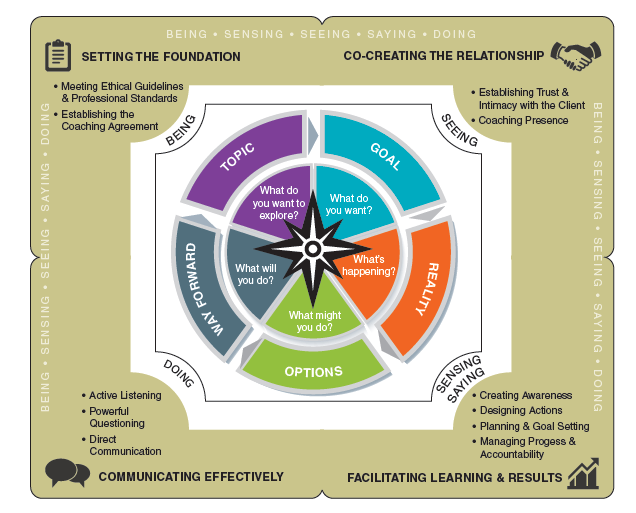 The Federal Internal Training Program is on track to save the government more than $3.8 million through fiscal year 2016, when 233 coaches will have been trained and more than 7,700 collective hours of coaching will have occurred. The anecdotal evidence, encapsulated in participants' comments, also speaks volumes.

In June 2015, OPM launched a government-wide database of internal federal coaches to help agencies enhance their development efforts while minimizing costs and maximizing impact. The database is on OMB's max.gov website and is accessible only to designated points of contact within each agency. Points of contact are responsible for submitting information on currently available coaches within their agency, as well as matching coaches from the database with employees who have expressed an interest in receiving coaching. There are currently 95 coaches listed in the database.

Individuals may seek coaching for any number of reasons. Coaching engagements typically focus on one or more of the following goals:

Coaching engagements typically last for at least six one-hour sessions, but they can vary depending on the coachee's need or agenda. In some instances, the coachee may find it beneficial to work with a coach for a shorter or longer period of time. Factors that may affect the length of a coaching engagement include the type of goal, the way individuals or teams prefer to work, the frequency of coaching meetings, and, for external coaches, financial resources available to support coaching.

This is only the beginning of an effort that will transform the way we work. The Federal Coaching Network has just begun to gain momentum, and the prevalence of coaching is expected to increase as the evidence of its value spreads. Agencies are slowly beginning to recognize the impact of coaching and are incorporating the skill set into job descriptions and performance plans.

The focus for the coming year is to build coaching capacity in our federal leaders. We encourage leaders at all levels to utilize a "coach approach" when engaging employees and stakeholders. Integrating coaching into the fabric of an organization's talent management process—from recruitment and hiring, to training and development, to performance management, to career transitions and retirement—supports a coaching culture that will enable employees to maximize their potential on the job.

What Coaching Should Be

"Coaching is not merely a technique to be wheeled out and rigidly applied to certain prescribed circumstances. It is a way of managing, a way of treating people, a way of thinking, a way of being. Roll on the day when the word coaching disappears from our lexicon altogether and it just becomes the way we relate to one another at work, and elsewhere too."

How has your participation in the FICTP improved your job performance?

How have you or your agency specifically benefited from your participation in the FICTP?

About the Author
Cassie Brennand

Cassie Brennand is a leadership and executive development specialist at the U.S. Office of Personnel Management.