What Do Feds See in the Green Mirror?

In years past, the main driving force for implementing sustainable practices was the desire to build a good reputation. Today, what tops the list is improving operational efficiency and lowering costs.

How does the U.S. government view its sustainability efforts, compared with how businesses perceive their own? As it turns out, there is a great deal of similarity between what the government sees in the mirror and what the private sector sees in its reflection. Government and private businesses share many of the same core sustainability values, expect comparable bottom-line benefits, and encounter some of the same barriers to further progress. What's more, they can probably learn a lot of the same lessons.

LMI, a government consulting firm, wanted to uncover attitudes and actions related to sustainability in the public sector, and how that compares with the private sector. We were especially intrigued by the McKinsey & Company business surveys of recent years that illuminate why and how companies advocate sustainability, and how much of an effect executives believe it has on the bottom line.

The McKinsey surveys have revealed, for example, a shift in motivation in the private sector. In years past, the main driving force for implementing sustainable practices was the desire to build a good reputation. Today, what tops the list is improving operational efficiency and lowering costs.

To find out the thinking of government employees on such issues, we invited 512 federal managers and staff members working in the area of sustainability to participate in a survey. The 144 respondents (28 percent response rate) represented numerous agencies and business lines within 13 federal departments. Many of the 24 questions on the survey were similar to those in the McKinsey studies, so we could probe the same issues and produce results that could be meaningfully compared.

Rather than defining sustainability for survey respondents, we asked them to identify the definitions of sustainability that represent their own understanding. Ninety-one percent align themselves with the United Nations' definition of sustainable development: meeting the needs of the present generation without compromising the ability of future generations to meet their own needs.

Furthermore, half of the respondents report that fellow workers in their agency either "fully" or "mostly" define sustainability the same way they do. This is significant because it evidences a widespread, mature understanding of sustainability, along with a cohesiveness of thought among those in the federal government working in this field.

Not unlike the private sector, agencies appear to integrate sustainability into their general culture and attitudes much more effectively than into concrete practices and actions. Only 34 percent think that the concept of sustainability is fully or mostly integrated into their agency's overall actions. More than 90 percent of respondents report that their agency has a written or spoken commitment to sustainability, but again only 34 percent believe that commitment is fully or mostly integrated into activities.

Where has sustainability gained the strongest foothold in agencies? As Figure 1 shows, respondents are most likely to say sustainability is "fully" or "mostly" integrated into the agency's mission and values, as well as into internal and external communications.

One senior government manager regards the results as encouraging. "Many of the departments surveyed have a non-environmental core mission," says Christopher Oh, Enterprise Management Office director for U.S. Customs and Border Protection, "so it is surprising that they are implementing sustainability at this level, since it is not funded."

On the other side of the coin more than half of respondents feel that it is only "somewhat" integrated into operations, and nearly half feel that it plays either only a slight role or no role at all, in budgeting. With an eye toward the future federal workforce, just over half of the respondents indicate that sustainability plays little or no role in recruiting.

Considered as a glass half full, these results indicate an early developmental stage of sustainability, where an organization's policy commitment and a validating culture lay the groundwork for future action. "The survey results show that this is a critical stage," Oh says. "It is time to move from the infant stage to a more mature implementation in sustainability. The information indicates that we are ready to move to the next stage."

A non-inclusive budget process is not the only obstacle. Our survey asked respondents to identify the factors that they regard as hindering sustainability in their agency (see list on page 48). The most common perceived barrier is "the pressure of short-term objectives at odds with the longer term nature of sustainability."

Likely related to that is the next most cited factor, insufficient allocation of resources. Other factors at work relate to weak accountability (see Figure 2).

Yet the survey also found that 72 percent of respondents believe government agencies are taking steps to get over such hurdles. Eighty-five percent believe that the number of barriers is the same as or less than last year, and only 15 percent believe that the barriers now are more numerous. This could suggest that the obstacles are not insurmountable and that federal agencies are making progress toward overcoming them.

What do survey respondents think is the solution to the obstacles they face? We asked them to rank a list of 10 suggested approaches. As Figure 3 shows, they put stronger leadership commitment at the top.

Our findings show that government and business share the top two areas of integration: mission and values, and external communication. They also share the perception that the biggest barrier is the pressure from short-term objectives that are at odds with the longer view needed for sustainability (see Figures 4 and 5).

So who is leading in the area of sustainability, the public or private sector? Regardless of public perception, both sectors have put sustainability high on their list, and both still have much remaining to do. As Oh puts it, "The government tries to learn from and operate like business in many ways. We are doing the same thing in sustainability."

The findings from this survey suggest some of the next actions that would help government agencies build on their sustainability efforts.

Although the United Nations brought awareness to sustainable development in 1987, the U.S. government has had comprehensive sustainability-related mandates for only about six years. Executive orders signed in 2007 and 2009 set goals for greenhouse gas reduction, sustainable buildings, sustainable acquisition, energy efficiency, renewable energy, recycling, and water conservation.
In a relatively short time, the federal government has made significant progress in incorporating sustainability into its mission and values, and its internal and external communication. But like a marathon rather than a sprint, a long-term perspective is needed for supporting action in the present.

And although sustainability, in actual practice, looks different for different organizations, it seems there are themes that the public and private sectors share. These could offer opportunities for productive collaboration. Understanding the federal government's current attitudes and actions toward sustainability can help uncover practices that are working well, areas that need improvement or clarification, and potential solutions. 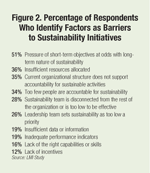 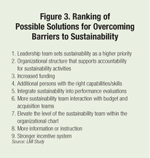 About the Author
Jennifer Bitting