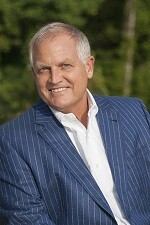 Bill Treasurer is the chief encouragement officer (CEO) of Giant Leap Consulting, a courage-building company. For more than two decades, Treasurer has traveled the world working with thousands of executives to strengthen their leadership impact. He is the author of the international bestseller, Courage Goes to Work, and Courageous Leadership. His newest book is Leaders Open Doors, published by ATD Press.

AS: You wrote in the ATD Human Capital Blog last year that leaders need to care about their people, not just the bottom line. That seems almost like a radical concept. What arguments do people bring up when you suggest this?

BT: The most common argument, amazingly, goes something like this, “I really want to develop my people; I just don’t have the time.” People whose own performance is dependent upon the performance of other people feel that pressing priorities trump the importance of developing their people. In essence, they’re making the argument that they’re too busy to be a good leader.

AS: And what’s your response?

BT: Rather than hit a person over the head with the obvious—like, “Dude, do you realize how stupid that sounds?”—I prefer to come at the issue a little sideways. I get him to reflect on leaders who have made a big impact on his own career. Who, for example, paid attention to him? Who helped him develop skills he didn’t even know he had? Who brought him into situations and opportunities that helped him grow, personally and professionally?

After getting a person to reflect on the leaders who “opened doors” for him or her, I ask the person to summarize in one word their sentiment for that leader. Words that I often hear are “loyalty,” “respect,” “trust,” and “gratitude.”

Next, I have the person answer this critical question: “If a year from now I were to coach one of the people you’re currently leading, what word would you like to hear them say that would summarize the impact you are having on them?”

Basically, I stoke the person’s conscience. I get them to reflect on leaders who made all the difference in their life, and then have them consider whether they are having enough positive impact on the people their leading. By doing that, leading people becomes much higher on their priority list.

AS: You’ve also said that leaders must motivate people with opportunities, not fear. It sounds like leaders need to take time to really know their employees—what interests them, the opportunities that might push them. Are most of the leaders who you meet naturally “people people”? And if not, what can leaders do to develop this part of themselves?

BT: Opportunity is hugely motivating. Einstein once said, “All that matters in human society is the opportunity for development accorded the individual.” Think about that. One of the smartest people who ever lived is basically saying, “You know what? Developing people is what matters most to moving the human species forward.” By the way, that means people in talent management professions are pretty dang important!

The challenge, of course, is that some leaders are far more comfortable setting strategy, forecasting budgets, analyzing data, and issuing directives than dealing with people. George Lucas, for example, said he loved directing movies…except for having to deal with the actors.

Some of the early leadership research centered on the differences between leaders who are good at “initiating structure” (i.e., “task” leaders) and those who good at nurturing relationships (which the researchers called “consideration”). Some research indicated that leaders tend toward one style or the other. Other research suggested a leader can be both—good at structuring tasks and good at building relationships.

I view the crux of the issue as having less to do with style and more to do with what a leader values or fixates on. When a leader fixates too heavily on getting results, the way people are treated often suffers. It’s more of an “ends/means” thing than a style thing. Leaders who focus exclusively on the ends (or results) often lose site of the fact that people are the means to getting the results.

Reaching leaders so they can develop the “people” part of their nature requires helping them see how paying attention to the developmental needs of their people—by providing them with skill-stretching opportunities—is the surest way to get the stellar results they desire. If you can get a leader to think means/ends—that is, people before results—instead of the other way around, you’re golden.

Profitability is a function of people-ability.

AS: What should someone consider before taking on a leadership role? If someone is offered a position, is there anything in particular that should give them pause?

BT: Someone considering taking on a leadership role should consider why they want to lead. If it’s because they see taking a leadership role as a path to making more money, the motivation is in the wrong place. If it’s about being able to make a positive impact on people, and having a greater influence on decisions in the organization, the motivation is right. A leader has two responsibilities: leave the organization better off than you found it, and leave people better off than you found them. You accomplish the former by focusing on the latter.

There are some things to look for when you’re considering moving into a leadership role. First, is the person you’ll report to actually someone you can look up to as a leader? What kind of culture and climate have they created? Also, what challenge or problem will you be tasked with resolving? Is it the kind of challenge or problem that excites you? How will the organization support you in the role, in terms of budget, training, and sponsorship? Are you inheriting an existing team, or will you be building your own team?

As long as you’ll be led by someone you can look up to, the role has a meaty problem or challenge worth solving, you’ll be well-supported by the company, and you have influence over the constitution of the team, you should be in good shape.

AS: Do leaders need MBAs or specific schooling, or can they learn what they need on the job?

BT: An MBA is definitely not a requisite to being an effective leader. Too many MBA programs still place too much emphasis on the financial, bottom line aspects of management, though that’s starting to change. There are some great MBA programs focusing on leadership and entrepreneurship now, thankfully.

The best way to learn about leadership is by leading. Leaders lead. If you have an interest in developing your leadership skills, look within your own organization for challenges and problems you’d like to contribute to solving. Come to your boss with ideas for how you can add more value. Let them know that you’d like to take on more responsibly. Get involved in leadership opportunities outside the organization, such as civic or church groups. In other words, if you want to lead, start leading. Actually leading is the best way to learn about leadership.

AS: How can leaders take care of themselves, to make sure they can keep doing the hard work necessary to their roles?

BT: Never stop learning! Talk to leaders you admire, inside or outside the organization. Contact authors you enjoy and ask them questions about leadership—it’s so easy to do these days. Attend training seminars and events, like ATD’s annual International Conference and Expo.

Most importantly, carve out time to think ahead. The word “lead” literally means “to stay out in front.” In other words, leadership has a lot to do with forethought. It’s important to get disconnected from all your electronic tethers so you can hear yourself think and focus on the future. Once a week, get away from the office or home, and carve out time to think forward. And at least once a year, go on a retreat—and don’t bring your computer. Everybody’s got a little leader inside them, and when you’re quiet enough to pay attention to it, you’ll be surprised how smart your inner wisdom can be.

AS: Is there anything else you’d like to add?

About the Author
Amy Souza

Amy Souza is a freelance writer and editor and the founder of Spark--a call-and-response project for artists, writers, and musicians. She edits ATD's member e-newsletter, ATD Links; [email protected]