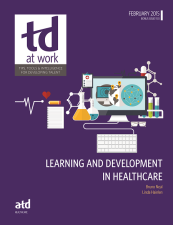 By Bruno Neal Linda Hainlen
Bookmark
Share
Sample Chapter
Pricing
Save when you buy in bulk.

The learning and development (L&D) needs of the healthcare industry are dramatically different from those of other businesses, making for unique challenges for the talent development field. Patients are not customers, for example, and healthcare’s learning audience is extremely segmented. Additional hurdles to designing and delivering training include the changing dynamics of healthcare—for example, new regulations and the increasing number of individuals accessing healthcare services and its payment structure. This issue of TD at Work will explain how: