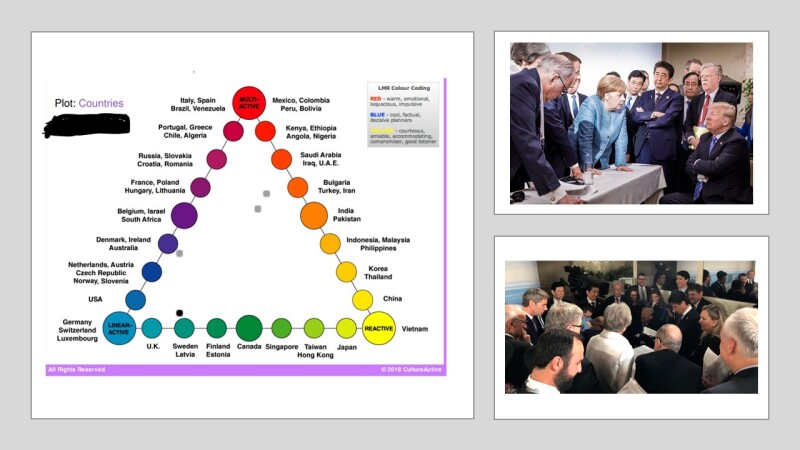 If you answered "yes" to my question, I would say you are right. Let me rephrase this, Does this image remind you of your global team during a disagreement?

Fellow TD-ians, this post is not about the global political impact of the G7 summit but is a learning opportunity to understand the complexity of intercultural teams aka global teams. You see here two images of the many perspectives of the same event. What is interesting is the mindset with which the photographer has taken the shot and also the viewer's (eye of the beholder)perspective. How we perceive the image is completely based on our cultural makeup and biases.  Let's look at it a bit in detail, Below I am referring to RichardLewis Culture Active model.  The model classifies people not basis of countries but on the basis of behavioral values. These values are Multiactive, Linear-Active and Reactive. You can see the colorful triangular plot above that has added another layer of categorization on the basis of nationality for a  better understanding of the model.

From a Linear Culture POV- (typical examples, Germany, USA, UK as examples), the image presents disagreement or does it? Notice the body languages captured for the German PM and the  US president. Displaying disagreement, persuasion, and defiance. These non-verbal signs are easy to spot.

But what if  I told you that they may bring a different reaction in your team members who are Multiactive or Reactive personalities.

From a Multi-Active POV,(typical examples, most of South America, Russia, France, Middle East, South Asia to some extent), this could be a usual day at the meeting. Right? If you have worked with anyone from the mentioned nationalities, you know what I am talking about. Thoughts are distilled, discussions take place, with disagreements, critiques all out in the open by Multiactive personalities. What may seem like a tensed boardroom scene by some is considered a growth opportunity by others.

Then again, this may bring about an entirely different array of reactions by people who have Reactive personalities.

From a Reactive Culture POV (Think of Japan, China, Korea, partially South Asia)- this could be a catastrophe. Focus on the Japanese PM's expression. Passive yet antagonistic. Then again, most of us may not be able to identify these characteristics because they are very subtle.

Do these subtle gestures really matter? Why should we spend time decoding them? Think again.  Mid-size and larger companies invest three-times the annual compensation per expat assignee every year.

To summarize, if next time you experience yourself been caught in the moment where you may not able to put a finger on why your global team is not reaching in consensus, think of this iconic G7 image, layered non-verbal expressions and all.

1 Comment
Sign In to Post a Comment
Sign In
RM
Renee Meyer
June 13, 2018 11:42 AM
Hello Somya,
This is a concrete and (very) current example of different interpretations according to culture type. Thank you for highlighting what should be clear for intercultural communicators.
Kind regards
Renée