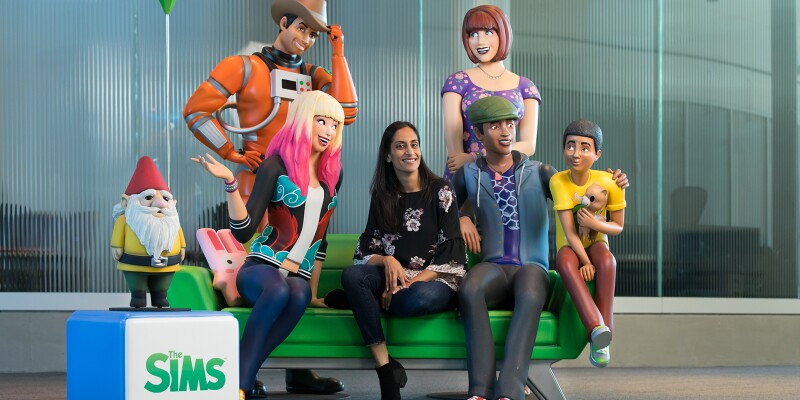 Enriching the Player and Employee Experience

Video gaming and talent development take off in tandem.

Long tenure at one company is not common in the video game industry. But the very things that make the industry volatile—changing tastes among gamers and markets that shift because of new technology—have kept Humera Malik at Electronic Arts (EA) for 13 years.

Today, as vice president of learning, engagement, and performance for the global video game company, Malik oversees a broad cluster of learning and development roles, from talent development to diversity and inclusion.

It wasn't always that way. When video games were only sold in stores and playing them involved putting a disk into your computer or a gaming console, talent development at Electronic Arts consisted of a corporate university offering a full catalog of courses.

But the video game market changed dramatically when games could be purchased in stores or online and streamed to any device with a broadband Internet connection. Starting in 2013, newly promoted CEO, Andrew Wilson, carried forward his predecessor's vision to reorient EA toward a world in which fewer, more sophisticated games would be played more often by more people. He predicts that interactive entertainment will change more in the next five years than it has in the past 45. And it looks like he's right.

EA games such as FIFA, Battlefield, and The Sims, expanded the playing experience from gaming consoles to tablets and mobile apps. With a single ID, you could play EA games on multiple devices you own or might own in the future.

The games were updated frequently, and EA marketed them aggressively, including to emerging markets in Asia and South America where gaming was growing. EA also began collecting and analyzing extensive data about players' behavior and customizing games for individual players.

By 2013, it was clear that EA University, which Malik headed, was out of date. "We found that a lot of the classes that we were offering in the catalog, people could get faster and cheaper in other ways like watching a YouTube video," she explains. "It made no sense to continue offering courses for common skills like using Microsoft PowerPoint or basic business communication. Also, we were trying to meet the learning needs of a global employee population and those differed from country to country.

"We shifted our focus to talent development aligned with our new business strategy and the employee experience. We were broader than a pure learning organization and we wanted our name to capture that broadness. We went from trying to offer everything for everyone to a business-oriented set of strategic offerings that fit our changing culture."

With the change, EA University became Learning, Engagement, and Performance, known as LEAP.

"Our vision is to help people achieve more than they think possible, which is really about taking leaps. Our new vision captures the essence of who we are becoming."

The new strategy for L&D is to invest only in development about which EA has a strong point of view, such as developing leaders and managers. "In a class about business acumen, for example, we want people to understand what drives our business, and not just general theories about P&L."

Some employees resisted giving up the cafeteria model of learning, fearing they were giving up the possibility to learn whatever they wanted. Today, learning at EA is a responsibility shared with employees.

"Part of what we hire for is an entrepreneurial spirit. We tell employees, 'What do you want to do? Let's create that together.' We want to be a place where people can do the best work of their careers. We try to create an environment that enables them to learn and do their best work.

"Almost every job that I've had at EA in the last 13 years has been a white piece of paper. I've had the freedom to shape and create each one." She adds: "We don't have a cookie-cutter culture. Leadership provides guidelines, but everyone brings their own authentic selves to the work, and that really supports our brand of inclusion. We're not trying to create a culture where everybody looks and talks the same."

Ten years ago, there were about 200 million people, mostly young males, playing video games. Today there are 2.6 billion players around the world, including females and people of all ages. That shift has changed the gaming industry as much as advances in technology for delivering and playing games.

CEO Wilson told Rolling Stone in a June 2017 interview, "We've got the platform, we've got the engine, we've got the creative talent ... so how do we use technology to empower a global population of players to enjoy and experience things that are unique and customized and personal to them on a moment to moment basis?"

Besides refreshing the content of its games continuously and staying ahead of the digital technology players prefer, EA began to gather and analyze huge quantities of data about players' behaviors while they used EA games. The goal was to be a "players first" organization that listened to its customers and built long-term relationships with them.

"We had to do more than entice people to buy our games," Malik says. Providing "live services" to players and focusing on analytics changed the company. "Jobs and functions we didn't have two years ago have grown 200 percent even though employee head count has been relatively flat for a decade. The people we hire and the work they do has changed drastically."

When games became available at stores and online, the sales force had to reboot. In addition to calling on Target or Walmart to sell games on shelves, sales reps had to establish relationships with Amazon and Apple, whose online shopping sites were integral to selling games. As a company with its own digital platform, one of its key relationships was directly with customers. All of that called for new skills.

The analytics function grew quickly, collecting data on how players work alone and together, what they spend time on in a game, and where they get stuck. The use of artificial intelligence in games changed how they are created, how players interact, and how the company supports players. Artificial intelligence has become critical for EA, requiring still more new skills.

"These new skills that are affecting our company are also affecting our learning strategy," Malik says. "With analytics, for example, we created jobs and job families, centralized roles that were scattered around the company, built out learning to support them, and secured the sponsorship of a company leader for analytics." Efforts to build a strong community for the people in these new roles and mapping their roles in the organization helped analytics gain a seat at the leadership table in just five years.

As building ongoing relationships with players became part of the company's culture, the practice of ongoing dialogues led to a change in the performance management system for employees. "We took relationship-building to heart as a company not just with players but with employees. Instead of annual performance reviews, we told managers, 'Have an ongoing dialogue with them.'"

Promoting dialogue among employees and connecting them is "one of the most powerful roles that my team plays," Malik notes. Another is to help people understand and select the best form of L&D for the task at hand.

Like many companies, EA is moving away from instructor-led learning but doing it in a way that transfers knowledge into communities of practice. "The biggest benefit we can provide is bringing them together and giving them a productive forum to exchange ideas and learn," she says.

These forums may be virtual or face-to-face, with a preference for the latter. "We believe in the physical connection because we're a creative company which depends on the blend of art and science. Using technology to connect is core to a lot of things, but the wow factor that you need in entertainment can't be done by an algorithm."

Each year, Malik's unit puts on DevCon, an internal game developer's conference. About 300 people from all areas of game development connect at the event. LEAP organizes a similar event for 400 people who work on EA's game engine. "They share what they're doing and push the engine to its limits. This shows what we need to build for the future."

One challenge of such events, says Malik, is to scale person-to-person interaction and still make it meaningful.

Malik believes it is essential to have sponsors for major LEAP initiatives, whether they come from her boss, the chief people officer, or through outreach to other parts of the business. Several years of consulting in the HR department of a small company built skills that help her be effective at EA; critical thinking, consulting, and selling are among them. "The real key is to meet people where they are and show how you can enable their business."

Years of experience have given Malik a perspective on changes in the talent development profession. "One of the biggest changes I see is how people, our customers, want to consume information. That's shifted our role fundamentally."

With learning options ranging from micro-length nuggets, to daylong immersions, to months-long assignments, talent development practitioners now play a role in giving people choices and also helping them understand the different options they provide and which are best for specific goals. "A two-minute video will not deliver the same results as two days of training. It's our job to explain why."

She also cautions against overdependence on search engines. "We don't want people Googling everything, especially if our organization has a point of view about something." As a growing number of paid-for articles and made-up news created by bots and trolls litter social media, this may become a growing concern of talent development professionals. "What can we do to support and guide informal learning?" Malik asks.

LEAP's mandate goes beyond L&D to include such areas as diversity, inclusion, and corporate social responsibility "At EA, we're broadening the notion of what community really means. We include partner organizations in our communities of practice. For example, we include some that want to bring the next generation of people into STEM education or bring people into gaming as its landscape changes. LEAP includes social responsibility, so Malik's unit addresses how to create safe and inclusive environments online with gamers. They partner with anti-bullying nonprofits that offer ways to support players when they are harassed.

Malik loves her job. Working in Silicon Valley where aggressive talent poaching is the norm, she's been approached about chief people officer jobs at some start-ups. But she finds it easy to resist. "At EA, I operate in a kind of pure space. It's about literally helping people be better and achieve more than they thought possible. It's a really unique opportunity, and I love it."