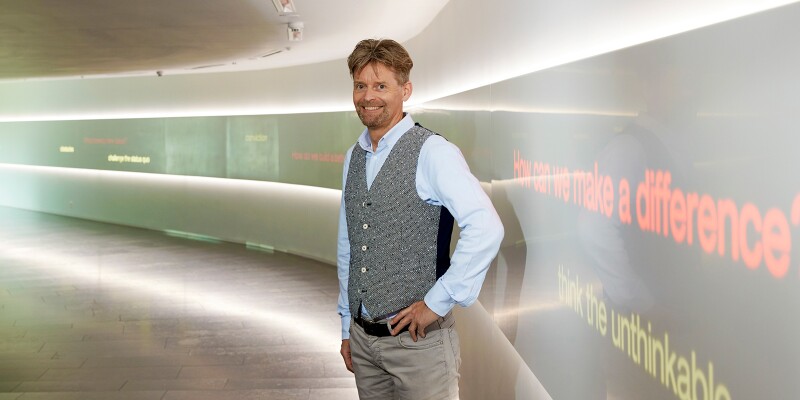 Hilti stands on a leadership model of developing people and achieving outstanding results.

Eivind Slaaen has an unusual commute to work—a 20—minute drive from a small village in the mountains of Maienfeld, Switzerland, to his office in neighboring Lichtenstein. He is the head of people and culture development for Hilti, a multinational company that develops, manufactures, and markets products, systems, software, and services that serve the construction and energy sectors.

Slaaen, who has been with Hilti for almost 30 years in a variety of different roles, is responsible for overseeing the company's global L&D agenda; strategic initiatives, such as employee branding; and its corporate culture. "It's always been our belief that Hilti should have a strong common culture," he says.

Training around culture began in 1984 with an emphasis on the core values, which included helping customers build faster and safer with tools built to take advantage of cutting—edge technology. Since 2003, the company has been running a biannual 2.5—day culture workshop for all employees.

The workshops are designed with input from the executive board. Members of the board of directors take the workshop first, followed by the rest of the organization. Leaders participate twice—once as part of the leadership team and then with their own teams.

"We think of it as our culture journey," Slaaen explains, with a nod to Jim Collins, noted author and consultant on sustainability and growth. New employees are exposed to the global culture during orientation, which covers common practices and values. "That is where the journey begins. The biannual workshops keep it going."

To emphasize the importance of reflecting on the company culture, the workshop includes exercises in which people discuss the core elements of Hilti's culture and think about behavior patterns that support them. In addition, employees reflect on topics of relevance for the whole company.

"Instead of lecturing to people, we have them go through an experience related to the topic," says Slaaen. "Then they reflect on what they learned and how it relates to everyday work life." A large mirror in the room reinforces the idea of reflection. In 2017, employees spent 32,000 workshop days learning about and reflecting on Hilti's corporate culture.

A global organization based in Lichtenstein, Hilti employs 28,000 people in 120 countries. Thus, employees speak a wide range of languages—34, to be exact. On Slaeen's team alone, there are 25 individuals set in five countries and 10 different locations. While English is the main working language at Hilti, the company works with its staff to accommodate different languages.

For instance, the company presents its culture workshops in participants' local languages and has employees nicknamed "Sherpas" to help with facilitation.

"If you're going to do these things, we feel like you have to do it in a language that people fully understand, because that's the reality. You can dream about doing things in English, but that just doesn't work for us," Slaaen explains.

During employees' first year with the company, many are in the field creating enthusiasm for Hilti products and services. During the second year, part of the training includes a week in Srebrenica, a small town in the mountains of Bosnia and Herzegovina. "Our employees build houses there for people who lost everything during the war in 1995. In a week, a team can build three or more houses, which are then turned over to the families who will live in them." There are similar community support activities for Hilti's apprentices.

Beyond the global trainee program, Hilti has several other corporate social responsibility initiatives, where employees can contribute to the welfare of their communities. For example, team members around the world participate in many voluntary projects such as renovating buildings, laying out gardens, or constructing parks as part of a commitment to improving local conditions where they work.

In 2017, Hilti was ranked number 22 on the Great Places to Work global list, as well as ranked the seventh best place to work in Europe. Further, it was named one of the 100 Best Workplaces for Millennials by Great Place to Work and Fortune magazine in 2015 and 2016. To compile the list, the organizers asked Millennial workers to rank companies on job satisfaction, credibility of management, and sense of camaraderie. How is the talent development team fostering an environment that Millennials and other individuals want to be a part of?

"One thing that makes us attractive to young people is that they have access to our leaders who are very transparent about the strategy and purpose of the company. Also, we give people a lot of responsibility early on in their careers with us and we support them with mentoring," says Slaaen. Worldwide, Hilti's workforce has comprised more than 50 percent Millennials since 2012.

He continues, "That makes our job in talent development relatively easy. When we come up with new initiatives, it's not like we have to fight with people on the line to put them in place. We're happy when general managers in other parts of the business claim credit for talent development. Then we know we've found the recipe for success even if we don't get the credit. Pushing development ourselves is not the way to go."

Slaaen says Hilti has likewise increased its focus on diversity and inclusion, transparency, and access to the organization. "We clearly believe that everybody can grow and everybody can have a career." Another attraction for Millennials is Hilti's use of technology. For several years, sales consultants have been helping clients and their architects use building information modeling tools to visualize early stages of building projects in three—dimensional renderings. The company is exploring the potential of virtual and augmented reality to show clients the uses and placement of Hilti products such as its firestop systems.

"We should be concerned about helping people remain employable as things change around them. AI will make its way into more and more products and services, and this will create opportunity, in my opinion," says Slaaen.

Slaaen is also enthusiastic about the prospect of using data mining and interpretation to enrich onboarding experiences and spark creativity and innovation among employees.

"Delving into customer data gets to the heart of an organization's purpose and suggests stories you can tell employees. We spend time telling people what they're going to do and how they're going to do it, but we seldom get into the why." Slaaen thinks deep data will help reveal more about the why and possibly prompt employees be more creative with products and services. "We have to find more ways to integrate data into what we do in the future."

We have an environment of open communication, idea sharing, and best practices. We create organizational excellence by assembling diverse talents. We work together to build a better company for our stakeholders, and we foster an atmosphere of respect, openness, fun, and cooperation.

We treat others the way we want to be treated. We do what we say we will do, and we're accountable for our actions. We apply truth and honesty in dealing ethically with all people.

We know that positive and negative experiences are sources of learning and innovation. We continually break out of the circle of habits by taking risks. We embrace the freedom of choice with the philosophy of "love it, leave it, or change it."

We are passionate about achieving excellence. We have the courage to take risks, and we empower others to do the same. We celebrate success and recognize achievement. We ensure we are vital to our customers.

A Brief History of Hilti

Brothers Martin and Eugen Hilti founded the company in 1941, first developing and patenting tools for working on ships underwater. They went on to design and manufacture products for the construction and energy industries, including pneumatic drills, fasteners, fire protections, and many kinds of power tools and consumables. Over the years, sales have grown from a small base in Lichtenstein, the world's sixth smallest country, to 120 other countries around the world. Hilti now has operations in America, Asia, Africa, and Europe, with 11 production facilities in various countries.

The Great Recession of 2008 had a drastic downward effect on the construction industry in the United States and Europe. By 2013, construction was beginning to rebound in several countries, and Hilti took advantage of this, ramping up its recruiting engine and promoting its employer brand to be better known beyond German—speaking Europe. In 2017, Hilti launched more than 60 new products, strengthened its global sales team, and broke the $5 billion mark in sales. And in January 2018, Hilti CEO Christoph Loos announced that sales were up 10.8 percent and that profitability had increased.