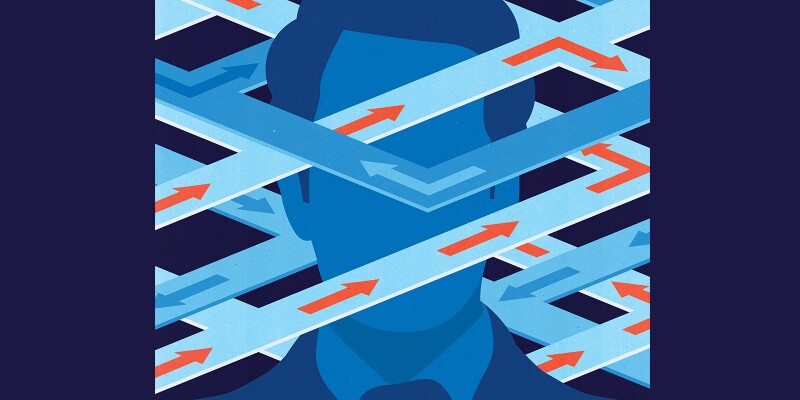 The Struggle Is Real

Tough choices lurk everywhere. Learning how to manage the process of making these decisions and managing their impact is a big learning curve for a leader.

Handling the discomfort and learning to be comfortable with our choices can be a major stumbling block. What's more, few leaders learn how to leverage their discomfort into a source of positive change.

Choices are what define leaders' and a leadership team's success and failure. There are underlying choices to be made in not only pursuing an organization's vision and goals but in simply constructing them.

Choices are challenging, because they present the decision maker with either/or scenarios. Even tougher, choices are occasionally framed as both/and scenarios. Confusing the two types of decisions and how to manage them can have long-term negative effects on a company.

After leading his company's efforts to acquire a business that would give his organization control over its product distribution, Tom was asked to become the president of the newly acquired company. He had proven himself as a calm center of every storm.

The move was not without strife, though. For starters, he'd never led a large organization before. Moreover, it meant moving across the country—something his family didn't relish.

The decision was either/or: Either he would accept the role as president or he would not. He believed in himself, and ultimately his family and community would support the move. It didn't make it easy, but the decision was solvable.

As Tom assumed control of the distribution company, more both/and dilemmas surfaced. For example, he soon had to contemplate whether to create large structural change to enable the parent company's success or lead the company down the path that was the reason it was acquired.

In aligning to the parent company, the issues would be integration, reorganization, downsizing, and a serious amount of stress as the firm dealt with being dismantled to serve a single owner. However, if Tom came to see the world through the lens of his new role and his new organization, he would face a different set of issues.

Tom's tough choice—the both/and choice—is known as a dilemma or a polarity. A dilemma is a choice between two seemingly contradictory but interdependent choices. In other words, choosing one alternative precludes choosing the other.

Framing the problem the wrong way can have real consequences

Framing those types of choices as either/or can seem heroic: The buck stops here.

But those types of dilemmas are the on-ramp to learning and managing more difficult types of choices: both/and choices. That is a different world of decision making.

As leaders, we encounter common dilemmas in the form of long- versus short-term focus, relationship versus task focus, planning versus implementation, speed versus quality, and so forth. In these decisions, real value is either added or subtracted from the organization.

It can be a monumental error to think of these as alternative choices. The stress and pressure of goals and deadlines can force us to look at both/and choices as either/or choices, so we can make the heroic choice between the two propositions and potentially erode less-than-transparent value. We often overlook the role organizational culture can play in forcing us to see the either/or option and seek out rewarding our heroism as leaders.

But it's important to arrive at a solution that gets the best of both sides of the dilemma, not simply try to swing from one side to the other and back again. Too often, leaders opt to focus on one choice for a period of time, then focus on the other choice.

That is just delaying the real choice. We think we're being heroic, but in reality, we're kicking the can down the road for another leader for a different time. Sound familiar?

Leading is a series of dilemmas

Linkage's research reveals the inherent tensions in leading. Leaders face questions such as:

It's easy to think that we will pursue the right answers to each of those questions—that is, until we're under pressure or tempted by a personal benefit or even the reduction of personal pain.

But leaders don't typically start with the big, difficult, economically important dilemmas. We start with dilemmas that are much easier to handle: the employee who is delivering results but not really contributing their best, the employee who may be cutting corners on quality but is highly productive, the occasional employee romance, or the outstanding employee who has cheated on an expense report. Those are situations that are easy to objectify and to see the different issues and concerns.

Then we may step up to tougher scenarios that involve ourselves: taking credit for an employee's work, discounting for a favorite customer but not others, making the results in a report look better than they really are.

Making decisions inside these scenarios require self-awareness and a strong sense of ethics and values. Now, we must do the courageous thing, not necessarily the heroic thing.

To lead is to be the catalyst for what happens around tough choices. Leadership is founded in these dilemmas and in the value that resolving them can bring to an enterprise. Consider these options to help you when tough dilemmas present themselves.

Build your awareness of the context. As a purposeful leader, context is critical to understanding what is happening from all angles. While not every dilemma requires you to do something about it, it's also true that acting too quickly may mean inadvertently having an impact on one side of the dilemma.

In addition, there will likely be urgency to take action quickly. Of course, taking the time to fully absorb the context is a decision that carries its own short- and long-term consequences. Many may accuse you of not taking action and doing nothing.

For instance, while Tom was under pressure to begin integrating the new company, he understood the importance of taking time to gather input from a broad network of stakeholders. More importantly, he gave himself the time to let his feelings adjust to his new role and responsibilities and how that changed his worldview and perspective.

Develop a goal that everyone can share. The purposeful leader is motivated to find a way—any way—through the dilemma. That usually involves setting a goal. Leaders must cut through diverse needs, stakeholder agendas, and situational politics to create a goal that seems to invite the best of both sides of the dilemma.

For example, Tom needed to make difficult decisions while also building credibility with both his new and former colleagues. Although one set of options would present pain for his long-time peers, the other option could hurt those he was just getting to know. Tom felt the pressure of choosing sides. He had to search inside himself and dialogue with others about what the best decision would be.

Get a handle on the worst outcome. Dilemmas can be tricky. One side of a dilemma will present benefits; the other side will have challenges, risks, and liabilities. Leaders need to lay out any existing negatives and find ways to scan for future risks that a potential decision exposes.

In our example, Tom was careful to craft his messages to help people understand that every day was about creating a new way of doing things and that an accumulation of everyone's work would have the impact that they were looking for to be successful. He also enlisted everyone's help in looking for what they saw emerging and whether it was what they intended to create.

Dilemmas require courage. A safe way through a dilemma is to spend time on one side, then the other. Ultimately, that will eat up precious time and move nothing forward.

It's the equivalent of doing nothing but showing action. The courageous thing to do is find the creative, generative solution—even if it means choosing the hard way.

Tom learned about courage earlier in his career when he ran the sales force and had to deal with challenges surrounding bonuses and commissions. In particular, salespeople were closing accounts that won them bonuses but led to extra work and overtime for the operations function, which would receive no reward or recognition for its efforts.

As his thinking took on more of an enterprise view, Tom started to see the impact the sales team was having on others. However, if he removed the troubling element—rewarding the sales team regardless of their operational impact—they potentially wouldn't meet their goals.

So, he took on an effort to modernize and widen the way bonuses and incentives worked across the enterprise, encountering a great deal of friction from the employees he had hoped to benefit. But he didn't back down.

Like Tom, we need to allow our belief in colleagues and the organization to give us the strength of commitment we need to pursue difficult paths. We may be called obstinate at the start, but eventually, others will see the courage and integrity in our decision making.

Resolution is about values, vision, and your personal signature. Tom's efforts in finding a way past a big dilemma ultimately proved successful and created millions of dollars of economic value. He blended both companies' needs by carefully articulating the vision and values of the reorganization in ideologically attractive terms to both companies.

His conviction that the acquisition would work for both companies focused on the positives, not the trauma. He became partisan and a champion for his new organization and his new peers, but he helped his former peers to see what he saw. In the end, his reorganization was his signature move.

But as successful as it all was, Tom could also see new dilemmas emerging. Indeed, as leaders, we are beset by many dilemmas that arise from the opposing sets of demands made upon us.

While there is danger in making decisions, the mindset of finding value creates real rewards. It's easy to feel that you are being tortured by the two propositions, and it's tempting to simplify to the heroic resolution. But the purposeful leader resolves these tensions to enable true value creation and competitive advantage.

About the Author
Mark Hannum

Mark’s focus has been on understanding and improving executive processes and decision-making. Through his work with executive leadership teams, his clients have credited him with helping them manage difficult risks, improve business operations, lead through acquisitions and integrations, and take advantage of growth opportunities.

About the Author
Jennifer McCollum

Jennifer McCollum is CEO of Linkage, Inc., where she oversees the strategic direction and global operations of the Boston, MA-based leadership development company. She has 20 years of experience building and leading businesses in the leadership space. Her expertise includes bringing analytic rigor to critical talent decisions by linking leadership behavior to corporate performance outcomes. https://www.linkageinc.com/