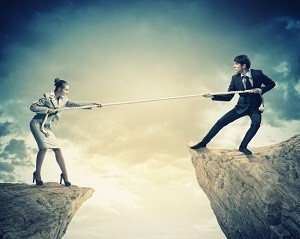 Learning methodologies are cheat sheets. The ADDIE methodology (analyze, design, development, implement, evaluate) was developed by Florida State University for the U.S. Army as a repeatable and standard set of tasks to create training. At the time of its creation, similar methodologies emerged in other areas.

For example Tom DeMarco, Ed Yourdon, and Larry Constantine were developing SSADM (structured systems analysis and design methodology) for data processing's growing complexity. In all cases, methodologies allow teams to follow a repeatable series of steps, adjusted for the context of their project, to drive speed and quality. These methodologies were called Top Down and later Waterfall, and that's where the problems began to emerge.

David Parnas (U.S. Naval research), in “A Rational Design Process: How and Why to Fake It,” writes: "Many of the [system's] details only become known to us as we progress in the [system's] implementation. Some of the things that we learn invalidate our design and we must backtrack."

Top Down doesn't backtrack easily. It's more start over than backtrack, and no one wanted to do that. Imagine painting a family portrait and then having to add another person to it. The IT industry tried to mitigate Parnas' reality by creating RAD (rapid application development). Requirements were gathered and upfront focus groups with critical stakeholders and iterative prototyping were used to drive design and development. This solved most of the backtrack problem, but many IT teams struggled with prototyping that would never end. They called this death spirals.

SAM (Successive Approximation Model), created by Allen Interactions, has emerged as an alternative to ADDIE, especially when doing e-learning solutions to drive performance improvement. The kickoff focus group is called Savvy Start, and the risk of death spirals has been mitigated through three design and three development iterations. Allen Interactions's philosophy maps the purpose of this methodology toward driving performance.

The current iteration of methodology is “Agile.” This approach challenges not only the accountability of roles and ownership of deliverables, but also flies in the face of current multitasking project work. The primary difference in this approach is that smaller chunks are completely finished through locked-down teams in a fixed period of time (sprints). This is not prototyping—the deliverables are complete, useable components.

In my opinion, true Agile is difficult to implement in typical corporate organizations and cultures without creating a new and independent organization. The chief energy officer of Torrance Learning, Megan Torrance, has been successful in using Agile approaches to deliver e-learning to their customers through LLAMA (lot like Agile methods approach), their unique approach to agile.

So, there you have it: a brief breakdown of the methodology wars. It’s up to you to decide which works best for your design plans. For a deeper dive into the various learning methodologies, join me for the next online workshop, Essentials of Learning Design Methodologies: ADDIE, SAM, Agile, and More.

About the Author
Lou Russell

Lou Russell is president and CEO of Russell Martin & Associates. She is the author of the ATD Press books Project Management for Trainers, Leadership Training and 10 Steps to Successful Project Management, among other titles. In addition to her many books, she contributes frequently to Computer World, Cutter Executive Reports, and Network World, among others, and publishes Learning Flash, an electronic newsletter.

Lou speaks at several national and international conferences, such as the Project Management Institute, Project World, and LotuSphere. She holds a bachelor's degree in computer science from Purdue University, where she taught database and programming classes, and a master's degree in instructional technology from Indiana University.